The film neither endorses nor repudiates its subject's racism. The result is a slick, dangerous work of propaganda 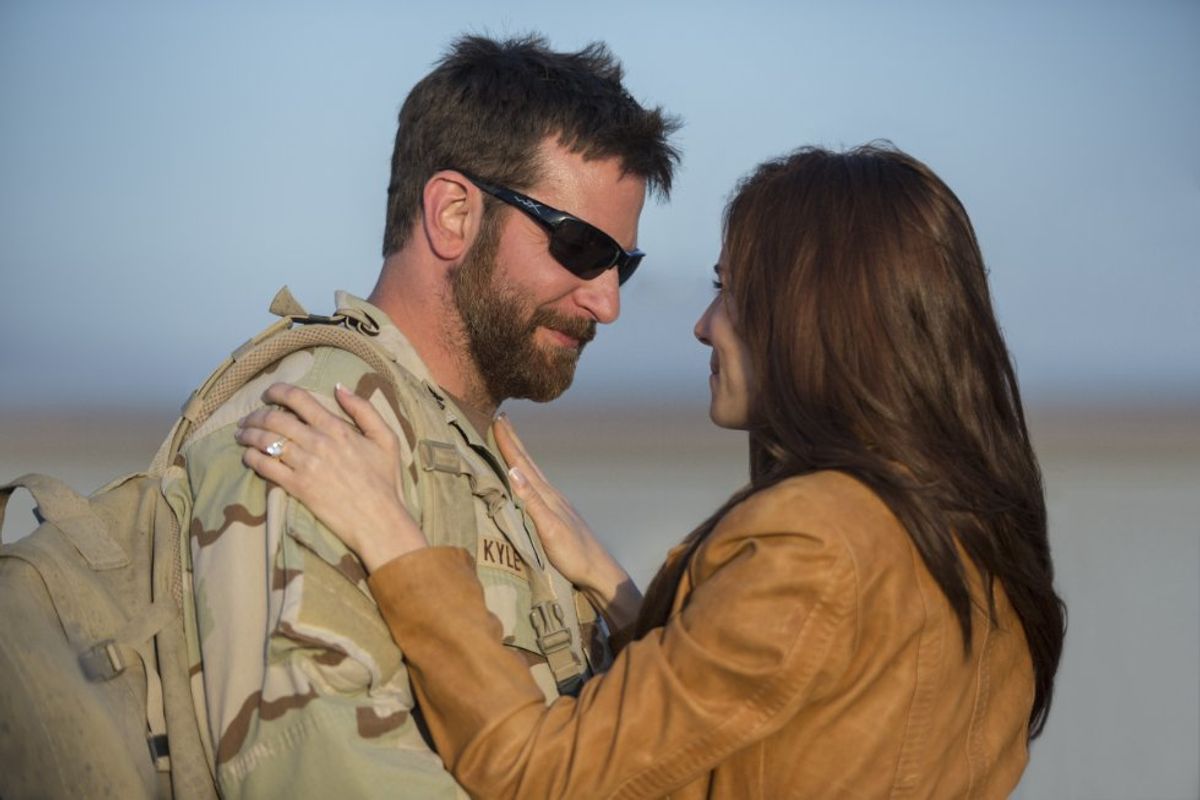 Three weeks into American Sniper’s record-breaking release, you likely already have an opinion on the film, even if you haven’t seen it. In a tweet, comedian Seth Rogen famously compared it to "the movie that's showing in the third act ofInglourious Basterds,” whereas documentarian Michael Moore called it a “mess of a film.” The debate has largely focused on the portrayal of Chris Kyle, American Sniper’s protagonist. Eastwood and screenwriter Jason Hall depict him as an “anguished soul” (in the words of author Max Blumenthal), torn between saving his country and the weight of deciding who deserves to die.

But the real-life Kyle was anything but tortured and morally conflicted. The Guardian’s Lindy West (also a contributor at the Daily Dot) reminds us that Kyle was “a racist who took pleasure in dehumanizing and killing brown people.” Kyle's only regret was that he didn’t kill more.

More from The Daily Dot: "Jimmy Kimmel's latest 'Mean Tweets' is meaner than ever"

While American Sniper doesn’t shy away from Kyle’s racism—he routinely refers to Iraqis as “savages”—the Wrap’s Inkoo Kang says that it’s an “epithet Eastwood doesn’t necessarily endorse, but doesn’t repudiate, either.” This is because the movie so narrowly zeroes in on Chris Kyle as a character that it forgets to take even a basic stance on the morality of what he’s doing—and not a single other person in the film comes across as a flesh-and-blood human. At home, Kyle’s wife (played by Sienna Miller, master of the cry face) nags him about not being there for his family, in the proud tradition of underwritten movie spouses. The lack of character development is doubly true about the film’s Arabs, who are barely written if they’re written at all.

We can debate about the film’s glamorization of Chris Kyle until the cows come home. After all, he’s dead and can’t argue back; Kyle was killed in 2013 while mentoring a soldier with PTSD. However, why haven’t critics of the film given a more thoughtful critique of the characters who don’t get to be in the film, the men, women, and children that Kyle kills? According to Kang, “not a single one of [Clint Eastwood’s] Middle Eastern characters are endowed with basic motivation, let alone humanity,” and few of them even get lines. The film’s antagonist is a former Olympic sharpshooter, Mustafa, rendered all but mute during the film. (If he had a line, I missed it.) While Chris Kyle may be far from perfect, his flaws actually get presented on screen, where Mustafa is simply a caricature of an evil Arab, draped in all black with Rudolph Valentino eyeliner. Who is he? We never really find out.

If his character feels light, there’s a reason for that: Mustafa was barely in the book. Chris Kyle’s memoir devoted all of two sentences to Mustafa, one of which is a simple dismissal from Kyle (“I never saw him”). The film’s other Big Bad, the Butcher of Fallujah, is seen brutally torturing Iraqi villagers, and at one point, he kills a young boy with a handheld power drill. However, as the Village Voice’s Amy Nicholson reminds us, the Butcher “was captured in September 2009, one month after Kyle left the Navy.” As Kyle himself put it, these men represent a “savage, despicable evil,” and the film’s other characters aren’t any more nuanced, even if they’re children. Blumenthal writes, “I counted four Iraqi child characters in American Sniper. Two were ‘terrorists.’ One was son of a ‘terrorist.’ The fourth was tortured to death.”

At best, this portrayal of the Iraqi people is lazy, and at worst, it’s racist and outright dangerous. “Every single Iraqi in the film is presumed guilty, and thus, deserving of the twisted justice Kyle is more than willing to dish out, over and again,”write Khaled A. Beydoun and Abed Ayoub in Al-Jazeera. Beydoun and Ayoub argue that American Sniper portrays all Arabs as the same: “unyieldingly wretched, menacing, and bent on the destruction of everything pure and civilized.” In the world of American Sniper, to be a Muslim is to be a Jihadist. Beydoun and Ayoub continue: “For Kyle, and Eastwood, the distinctions are irrelevant. Redeploying age-old Orientalist images, the film's Iraqis are thinly constructed foes of the democratic and divine—who must be methodically gunned down for both God and country. A belief, in the U.S. today, that is far more fact than fiction.”

As the writers note, Clint Eastwood’s film joins a long legacy of Orientalism in Hollywood cinema, portraying Arabs as a singular “Other” lacking humanity. In Disney’s Aladdin, you can spot a good guy by how white they are. Whereas the villainous vizier Jafar has a twisty beard and cat-like eyes, Aladdin is the “diamond in the rough.” He’s depicted as fair of skin and square of jaw, a kid you could more easily picture shucking corn in Nebraska than roaming the streets of Baghdad with his pet monkey. The film’s opening number, “Arabian Nights,” underscores how different Aladdin is from the city he lives in: “Oh I come from a land, from a faraway place/Where the caravan camels roam/Where they cut off your ear/If they don’t like your face/It’s barbaric, but, hey, it’s home!” (The lines were later edited after protest.)

But Aladdin's racist good Arab/bad Arab dichotomy is just the tip of the iceberg when it comes to Hollywood’s bad history with the Middle East. As Lucy Ward notes in the Guardian, the Bruce Willis-Denzel Washington thriller “The Siege…[intercuts] Islamic ritual and terrorist violence, potentially linking the two in the minds of audiences,” and even films like Back to the Future relied on racist caricatures of Libyan terrorists for their insta-villains. All you need to do is add water. In Jack Shaheen’s Reel Bad Arabs, the author and film scholar writes that the movie and TV industries are obsessed with “belly dancers, billionaire sheiks, and bombers,” from 24 on TV toSyriana, Delta Force, Rules of Engagement, and Iron Man on the big screen. In Father of the Bride Part II, Eugene Levy appears as Mr. Habib, whose only role in the movie is to rip off Steve Martin’s clueless patriarch. The film, of course, has no other brown characters.

Last year, the Washington Post branded Homeland as the “most bigoted show on television” after its fourth season posters portrayed Carrie Mathison as a “a blonde, white Red Riding Hood lost in a forest of faceless Muslim wolves,” but the show’s problematic portrayals of Muslims is par for the source by this point. Remember that scene in True Lies where Arnold Schwarzenegger kills Salim Abu Aziz “by launching him to his maker on the back of a missile,” as blogger Richard Landes puts it? How about that time Indiana Jones shoots an Arab wielding a sword and shrugs like it’s no big deal, presumably because brown lives don’t matter as much as Chris Kyle’s?

These representations wouldn’t be so damaging if we were ever presented with alternatives, but aside from Omar Sharif in Lawrence of Arabia or Little Mosque on the Prairie and Aliens in America, the Butcher of Fallujah and Mustafa are just about all we get. As filmmaker Eyad Zahra claims, “in every movie [Hollywood makes], every time an Arab utters the word Allah...something blows up.” According to the Guardian’s Nasar Meer, the repetition of these images reinforces prejudice as a “self-evident, common sense truth.” Meer writes, “This is insidious because as most of us surely know: attitudes affect behavior. As the Open Society Institute found in 2004, 80 percent of British Muslims have reported being a victim of Islamophobia.”

American Sniper is being released at a particularly inopportune time for Muslims. As Al-Jazeera reports, there has been a “50 percent increase in the number of reported hate crimes against Arabs [and] Muslims” in the U.S. since the “Ground Zero mosque” opened in 2011. The recent Charlie Hebdo attack has recently led to a wave of anti-Muslim violence in France, with 15 incidents since the shooting on Jan. 9. The response toAmerican Sniper further shows this Islamophobic rage playing out over the Internet. Twitter user @Theboghdady said thatAmerican Sniper “makes me wanna go shoot some f**kin Arabs,” and @harshnewyorker added, “Nice to see a movie where the Arabs are portrayed for who they really are—vermin scum intent on destroying us.” Critics of the film have also gotten death threats.

Muslim groups have asked Clint Eastwood and Bradley Cooper to speak out against the violence and take a stand against Islamophobia, but Cooper has thus far shied away from the debate by insisting that American Sniper “isn’t political.” While that statement likely means that the film doesn’t take an overt stance on the morality of the Iraq War, just because American Sniper doesn’t take sides doesn’t mean it doesn’t make a statement. Any movie that, yet again, goes to Middle East without saying anything meaningful about the Iraqi people who deal with this violence day in and day out is political. Any movie that makes Arabs another voiceless mass for white heroes to play target practice with is inherently political. Any movie that, through its profound lack of empathy, encourages more men to be like Chris Kyle is political.

During Unforgiven’s most famous scene, Clint Eastwood’s Will Munny laments the senseless of violence. “It’s a hell of a thing, killing a man,” he grunts. Someone should tell Eastwood that it’s also a hell of a thing being killed.