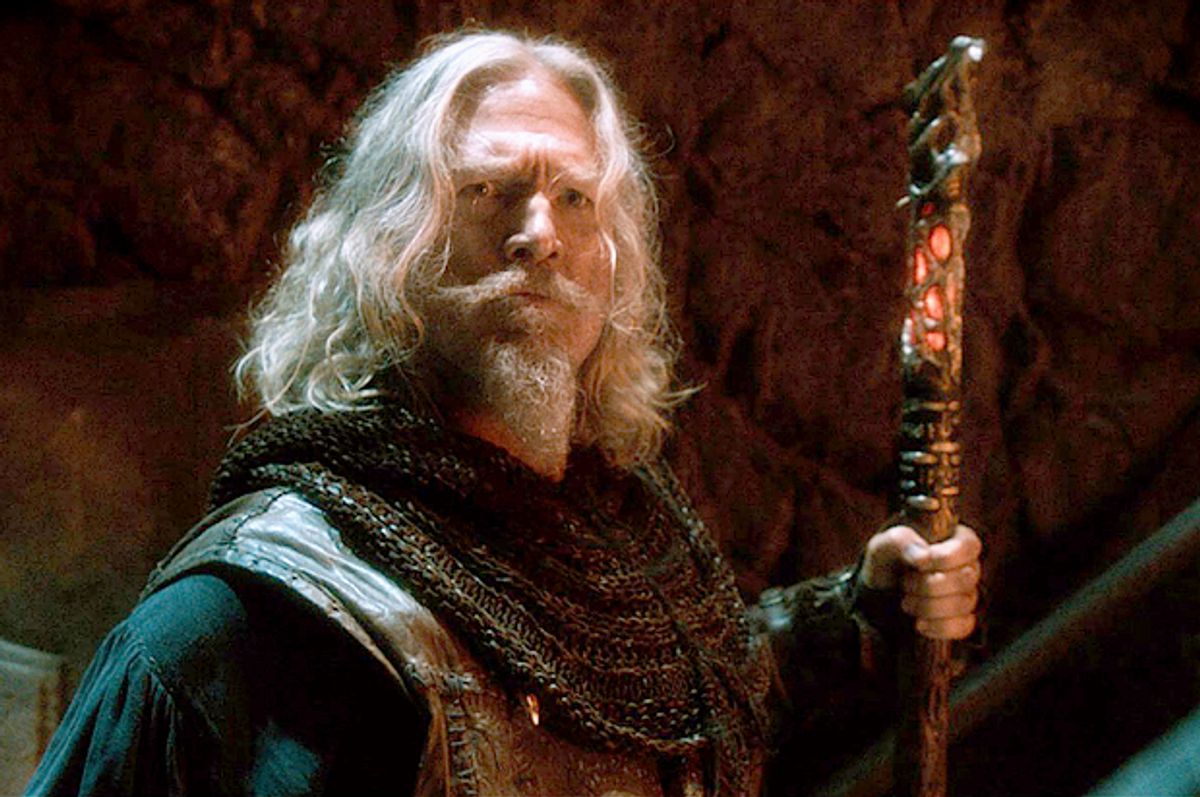 I sat through more than four hours of doomed, cluttered and alarmingly expensive 3-D action-adventure fantasy movies on a single afternoon this week, so that you don’t have to. Please remember that I am battle-hardened from many years of snark and superiority and semi-comfortable theater seating; please don’t try this at home. Other than a moderate brain-worm headache, a sense of time-space dissociation that may not be permanent and an urgent need to drink four glasses of wine rapidly (it may have been five), I suffered no ill effects. I am ready to answer the important questions: Between “Seventh Son” and “Jupiter Ascending,” the twin unloved CGI monstrosities of February, which one more closely resembles a Wachowski siblings’ film, and which is more like a mid-‘90s World Wrestling Federation pay-per-view event?

Appealing as it is to do a compare-and-contrast on these two movies, which are forever welded into one magnificent whole in my mind, they both hypothetically deserve individual attention, and anyway I don’t want to violate the Seventh Commandment of the Internet: Thou shalt spread the fanboy clickbait across the field, like unto flaxseed and coriander. So we begin with “Seventh Son,” which is not a Wachowski film but quite likely could have been or should have been. It’s directed, far more strangely, by Sergei Bodrov, a veteran of the Soviet and Russian film industry who has twice made Oscar-nominated foreign-language epics (“Prisoner of the Mountains” in 1996 and “Mongol” in 2007.)

Bodrov undeniably brings a sense of space, scale and historical depth to this warmed-over fantasy, and his key collaborators are top-flight Hollywood technicians, including cinematographer Newton Thomas Sigel and production designer Dante Ferretti. There are a few early scenes where “Seventh Son” feels like Tarkovsky’s “Andrei Rublev,” remade with giant lizards and loud noises. In fact, it’s loosely based on a YA novel by Joseph Delaney called “The Spook’s Apprentice” (very loosely, according to Delaney's fans), and it’s a thoroughly incoherent, generally inane and surprisingly entertaining tale of witches and monsters and what legendary film critic Joe Bob Briggs calls “beast fu,” all set in a sub-Tolkien, sub-“Game of Thrones” pseudo-medieval universe.

That description may make “Seventh Son” sound totally pointless. Which, essentially, it is! But there are reasons why you might consider seeing it anyway. Those primarily comprise Jeff Bridges and Julianne Moore, the former as a bearded, boozy witchfinder or exorcist named Master Gregory, who splits the difference between Jeff “The Dude” Lebowski and Rooster Cogburn of “True Grit,” and the latter as Gregory’s sexy, evil, reptilian nemesis, an ancient witch called Mother Malkin. When in human form, Mother Malkin resembles an aging East Village Goth-princess type, who eyes Gregory’s hunky new apprentice, Tom Ward (Ben Barnes), with Ur-cougar hunger. “A boy!” she purrs, slithering across the digital ruined-castle backdrop like a cobra turned fashion model. “I like boys.”

The only truly interesting direction “Seventh Son” could have gone from there is for Tom to abandon his irritating, virginal girlfriend Alice (Alicia Vikander), who is Mother Malkin’s granddaughter or something, and swear to be Moore’s scale-polishing slave for all eternity if she’ll just say stuff like that once in a while. I seriously think Moore gives a better performance in this stupid movie than she does in “Still Alice,” which is going to win her an Oscar for playing a smart woman who has Alzheimer’s. The stakes are lower, I guess, and there’s no reason to aspire to naturalism, but she’s having a much better time. Mother Malkin is nothing more than an exceptionally literal-minded illustration of the maxim that hell hath no fury etc., but Moore owns every second of it, making us feel the character’s destructive anger and self-hatred, and also the fact that she still loves the man who turned out to be not that into her several millennia earlier. (He locked her in an underground cistern sealed with silver and dirt from the Holy Land or something. And not in a fun, frolicky “50 Shades” way, either.)

As for Bridges, I can’t quite decide whether he’s pulling everybody’s leg – like, he has no idea what this movie’s about or what Master Gregory is supposed to be doing – or delivering a classic work of Jeff Bridges laconic weirdness. Which leads to the intractable philosophical question of whether there is any difference. Again, he’s having much more fun in this ludicrous spectacle than he did in the desiccated spinach of “The Giver,” so I’ll take it. There are scenes when Master Gregory mumbles his lines in a somewhat-Russian or “Old World” accent, and others when Bridges appears to be auditioning for the role of King Lear in Central Park next summer. I’m going with the theory that since “Seventh Son” has no core identity and no reason for existing, Bridges took that on his shoulders: What inexplicable new personality will Master Gregory reveal in the next scene?

So why does this movie exist? And what the hell are A-list actors like Moore and Bridges doing in something that seems so clearly destined to perplex insomniac Starz viewers several weeks from now? I have two words for you, or at least two proper nouns: China and Jennifer Lawrence. The “Hunger Games” star was originally going to play the boring role of Alice, and good for her for figuring out it was a dud. Lawrence didn’t take the part and neither did a lot of other actresses (according to gossipy reports), and somewhere along the way China’s state-owned film company poured a bunch of money into this project, either because no one told them that Lawrence was no longer on board or because they didn’t understand that swapping her out for Alicia Vikander (who is Swedish and pretty and I’m sure a perfectly nice young lady) was the “Andrei Rublev” tolling bell of doom. So Bridges and Moore got paid and tried to make something out of nothing, because they’re professional actors. There are dumber reasons why movies get made, though not a lot dumber.