A father keeps his Down syndrome baby -- but does that make him a hero? 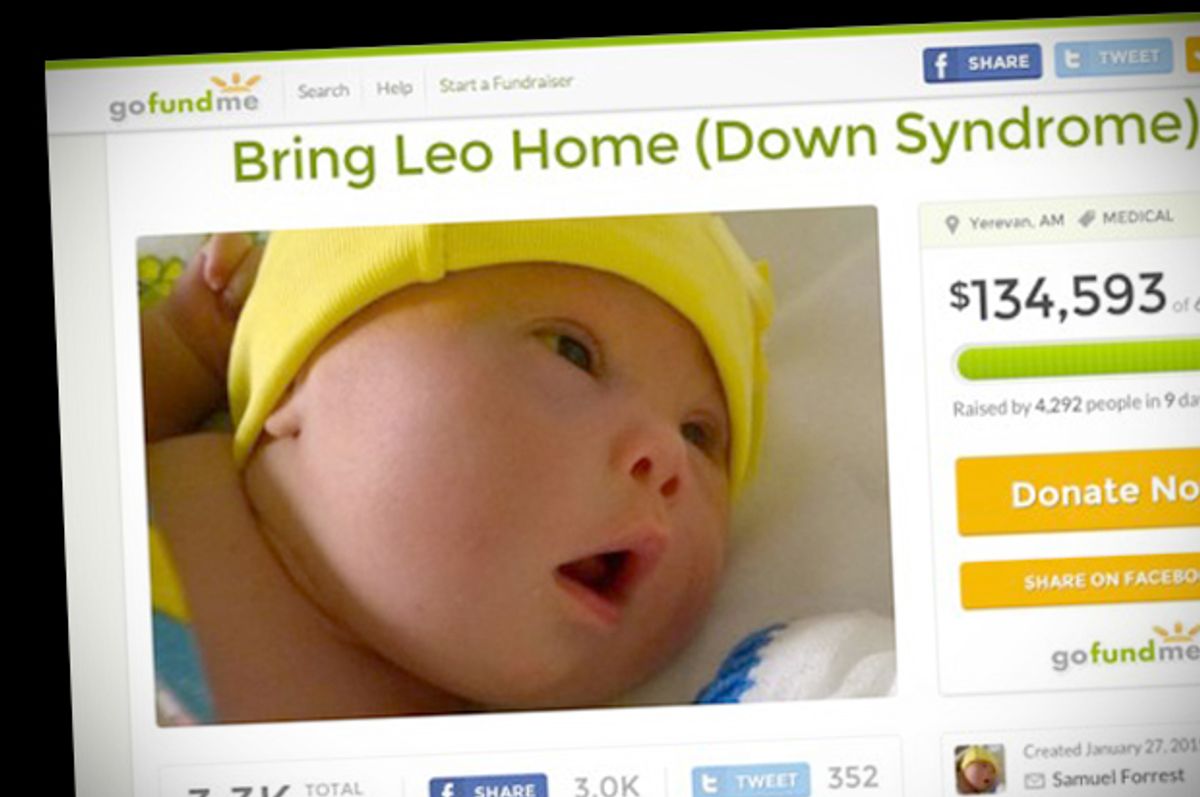 It's a touching story of a father's devotion, one that has rocketed around the world. But the outpouring of accolades for Samuel Forrest and his new baby son also reveal a whole lot about the media's predictable rush to judgment – and about how very differently we view the love of fathers and mothers.

Forrest, who is from New Zealand but currently lives in Armenia, tells ABC News this week that when his son was born, "This pediatrician walks out of the room with a little bundle -- that was Leo. She had his face covered up and hospital authorities wouldn't let me see him or my wife. When the doctor came out, he said 'There’s a real problem with your son.'" He says he was then led into a room with the medical staff, the baby and his wife, and that "When I walked into the room they all turned to me and said 'Leo has Down syndrome. I had a few moments of shock." But, he says, "I looked at this guy and I said, he's beautiful -- he's perfect and I'm absolutely keeping him." His wife, however, felt differently. He claims, "I got the ultimatum right then. She told me if I kept him then we would get a divorce…. What happens when a baby like this is born here, they will tell you that you don’t have to keep them. My wife had already decided, so all of this was done behind my back." A week later, she filed for divorce. Leo's mother has told to ABC News only that she had a Down syndrome baby, that the child is with his father, and that she his father are no longer together.

Forrest, a business contractor, has now launched a GoFundMe page to "Bring Leo Home" so he can return to New Zealand. He says, "This really came out of the blue for me. I don’t have a lot; I have very little in fact. The goal is to raise enough for a year so I can get a part-time job so Leo doesn't have to be in daycare and I can help care for him. He's lost a lot in two weeks. It'd be different if he had his mommy."

The headlines have been heart-tugging: a study in contrasts been apparent callousness and compassion. "Wife files for divorce after husband refuses to abandon baby boy who was born with Down's Syndrome." "Meet The Dad Who Refuses To Abandon His Newborn Son With Down Syndrome." The Independent reports that Forrest's fundraising efforts have yielded $180,000 so far, money he says "will be used to secure better living conditions in Auckland, and to give Leo higher quality opportunities when it comes to education."

There is certainly evidence that Armenia has a high population of abandoned children. A 2012 feature in Armenian Weekly on the country's "social orphans" problem noted that "Over 80 percent of children in orphanages have at least one living parent…. there are 23 special education institutions for those with mental and physical disabilities, and 8 night-care (boarding) institutions, where children from poor families spend most of their time… High unemployment, poverty, and migration contribute to parents' inability to care for their children. And a 2012 feature for EurasiaNet noted that many of the nearly 5,000 children living in state run orphanages "live in the facilities because their families, quite simply, cannot afford to raise them."

A 2012 Unicef report on "children with disabilities in Armenia" stated that while progress is being made, "Thousands of children with special needs in Armenia are still isolated from their families, peers and communities and live in orphanages and special boarding schools." It also noted, significantly, that while 12% of Armenian children with special needs have single mothers, only 1% have single fathers. And while the situation in Armenia is still extreme – families of special needs children there face profound economic challenges and social isolation – the data here in the US shows some similar patterns. A 2000 Census report on Disabilities and American Families found that "Families with a female householder with no husband present were more likely than other family types to report having members with a disability…. One in every three families with a female householder with no husband present reported members with a disability." In the US, we are currently at an all-time high with single father-headed households: a whopping 8%.

If Samuel Forrest's tale is as he describes it, he is then unquestionably a caring father who is giving his child a chance for a far better life than the one that thousands of Armenian orphans are enduring right now. And little Leo deserves as much assistance and acceptance as every other child in the world. But in the rush to turn this into a tale of a heroic father and a heartless mother, consider that it may be more complicated than that. Consider that we don't know the details of the family's financial situation, or the mother's cultural conditioning. Consider that it is a common daily event, around the world, for mothers – and not just mothers of special needs children – to find themselves suddenly alone to raise their babies. Consider the single mothers who choose to adopt special needs kids. Yet they rarely get applause or outpourings of donations for it. Instead, when moms raise children alone, they get excoriated as "bad for society." Why do you suppose that is? I hope Leo and his father have a wonderful life together. And I hope the support they're getting right now radiates out now to all loving and fearless single parent families -- male and female.