Community Discussion: How should we approach anti-vaxxers? 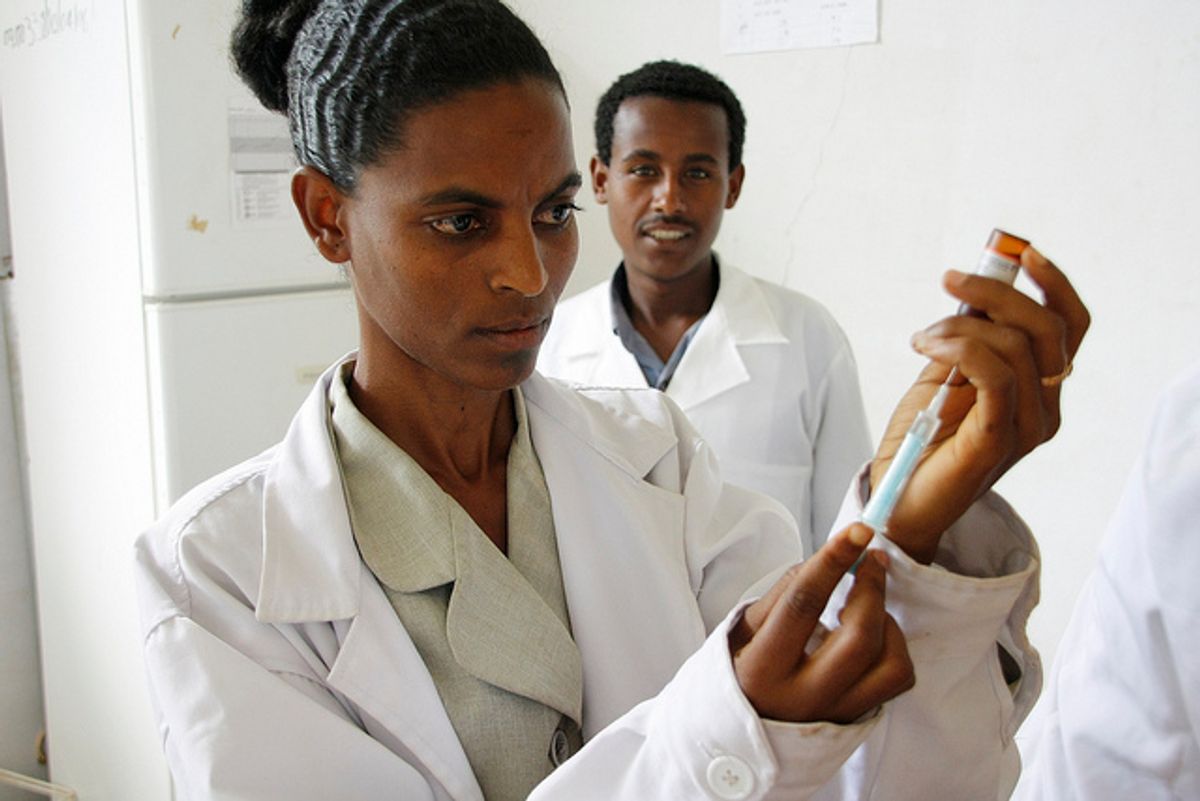 It's been almost a month since an outbreak of measles turned the anti-vaccination movement from B-list celebrity delusion into an actual threat to public health and the reaction has similarly evolved from fodder for late night comedy into honest-to-goodness talking points for potential 2016 presidential candidates. The culmination came on Tuesday when John Boehner was compelled to interrupt a diatribe against taxes and immigration to assure the nation that, yes, the GOP believes you should vaccinate your children.

Anti-vaccination is one of the Salon community's most vigorously debated issues and this time has been no different. Many readers shared memories of a time, not too long ago before, widespread vaccinations were available.

Me and my sister got measles when we were kids and man, were we fd up from it.  Our family GP made house calls back then and he ordered my Mother not to bring us anywhere near his office or other people because of how easily and quickly it spreads.

When my fever approached 104, I got the ice bath dunk.  Doc came running because he said by the time an ambu got to the house and then to the ER, I'd be a parsnip.  Sister's fever didn't spike quite as high, but I remember her crying and crying and crying trying to squeeze her temples and stop her head from pounding.  Of course the crying just made it worse.

I was a zombie.  Doc kept doing reflex tests on me to see if anybody was home 'cause I just stared off and breathed this nasty ratchet-y sound.

We had measles down our throats, so couldn't drink juice or anything acidic.  On the bottoms of our feet and toes, so we couldn't walk, though they were all over our backs, backsides and stomachs, so it wasn't like there was any position that was comfortable.

And I forgot until I got fitted for contact lenses, on our eyeballs and inside our eyelids.  Good times.

I asked my Mom if she knew I have measles scars on my retinas.  She was like, Don't you remember me taking photographs of you and your sister?

Ho my gad, she still has them.  They're horrifying.  Straight out of the Mutter Museum.  We look like monsters.  I look like a corpse, my sister looks like a swollen polka-dotted balloon.

But yeah, by all means, infect and possibly kill other people instead of owning up to the fact that your kid's autism is genetic.  That's reasonable.

Guerrilla surgeon recalled the misery of pre-vaccine inoculation techniques and the victims of diseases that are now easily preventable.

Another part of the problem is that these people are too damned young to remember the problems caused by non-vaccination. When I was a boy there were no vaccinations basically, and my mother took me around – aged about 4 or 5 to every sick kid she could think of, so that I could catch all those childhood diseases early. Which was probably not a bad thing to do given the circumstances, but it gave me a couple of really, really miserable years, because these diseases aren't much fun.

Also when I was a kid, there were plenty of people around who'd had polio. On crutches, with leg braces, and occasionally in an iron lung. I have a friend who is profoundly deaf because of measles, and another who lost a testicle because they had mumps in adult hood. And to be honest I've no idea what we can do about this. Perhaps a couple of decent lawsuits from people whose kids have been infected, or people who have been permanently damaged by these diseases? Nothing like hitting the middle classes in their pockets.

Like Guerrilla surgeon, many readers wondered at the root of the decision not to vaccinate a child and what to do about it. CyclingFool linked it to concerns over food and hoped anti-vaxxers could be educated and convinced.

I wish someone would publicize the outcomes for all the measles cases currently in the news. How many kids have had lasting effects, like deafness, encephalitis or blindness? If a kid dies, it will be reported, but we need know the full effects.

The "natural" crowd generally doesn't believe in the autism link. There is a strong and growing movement about knowing the sources of our food, so it's little wonder there is concern about what is injected into children's bodies. These parents need to be convinced that though the vaccines aren't perfectly natural, sometimes compromises need to be made. (Most of these parents have very young children over whom they have almost complete control. They are likely to be more flexible as their kids grow into their teens.)

The news has been saying that about half of kids with measles are hospitalized, but it isn't said why. Are the natural parents hospitalizing their kids? They are more likely to keep them home because they know their kids will be terrified. What are the outcomes? Will the anti-vaxxers be willing to take a 5% or 10% chance of permanent damage?

I don't know if changing these parents' minds is even possible. After all many believe that homeopathic water has a "memory" and that microwaving water can change its "structure". This is religion, not reason. If their children are kicked out of public schools, they will set up their own schools, just as many other religions have.

After an unsatisfying debate on the Nightly Show, Rrhain argued for a more decisive response.

Why was nobody pushing back on the anti-vax lady?  Her claim that there was a whistle-blower regarding a CDC study that showed black children are five times more likely to get autism if they were vaccinated is simply not true.

Because that's the seriousness of what's she's doing.  People are at risk of dying because of her willful ignorance.

After much thought, stevieboy had a four point plan of action.

1. Ban unvaccinated children from public and private schools except for those who have legitimate medical exemptions. No religious exceptions, no philosophical exceptions. You want your child to mingle with peers he or she must be vaccinated.

2. During outbreaks ban unvaccinated children from amusement parks, theaters, and all other public accommodations. Take your child to the zoo, bring along proof of vaccination or no admittance. No exceptions to this rule.

4. Impose hefty penalties on parents who attempt to circumvent or to flaunt the rules. How about a $10,000 fine for the first child, $25,000 for each additional child?

djoelt1 made a popular idea for a kind of market-based approach.

The way to get the rich to inoculate their kids is to make them pay a lot for what they are duped into thinking are "special vaccines" that have lower risk than what regular people get. It's the same stuff inside the hypo, of course --just better marketing.

This prompted Splint Chesthair to propose an additional ingredient list of, "antioxidants, probiotic bacteria, Arnica montana, and goddamn fairy dust if that's what it takes people to buy."

So on the assumption that John Boehner will not succeed in putting this controversy to bed, and because of the high and very personal stakes involved, what do you now believe should be done? What are the causes and fears that inspire the anti-vaccination movement, and how can these be addressed?  Do we need legal penalties and regulations, or will better education or incentives do the trick? Tell us in the comments, and let us know if we missed any great discussions!