Family reportedly "kidnapped" child to teach him about stranger danger

A child's ordeal of guns, threats and restraint 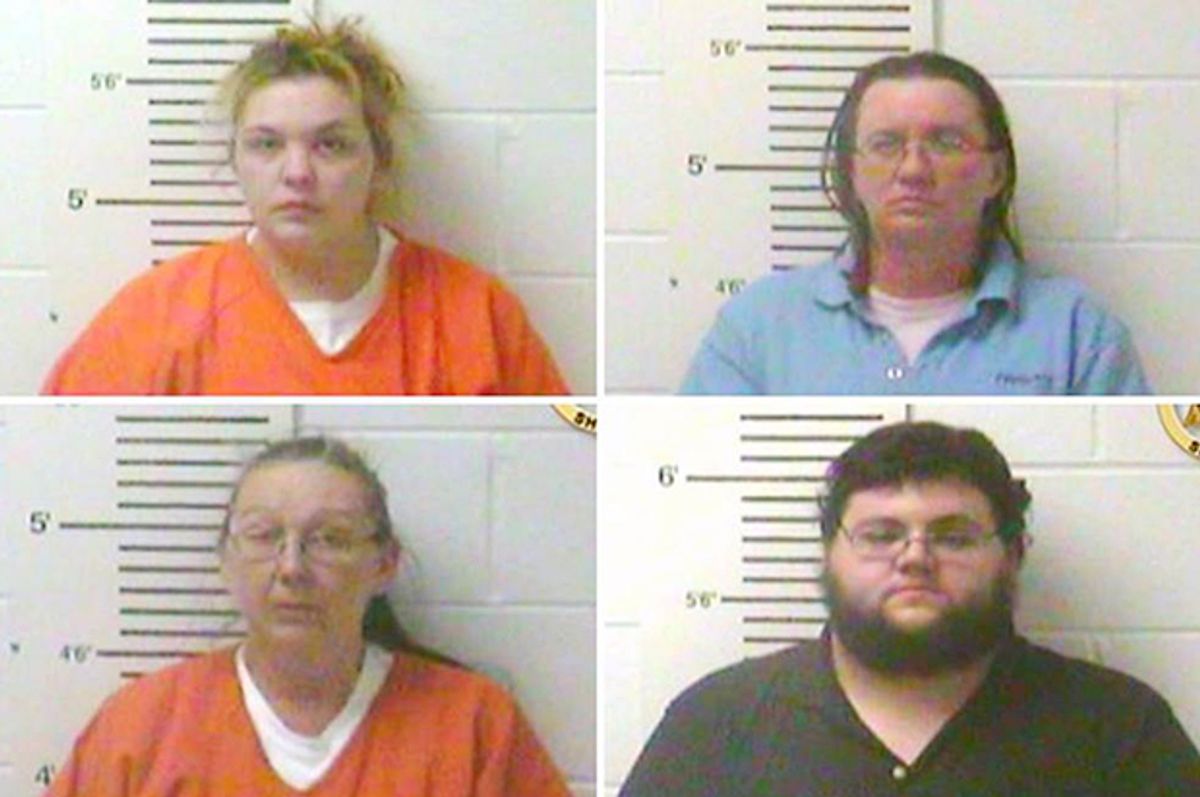 There's a six-year-old boy in Troy, Missouri, who learned a valuable lesson this week. But it wasn't, as his family intended, about so-called "stranger danger." It was that the poor little guy's family are the world's worst helicopter parents. And here's a tip for any other families concerned that a child is "too nice" – that is not a sign that you should enlist someone to abduct him to teach him a lesson.

Local news KSDK reports that four people were arrested Wednesday in a "kidnapping" that the suspects claim was designed to teach the boy, whom they feared was overly friendly, a lesson. They say that Nathan Firoved lured the boy into his pickup truck Monday while the child was walking home from school. He then allegedly told the boy he'd never "see his mommy again," and would be "nailed to the wall of a shed." He then reportedly showed him a gun and threatened him with harm if he didn't stop crying. He then "bound the boy's hands and feet, covered his face and drove him around for a while" before taking him, unbeknownst to the child, to his own home. Once there, his aunt, Denise Kroutil, removed his pants and told him he'd be sold into sex slavery. A statement from the sheriff's office says that Kroutil became "upset" when he didn't resist. It goes on to say, "The victim remained in the basement for some time before he was unbound and told to go upstairs, where the victim's family lectured him about Stranger Danger." The suspects reportedly kept in communication during the boy's ordeal via cell phone.

The child later told school officials what had happened, and they alerted the Division of Family Service. Firoved, Kroutil and the boy's grandmother, Rose Brewer, have now been charged with charged with felony kidnapping, felonious restraint, and felony abuse and neglect of a child. His mother, Elizabeth Hupp, has been charged with felony kidnapping and felony abuse and neglect of a child. The family, meanwhile, told authorities "Their primary intent was to educate the victim and felt they did nothing wrong." The plan reportedly came together when Kroutil enlisted Firoved, a coworker, to "scare" the child. The boy is now in protective custody.

There are a lot of very troubling questions about how this harrowing incident came to be. If the family was indeed troubled that the boy was somehow too trusting, why was he apparently walking unaccompanied? Did the family attempt any somewhat more restrained tactics for teaching the boy about healthy and reasonable caution before leaping to an abduction scenario? But more than that, who thinks that threatening a child with a gun, promising physical abuse, sexual abuse, and never seeing his mother again, is a good way to instill healthy boundaries? I mean, aside from these four clowns.

Yet one important lesson of this grim, sad story is that it's a neat example of where the true threats to child safety most often are. As many as 90% of child victims of sexual abuse know their abuser in some way, and 68% of them are abused by a family member. Child physical abuse and neglect is all but exclusive to family and caretakers. You want to protect children from harm? You want to look for signs that something isn't right? Don't worry as much about the stranger on the street. Worry about the aunt. Worry about the grandmother. Worry about the mom.