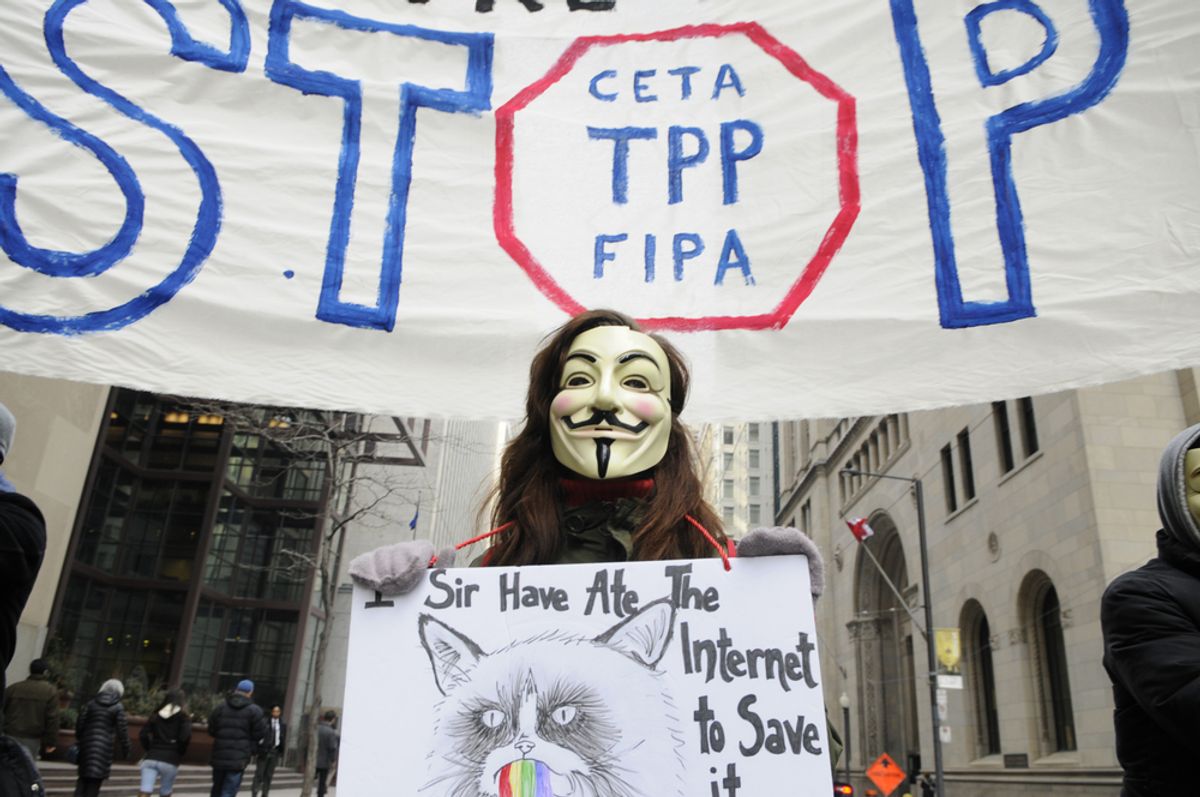 The trade rules of the proposed Trans-Pacific Partnership between the United States and 11 Asian nations would cover nearly 40 percent of the world economy -- but don't ask what they are. Access to the text of the proposed deal is highly restricted.

“We can always do better on transparency,” he said, but added that “there is no area of policy where there is closer collaboration between the executive and Congress than trade policy.”

Froman, who said his office has held more than 1,600 briefings with lawmakers over the TPP, asserted that his office also has released summaries of proposed provisions.

Yet the actual text of the agreement remains under lock and key. That represents a significant break from the Bush administration, which in 2001 published the text of a proposed multinational trade agreement with Latin American nations.

“It is incomprehensible to me that leaders of major corporate interests who stand to gain enormous financial benefits from this agreement are actively involved in the writing of the TPP, while at the same time, the elected officials of this country, representing the American people, have little or no knowledge of what’s in it,” wrote U.S. Sen. Bernie Sanders, I-Vt., in a letter to Froman last month.

Sanders’ office confirms that congressional lawmakers are permitted to view the text of the agreement only in the Trade Representative’s office, without their own staff members or experts present. They are not allowed to take copies of the agreement back to Capitol Hill for deeper, independent evaluation.

Despite those restrictions, specific details of the agreement’s text have surfaced from unauthorized leaks -- some of which appear to contradict the Obama administration’s promises.

Froman, for instance, said in Switzerland that “none of [the trade participants] want to lower our health, safety or environmental standards,” yet one of the leaks showed the U.S. proposing to empower corporations to attempt to overturn domestic regulations, while critics say another leaked provision would help the pharmaceutical industry inflate the price of medicines in poor countries.

Froman and Roberto Carvalho de Azevêdo, the director-general of the World Trade Organization, were asked at the World Economic Forum why the Obama administration is concealing the TPP from the public at the same time the European Union has just published the full text of a separate proposed trade agreement with the United States. If, as the Obama administration has argued, some confidentiality is necessary for frank negotiations, was the EU wrong to publish its full proposal?

Froman suggested that nations have varying definitions of transparency.

“It is very important that as we pursue these trade negotiations we do so in a way that takes into account input from the public, from our wide range of stakeholders, our political processes -- in our case, Congress -- we each have different ways we engage in that process,” he said.

Azevêdo said: “Honestly, this is something that the participants have to solve -- the degree of openness and the degree of transparency.” Negotiations require a degree of balance between transparency and secrecy, he said, “otherwise they don’t move."

That may be true, but the question is why? Why don’t trade deals advance when they are made public?

Perhaps because when citizens learn the details of such trade agreements, they don’t like them -- and they end up putting pressure on their leaders to back off.

Trade officials seem to think that’s a bad thing. But transparency and subsequent grassroots pressure is better than secretly negotiating a trade deal that ends up defying public will.