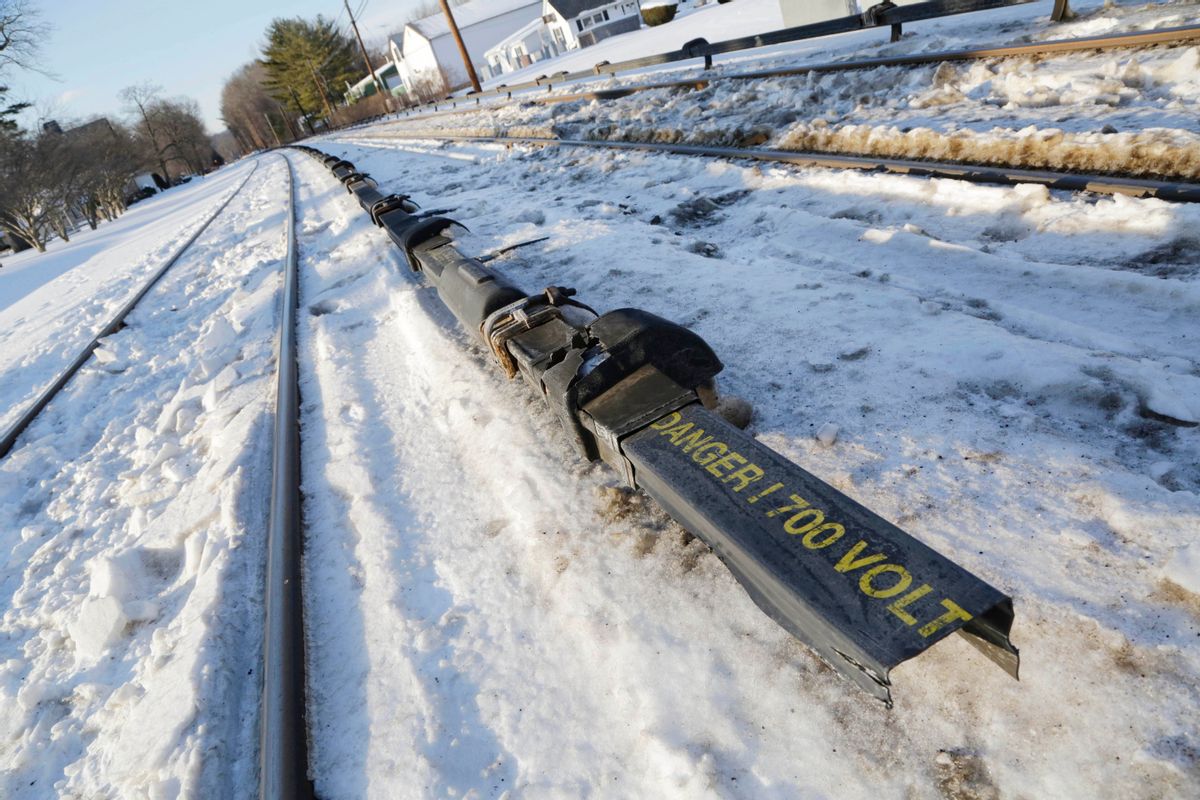 VALHALLA, N.Y. (AP) — It was a hellish scenario investigators had never seen before: 400 feet of electrified third rail snapped into 12 pieces and speared a commuter train during a fiery collision with an SUV. Now officials want to know whether the rail's unusual design explains why the crash was so deadly.

The 39-foot lengths of rail sliced through the first car of the train "like daggers going into the heart of that chamber," Sen. Richard Blumenthal, D-Conn., said Friday after getting a chilling look at the blackened, mangled wreckage.

The SUV driver and five train passengers were killed Tuesday evening in the rush-hour collision in Valhalla, about 20 miles north of New York City. The SUV had stopped on the tracks, between the lowered crossing gates, for reasons still unclear to investigators.

Metro-North, who operates in New York and Connecticut, is believed to be the only U.S. commuter railroad that uses the "under-running" or "under-riding" configuration: A metal "shoe" slips underneath the third rail rather than skimming along the top. Some have questioned whether the collision caused the shoe to pry up the third rail.

"This has never happened before, and this is a rare configuration of a third rail," said Sen. Charles Schumer, D-N.Y. "Do those two add up to the explanation for this terrible, terrible tragedy? Very possibly."

National Transportation Safety Board vice chairman Robert Sumwalt said Friday the agency aims to answer that question among many others from the crash, a rare and unusually fiery instance of passenger deaths among the thousands of train-auto collisions each year.

"We will figure out the crash dynamics as far as how that could occur," Sumwalt said.

He said the agency also is exploring when power was cut to the third rail, which is designed to be de-energized if it breaks.

As for whether anyone was killed or maimed by the 12 spears, NTSB spokesman Eric Weiss said that is not known and investigators will have to create a diagram of where people were and collect information on their injuries.

— A funeral was held Friday for the SUV driver, Ellen Brody, at a synagogue in Dobbs Ferry. Brody, 49, worked at a jewelry store and was the mother of three daughters in their teens and 20s. Rabbi Benjy Silverman called her a "beautiful soul" who "adored her daughters and husband. She was their biggest fan and supporter."

— The train engineer, whose name was not released, pulled the emergency brake four seconds before the collision, slowing the train from 58 mph to 48 mph when it hit the SUV, Sumwalt said. Then, in the smoke and flames, he carried to safety an injured passenger who couldn't walk, according to Sumwalt, who said the engineer was "very professional" during the disaster and is now "very traumatized."

— The railroad crossing had undergone a number of upgrades in recent years to reduce the risk of accidents, including the installation of brighter LED lights, "Do Not Stop on the Tracks" signs and new traffic signal control equipment.

But a 2009 plan to install a third set of flashing lights 100 to 200 feet up the road to give motorists a few seconds' extra warning was never carried out, for reasons officials were unable to explain.

Asked whether the extra lights could have prevented the tragedy, state Department of Transportation spokesman Beau Duffy said: "It's way too early to be guessing about what could have or couldn't have made a difference."

As for the third rail, a railroad expert noted that the "under-running" design has been used for decades because it's a way to avoid problems with ice building up on top of the third rail. It also reduces the possibility of inadvertent, and possibly fatal, contact with the third rail.

Steve Ditmeyer, a former Federal Railroad Administration official who teaches railway management at Michigan State University, said it is impossible to say whether the design was a factor in the fire without testing how the "over-running" system would have reacted in the same situation.

"One doesn't expect a train to push an automobile against the third rail," no matter how it's configured, he noted.

But to transportation lawyer Andrew Maloney, the third rail "is probably the most important issue in the accident." The design could have caused the shoe to act like a crowbar, said Maloney, who represents victims of a 2013 Metro-North derailment.

The Metropolitan Transportation Authority, which runs Metro-North, said millions of Metro-North passengers have traveled over the third rail over the course of many decades.

"There has never been an accident in which the underrunning third rail penetrated a rail car or, to my knowledge, prompted a train accident of any nature," spokesman Stephen Morello said.

The third rail is a common feature of subway systems. But among the nation's 28 commuter railroads, only Metro-North and the Long Island Rail Road use third rail systems, according to the American Public Transportation Association. Others use overhead wires or other forms of power.

More than 50 miles of Metro-North have the "under-running" design. The lines were built by a private railroad about a century ago, long before Metro-North's founding in 1983.

After the train hit the SUV at the crossing in Valhalla, the third rail penetrated the SUV, then pierced the floor of the train's first car, heading upward. It "kept coming in, in, in, in," breaking up into its 39-foot sections and going through the car's roof as the train hurtled 1,000 feet before coming to a stop, Schumer said.

"It's like looking into a coffin," he said of the burned-out train car. "It's one of the worst experiences I've had in elected life. ... It must have been a total nightmare."