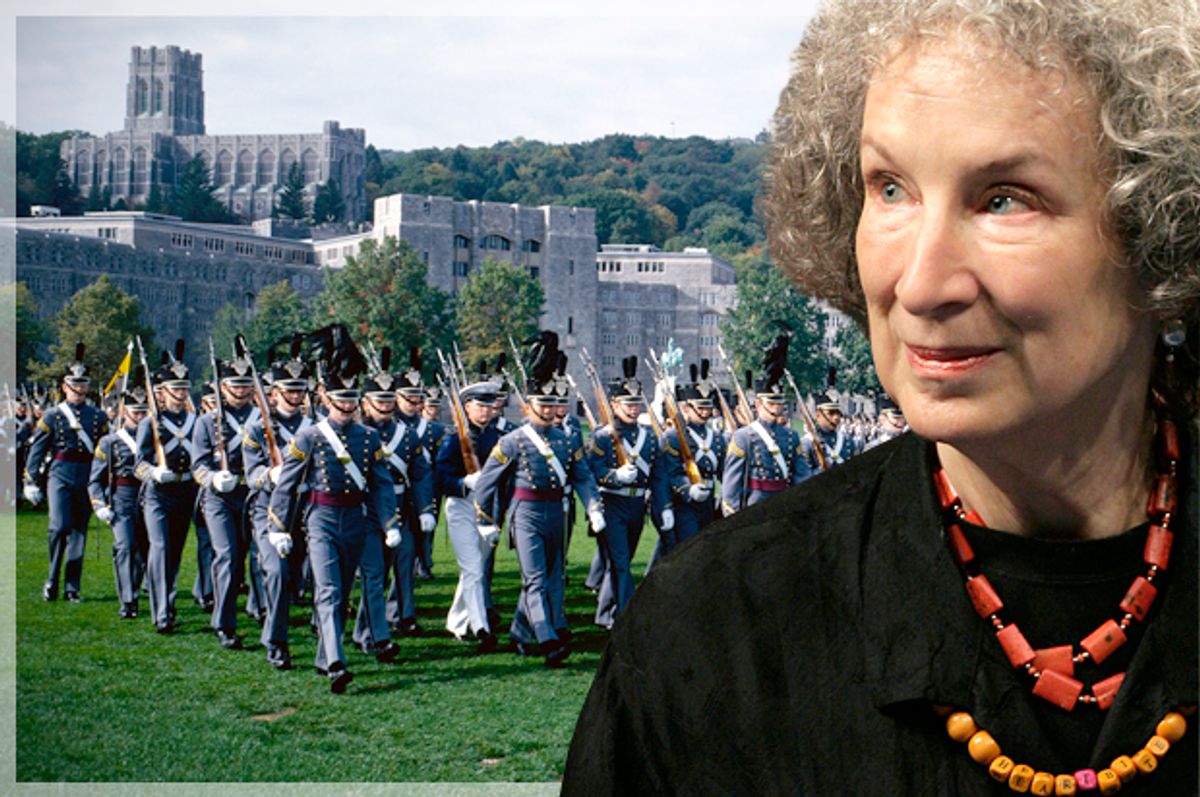 On a frosty morning last week, the author Margaret Atwood, her silver hair framed by a hood lined with violet-colored artificial fur, left her hotel in Midtown Manhattan and got into a hired town car. As the car left the city and wound through the snow-blanketed woods of the Hudson River Valley, she talked about vampire movies, praising Tomas Alfredson's "Let the Right One In," and about some of her travels: More recently, to San Diego Comic-Con, where "I had my picture taken with the Klingons," but also, when she was a young mother, to Afghanistan a few weeks before the 1978 assassination of President Mohammed Daoud Khan and to Iran eight months before the overthrow of the shah. "Don't invite me to your country," she recommended.

Atwood's destination on this trip, although unlikely enough, was probably safe from a coup. The entire first-year class of cadets at West Point had read her 1985 novel, "The Handmaid's Tale," for a literature course. The 75-year-old author agreed to speak to the assembled plebes (as first-year students at the military academy are called) after lunching with them on mac-and-cheese under the gothic arches of the campus' vast, Hogwartsian mess hall.

"The Handmaid's Tale" is set in a dystopian future not too distant from the current date. A totalitarian theocratic regime has taken over portions of the U.S., where the narrator, a young woman known only as Offred (as in "of Fred," for the man in whose household she lives) has been consigned to the status of a Handmaid. Her only role, as one of the few women whose fertility has survived decades of environmental contamination, is to provide the Commander with a child via a ritualized and joyless act of copulation. In this future, women must wear color-coded, body-concealing robes and are not allowed to hold jobs outside the home, to own property, to live on their own or even to read.

The novelist's visit to West Point commenced with a signing in the campus bookstore. Students and faculty in camo and uniforms lined up with a handful of awestruck local high school students, artsy girls in overalls or ballet flats with kitten faces on the toes. West Point's current student body is only 22 percent female, but that's an improvement on past years. To walk its halls is to enter a realm of testosterone and old-fashioned manners. A woman of a certain age (say, over 30) can expect to hear more ma'ams there in one afternoon than in a lifetime of visits to dress shops.

"Reading this book was a life-changing experience," a bright, well-scrubbed plebe enthused as he handed Atwood a worn paperback of "The Handmaid's Tale" to sign. "That's a frightening thought," she quipped in her nasal deadpan. "What were you like before?"

For many years, readers not especially familiar with Atwood's work assumed -- largely on the basis of "The Handmaid's Tale," her homage to George Orwell's "1984" -- that she and her work were, as her fellow novelist Karen Joy Fowler once put it, "Canadian, feminist and grim." The first two adjectives definitely apply, although Atwood's feminism has never been of the essentialist or idealizing variety; one of her abiding subjects is the ways women undermine each other, as well as the sustaining power of their friendships. She is the daughter of an entomologist (one of her childhood pets was a praying mantis that she trained to drink sugar water out of a spoon), and she often seems to be observing humanity with the dispassionate, unstarry eyes of a scientist.

"Grim" is the word that doesn't fit here, even if Atwood's sense of humor is consistently charcoal in hue. The advent of the Internet and social media have acquainted a much wider audience with her puckish side -- literally, in the case of the YouTube dissemination of a clip from a Canadian TV series featuring the diminutive Atwood out on the ice in full goalie gear, explaining her approach to hockey's most strategic position. ("I don't like to hot dog, but if the puck carrier is really putting lumber on it, mama can get nasty.") She's a wisecracker, albeit a dignified one, so that her manner seems equal parts duchess and film-noir dame.

Atwood currently has 640,000 followers on Twitter, where she promotes favored causes, particularly environmentalism, and has bantered flirtatiously with the comedian Rob Delaney, a fan of her work. She has communed and collaborated with young amateur writers on the site Wattpad, which has given her a Wattpad business card with the title "Fairy Godmother." She even voiced the part of herself in a fitness app called "Zombies, Run!" in which users are motivated to exercise with a zombie-apocalypse scenario. (In the app, she's holed up in the CN tower in Toronto, sending transmissions relating the undead takeover of NHL Hockey.) During the drive up to West Point, she chatted about recent articles in Fast Company magazine and her own start-up, marketer of the LongPen, a remote signing device she invented.

For the dozen or so plebes seated at Atwood's table during the institution's impressively brisk half-hour lunch period, however, she was a venerable figure, with dozens of books to her name and a Booker Prize under her belt, among other honors. She answered some familiar inquiries -- about the ambiguity of the ending of "The Handmaid's Tale" and how long it took her to write the novel ("one and half years, and a lifetime") -- but she also managed to quiz each cadet on the mascot of his or her company. "I thought they'd all be animals, but one is a firehouse," she exclaimed. One cadet carried a notebook onto which she'd laminated the image of a wolf. Atwood and the student discussed the various lamination devices currently available on the consumer market -- Atwood loves technology -- although the cadet explained that she'd just used packing tape. "Packing tape works very well, too," Atwood said approvingly.

Then it was time to move on to the Eisenhower Hall Theater, a 4,300-seat auditorium filling up with the class of 2018. Military discipline notwithstanding, college students are still college students, and as the author walked around West Point, she was continuously importuned by frazzled, book-clutching cadets who had forgotten about or missed her bookstore appearance and had rushed back to their quarters to grab their copies and get them signed. The spectacle of the diminutive author standing amid clusters of cadets and giving out autographs like a movie star attracted more than one curious stare.

While Atwood prepared to go onstage, Lt. Col. Naomi Mercer, the assistant professor and course director responsible for assigning "The Handmaid's Tale" (which was paired with the Ursula K. LeGuin story "The Ones Who Walk Away From Omelas"), talked about her choice. Mercer, an Iraq War veteran, is also the author of a forthcoming book on feminist science fiction from the 1980s, "Toward Utopia." "The Army has real gender issues, still," she said. Reading a book like "The Handmaid's Tale," "at least creates a vocabulary to talk about those issues. It was very prescient."

Atwood took the podium before over a thousand plebes, a sea of gray-shirted figures, and regaled them with tales of her own university years at Harvard, studying American literature and culture with a brilliant professor, "though you had to take his class in the morning. Why? Because in the afternoon he was quite drunk." She had been immediately struck by the repressiveness of the first Puritan colonies, where laughing and pointing in public were forbidden. "Nothing makes me more nervous than people who say, 'It can't happen here,'" she remarked. "Anything can happen anywhere, given the right circumstances." All of the actions she attributes to the government of Gilead, her future dystopia, had "already happened in a human society somewhere on the planet."

The Old Testament ideology of Gilead was what she thought would convince people to sign on to such a regime in America: "You wouldn't get very far if you said, 'I'm Bob the communist, come join my socialist tyranny!'" She likened Gilead to movements like ISIS. "They all have to have an excuse of some kind, in this case God told them to do it. It's just self-justifying." Fundamentalism seemed the most likely path to an American dictatorship. "I didn't think anyone would say, 'In order to establish our perfect liberal democracy we're going to have to remove your civil liberties.' But I'm not so sure now."

After her opening remarks, the questions posed by the cadets -- who identified themselves by name and rank before asking -- referred to everything from Islamism to Descartes, whom Atwood paraphrases at one point in "The Handmaid's Tale." Yes, if she were writing the novel now she might have borrowed some of the oppressive tactics of Muslim fundamentalists, but, 30 years on, contemporary American politics -- such as conservatives' references to "real rape" in the run-up to the 2014 elections and the bizarre belief held by Rep. Todd Akin, R-Mo., that a woman's body reflexively disables conception in the event of "legitimate rape" -- still offers ample inspiration. When those stories broke, she said, the hashtag "#handmaidstale" began to appear all over social media. The book has been filmed, made into an opera and is currently being adapted as a graphic novel.

Surprisingly, none of the questions referred to the ostensibly Christian nature of the Gilead regime. In 2012, a cadet named Blake Page resigned from West Point, complaining that the excessive religiosity of the culture at the academy "willfully disregards the Constitution of the United States of America" and fosters "open disrespect of non-religious new cadets." (Among the practices Page objected to were mandatory events that routinely included prayers.)

Perhaps most striking, given Mercer's hopes for a new vocabulary, was that all of the questioners were male, and none of them asked about the status of women in Gilead. (At least one female cadet raised her hand, but the time allotted had elapsed before her turn came.) When I suggested that readers can be highly selective about which ideas they take from a book, Atwood countered that they can be even more selective about the sort of questions they choose to ask publicly. Did she believe that readers uninterested in discussing the gendered power relations in the book will nevertheless still come away from reading it having absorbed some of her ideas on the subject? "Absolutely," Atwood replied. Mercer agreed.

As they stood in the Ike Theater's green room waiting for Atwood's car to be summoned, one last cadet popped in the door with a book to be signed. He said he'd twice read "The Handmaid's Tale" for classes. "You must know it better than I do by now," Atwood said. "I haven't gotten to the bottom of it yet, ma'am," he replied. But he did have a question. He couldn't help but notice that some of the worst treatment the novel's female characters receive comes at the hands of other women.

"That's true," Atwood said. "That's how these things work. All dictatorships try to control women, although sometimes in different ways. And one of the ways they control any group is to create a hierarchy where some members of the group have power over the others. You get those people to control their own group for you."

The car arrived, and the party stepped from the darkened theater into the blinding light of the winter afternoon, pouring down on the whitened parade grounds where, according to legend, Edgar Allan Poe managed to get himself expelled from West Point by turning up at drills wearing nothing but a cartridge belt. "That was a very good question," Atwood said of her last petitioner, and climbed in.