Williams was a late-night regular, sometimes serious, sometimes not. Now he's the joke. How will comics respond? 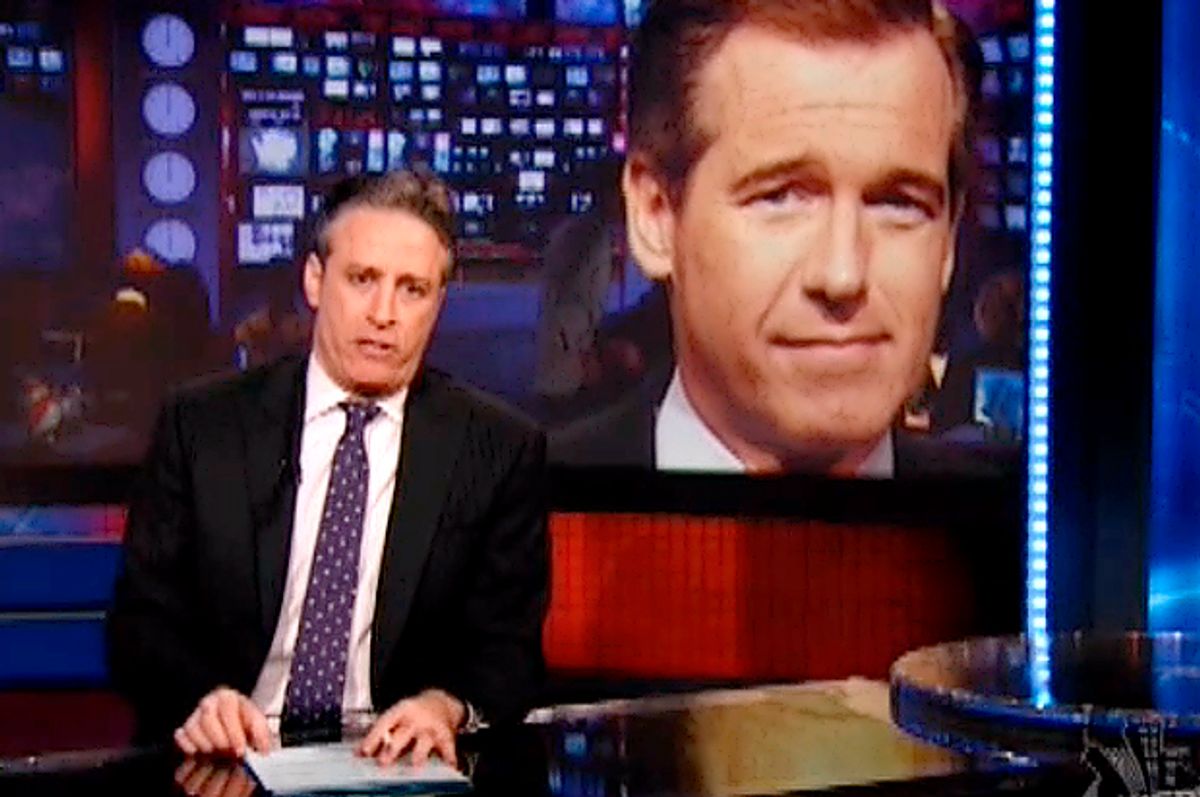 Amidst controversy over whether the depiction of Chris Kyle in “American Sniper” was accurate, we now know that NBC Nightly News anchor Brian Williams misrepresented his experience in Iraq. The revelation has called the NBC anchor’s career into question and forced him to step down – at least temporarily. In contrast to the divisive debate over whether Kyle deserves to have his career scrutinized, Williams is unlikely to enjoy any breaks. And that is because the lack of respect the American public has for the TV news media.

Of all TV news icons to fall, though, Williams is in a unique spot. Williams, perhaps more than any other TV news anchor working today, has been particularly visible in popular culture. Williams has consistently attempted to court a younger audience and cultivate a “hip” vibe by making regular appearances on late night comedy. He has been on David Letterman’s show numerous times, he appeared on “Weekend Update” on “Saturday Night Live,” and he has made appearances on Conan O’Brien’s show as well as on “30 Rock.” In each of these cases he has traded his gravitas as a news anchor for laughs and for a chance to reach a wider audience.

But now as we reflect on what the revelations of his exaggerated experiences in Iraq (and possibly elsewhere) mean for his career, it is worth wondering what we can learn about Williams’s special connection to comedy. Certainly in hindsight these stunts reveal a degree of parody and performance that are much less funny in light of his diminished integrity.

One of the best examples of this heightened parody is his repeated appearances on “Late Night with Jimmy Fallon.” A few months after Fallon stepped in as host in 2014, his staff created a mash-up of Williams where he appeared to rap to hip-hop. The show made a few of these mash up videos and they repeatedly went viral. But even funnier-- and even weirder in light of recent events -- are the “slow jams” Williams did with Fallon, where he read news to music and Fallon sang and made puns. The slow jam with Fallon was funny because it was a parody of Williams as a serious reporter. Now that we know the truth -- that Williams was less serious and more egotistical -- the slow jams seem more like examples of shameless self-promotion.

It is important to point out, though, that this story is about more than the inflated ego of one nightly news anchor. Instead, the decline of Williams needs to be read as part of the ongoing blurring of entertainment and news. TV news has long been in decline as a trusted source of information to the public. Numerous studies show that network news is decreasing as a source of information for the U.S. public, especially among younger viewers. Williams, who won a Peabody for his reporting on Katrina (reporting that is now also being called into question) may have been one of the most visible TV news journalists, but his presence as a public figure was nothing in comparison to TV anchor predecessors like Walter Cronkite and Dan Rather.

In 2014, Pew Research conducted a poll that revealed that just 27 percent of the public could correctly identify Williams, and only 3 percent knew he was anchor of the top-rated NBC Nightly News. In comparison, a 1985 poll showed that 47 percent of those polled could recognize Dan Rather. The 2014 poll also showed that only 15 percent of those 18-29 could identify Williams. Perhaps they recognized him from Fallon’s raps and slow jams and didn’t know he was also a news anchor.

Scholars of television news explain that a number of media developments have worked to reduce the accuracy, significance, and impact of TV news. Geoffrey Baym teaches us that when TV news moved to the 24/7 cycle of cable it increasingly moved to “entertain” viewers. And Jeffrey Jones explains that as these transitions took place, traditional news lost viewer faith as a trusted source of information.

Meanwhile on the other side of the entertainment spectrum, satire news has grown in public appreciation and in its ability to inform its audience. Viewers of “The Daily Show” have been proven to have greater knowledge of current issues than the viewers of NBC’s Nightly News. And in 2007 Stewart tied Williams for the No. 4 most admired journalist. But it’s not just that viewers of satire are more informed; they actually trust Stewart more. After Walter Cronkite died, Time magazine conducted a poll that showed that Stewart was the most trusted newsman in America. The point is that well before Williams fell from grace, his brand of “straight” news was already losing credibility to satire.

As we acknowledge the increasing significance of satire news over traditional news it is worth recalling the times that Williams appeared on “The Daily Show.” Williams would clearly be considered a “friend of the show” given the fact that he visited fairly regularly. Prior to the recent revelations, we might have read these appearances as an effort by Williams to reach younger viewers, to challenge the satire of Stewart with his own gravitas, and to suggest that serious news still has a major public role to play. But now the tables are turned and, if anything, it is Stewart that emerges as the serious newsman and Williams that looks like a joke.

Williams made a habit when he appeared on comedy shows like Fallon’s or Stewart’s of mocking the comedians and reminding viewers that he did “real” news. One of the best examples of this took place when Williams appeared on “The Daily Show” after Cronkite died in 2009. Right after the interview began, Stewart announced that the conversation was going to focus on the topic of “integrity.” He explained that he wanted Williams to talk about journalism integrity: “You need to defend your industry from parasites like myself.” He then went after a news item that suggested that NBC may have been unethical in efforts to interview South Carolina governor Mark Sanford. But Williams bristled at the line of questioning, aggressively suggesting that Stewart didn’t understand news: “Those of us in the real news business have pressures you don’t know about.”

The exchange got even tenser as Williams chastised Stewart and told him that he was in the business of “big boy TV.” He then mocked Stewart saying “our newsroom has people working in it.” As they moved to discuss Cronkite as an icon for Williams, the newsman explained that he had always wanted to be like his idol. Stewart laughingly retorted, “How does it feel to fall so short?” Only to then smile and say, “This is big boy comedy.”

Watching these exchanges today the playful banter becomes disturbing. Williams’ repeated posturing seems pathetic. And his constant need to underscore his credibility seems sad. We watch Williams mock Stewart; but now he just seems to be mocking himself.

As we watch the events unfold, the real question will be whether Stewart will come after Williams or whether he will soft glove Williams’s deceit. While we can be sure that he is not likely to sing a Fallon-like duet, it will be interesting to watch how Stewart plays this news. Will he reveal to us that we can still count on satire to expose fraud? Or will he back off? We are far more likely to be upset if Stewart lets Williams off the hook than we will be if NBC does. In the end the Williams scandal may be more of a test for satire than it is for news media.