Bruce Rauner's war on labor: A look at the Illinois governor's pernicious "reforms" 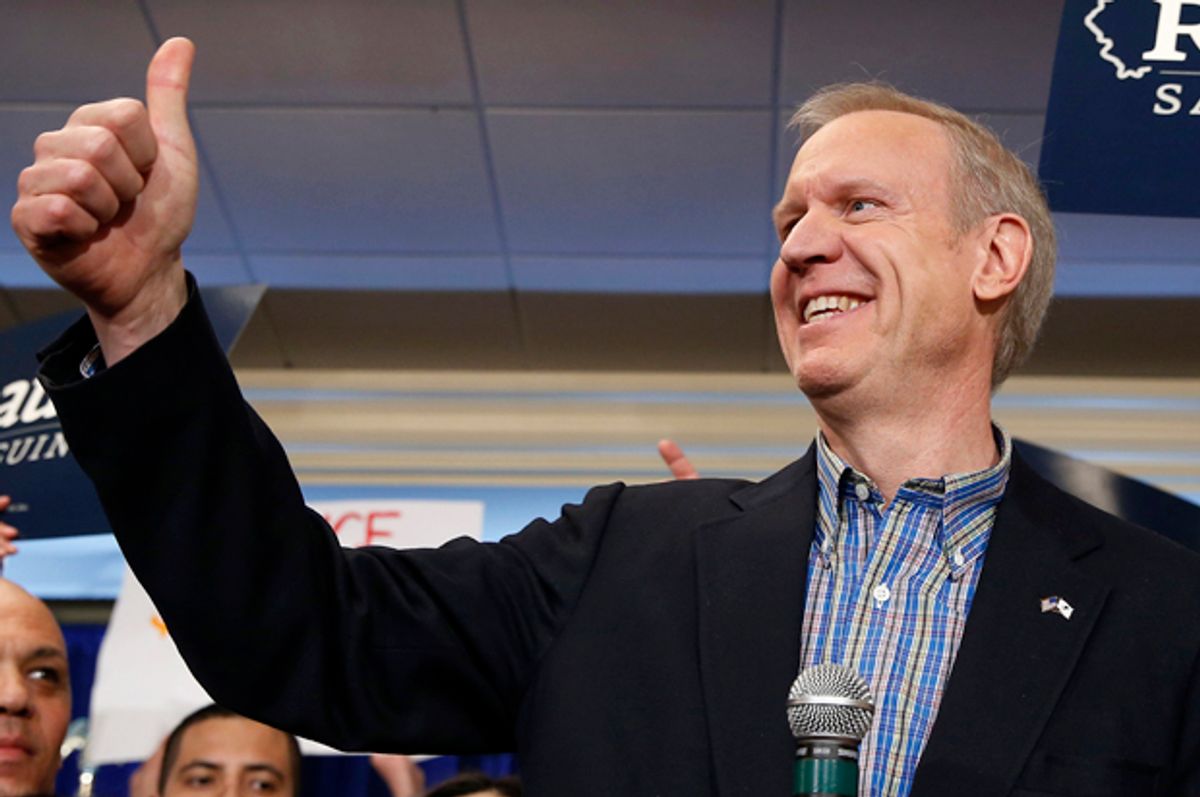 Republican Illinois Gov. Bruce Rauner dramatically escalated his war against labor unions on Monday, issuing an executive order that allows public employees to opt out of paying "fair share" fees that support collective bargaining. The move threatens to further erode the power of the labor movement, which has been particularly embattled in its former Midwestern strongholds.

Rauner, a billionaire former private equity executive who ousted Democratic Gov. Pat Quinn in November, is pitching his executive order as a strike against coercion and corruption.

“Forced union dues are a critical cog in the corrupt bargain that is crushing taxpayers. Government union bargaining and government union political activity are inexorably linked,” Rauner said Monday. “An employee who is forced to pay unfair share dues is being forced to fund political activity with which they disagree. That is a clear violation of First Amendment rights — and something that, as governor, I am duty-bound to correct.”

Rauner's administration calculates that of 46,573 state workers covered by collective bargaining, 6,580 are not union members; they pay, on average, $577 in yearly fees.

Seeking to pre-empt a legal challenge to his order, Rauner retained former U.S. Attorney Dan Webb of the white-shoe law firm Winston & Strawn to ask for a declaratory judgment in federal court that the fair share provisions are unconstitutional. The Supreme Court ruled last year that workers who are not "full-fledged public employees" can't be forced to pay union fees; Rauner contends that the court's decision supports his position.

In 1977, however, the Court affirmed mandatory fees, ruling that they were constitutional as long as they weren't used to fund political activity, including lobbying and candidate contributions. Accordingly, public employee unions in Illinois do not use fair share fees to support political endeavors, despite Rauner's suggestions to the contrary. A spokesman for AFSCME, the largest public employee union in the state, told the Chicago Sun-Times that AFSCME  does “not include any fees for contributions related to the election or support of any candidate for political office.”

Under proposals Rauner unveiled last week, AFSCME and other public employee unions wouldn't be able to make campaign contributions at all. In addition to a ban on union campaign contributions, Rauner also endorsed the creation of so-called "empowerment zones," in which workers would be allowed to opt out of paying union fees even if they benefit from union-negotiated contracts. Along with Rauner's executive order, the empowerment zones, if enacted, would move Illinois closer to becoming a right-to-work state; an statewide right-to-work bill allowing workers to opt out of union membership or fees would almost certainly be dead on arrival in the Democratic legislature.

With Rauner at the helm, Illinois joins other Midwestern states that have been battlegrounds in fights over workers' rights and union power in recent years. Wisconsin Gov. Scott Walker sounded a dramatic salvo in 2011 with his ultimately successful push to strip most public employees of collective bargaining rights. Ohio Gov. John Kasich signed a similar bill, although it was overturned by voters in a November 2011 referendum. The following year, Michigan Gov. Rick Snyder signed legislation making his state -- once the backbone of the auto industry, powered by a vibrant labor movement -- a right-to-work state.

Rauner's anti-union campaign also occurs amid a grim national context for the labor movement. In 2014, the nationwide unionization rate dipped to 11.1 percent, from 11.3 percent in 2013. At midcentury, the rate stood at nearly 35 percent.

At 15.1 percent, Illinois' unionization rate still outpaces the national average, and public employee unions show no sign that they're willing to acquiesce to dispiriting nationwide trends.

“Bruce Rauner’s scheme to strip the rights of state workers and weaken their unions by executive order is a blatantly illegal abuse of power,” AFSCME Council 31 Executive Director Roberta Lynch told the Sun-Times in a statement yesterday. “Perhaps as a private equity CEO, Rauner was accustomed to ignoring legal and ethical standards, but Illinois is still a democracy and its laws have meaning."