In big new interview with Vox, the President said some encouraging things. But here's where he wouldn't come clean 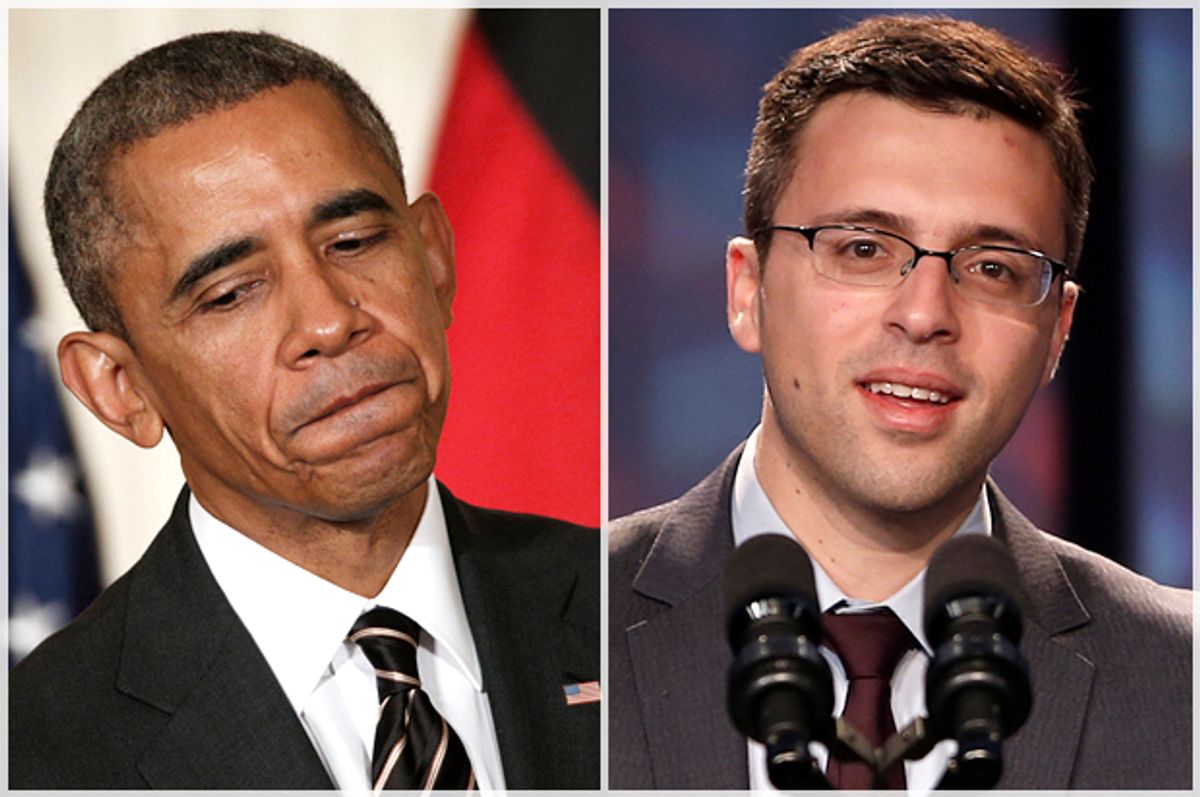 President Obama’s informative interview with Vox.com included a number of revealing moments where the leader of the Democratic Party aligned himself with its more progressive wing. Whether it was the depiction of a humble foreign policy where “we don't have the option of simply invading every country where disorder breaks out,” support for an overhaul of executive compensation practices, a call to eliminate the Senate filibuster, or an endorsement of all-payer rate setting (where public and private health insurers pay a set price for every medical service), the President took stands that would not differ much from members of the Congressional Progressive Caucus.

However, with Republicans in Congress for the rest of Obama’s term in office, what matters more for the immediate future is where he differs with his party, and agrees with the other side. And the Vox interview section on foreign policy touched on that with a discussion of the Trans-Pacific Partnership (TPP), a so-called “free trade” deal with eleven countries on both sides of the Pacific rim.

I say “free trade” with scare quotes because the deal has less to do with trade than with setting a global regulatory ceiling for multinational corporations to follow, in the name of “harmonizing” commerce across countries. The TPP will limit government policies on everything from financial services to the environment to food safety, and give corporations an alternate judicial system, known as “investor-state dispute settlement,” to seek monetary awards if countries constrain their “expected future profits” by imposing regulations above the agreement caps.

So what does Obama say to a wonkish center-left outlet when asked about this? Well, for one thing he doesn’t dare mention the regulatory implications, which always get weirdly pushed to the side in the TPP discussion despite their prominence. And he starts in the way of all conciliators by acknowledging the grievances of the other side.

“There are a lot of people who look at the last 20 years and say, why would we want another trade deal that hasn’t been good for American workers,” Obama says to Matthew Yglesias. And he does not deny this reality, saying that a prime goal of the TPP is to effectively nullify the older deals. “Right now it’s not fair, and if you want to improve it,” Obama says, “that means we need a new trading regime.”

This is a strange position coming from a President who has actively supported these older-style deals. In 2011, he signed corporate-written free trade deals with South Korea, Colombia, and Panama, precisely what he calls “not fair” in the Vox interview. Indeed, since the South Korea Free Trade Agreement was put into place, the bilateral trade deficit has gone up 50 percent. Small business exports to Korea have declined 14 percent since the agreement took force, and manufacturing exports have also fallen. So arguing that we need a new trading regime to fix the old trading regime that Obama presided over as President shouldn’t inspire much confidence. (Maybe the new trading regime should be to not sign a free trade agreement, since U.S. exports to non-FTA partners have grown over 30 percent more per capita than to FTA partners).

Then, Obama reiterated his argument stoking fears of Chinese dominance in Asia. “If we don’t write the rules out there, China’s going to write the rules,” Obama said. But as Zach Carter and Dana Liebelson point out, this only makes sense if decent labor standards can be brought to signatories like Vietnam, a key offshoring site for China. And the Vietnamese have been reportedly fighting the labor portions of the deal.

Moreover, the United States frequently doesn’t enforce the labor terms of its free trade agreements. In November, the Government Accountability Office looked at recent free trade agreements in Central and South America – including one signed by President Obama with Colombia – and found weaknesses in the monitoring and oversight. In fact, violence against trade unionists continues to exist in Colombia, years after the President vowed that an action plan embedded in their free trade agreement would put a stop to it. As of last April, seventy-three trade unionists have been murdered since the plan went into effect.

President Obama conceded that TPP won’t live up to even a minimal labor goal when he made the rhetorical statement that organized labor wants union recognition in Vietnam or open markets in Japan, replying, “well, I can’t get that for you.” (indeed, the U.S. just dropped their effort to require Japan to open their auto markets in the deal, something that has led to the displacement of over 800,000 jobs). He says that the best possibility is to make something somewhat better than the status quo. But Obama is a terrible messenger for this message, having spent six years presiding over and passing trade agreements that fit neatly into that status quo, and of course remaining mute on the real goals of TPP: expanding corporate power over sovereign countries. And an incremental improvement won’t alter the balance of power between the U.S. and China, which Obama says is his overall goal.

But the most amazing part of Obama’s pitch on new trade deals is this statement: “Those experiences that arose over the last 20 years are not easily forgotten, and the burden of proof is on us, then, to be very transparent and explicit in terms of what we're trying to accomplish.”

Maybe Obama didn’t realize he was talking about one of the most secretive major policy deals in recent history. Most of what we know about the TPP has come from leaked texts, with periodic bombshells like the impact on copyrights, prescription drug access and even financial regulation. The public has no access to the text, and members of Congress can only view it in the U.S. Trade Representative’s office, without staff members or experts, and without taking copies with them. The European Union recently published the entire text of a proposed U.S.-Eurozone trade agreement under negotiation, but the U.S. hasn’t come close to this level of transparency.

You’d think that, before Obama would say that his Administration must be transparent to the public in describing the benefits of free trade, he would at least share even a few lines of the text with the public. The TPP has been marked only by secrecy.

So the Administration case for the TPP is incredibly weak, based on “trust-us” arguments from those who haven’t earned that trust, who won’t discuss the real issues and who argue for transparency while hiding the true agenda. But the combination of a media that generally depicts anything with the word “trade” in it as a universal good, and a Republican Party hungry to reward their corporate funders, means that Obama’s arguments don’t have to be good to be successful.