Even before "misremembering," years of self-parody promoting the network diluted the anchor's credibility 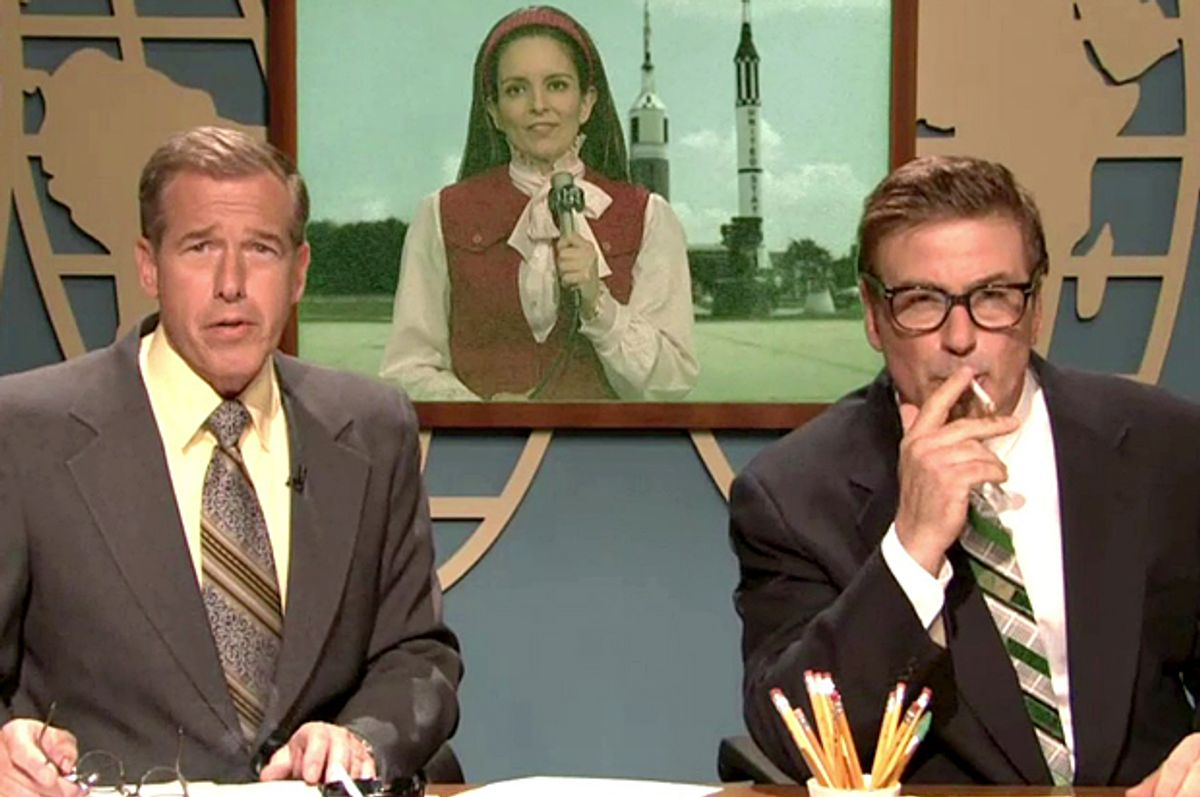 In 2011, actress and comedian Mindy Kaling—then a breakout NBC star from the “The Office”—remarked on Twitter, in a joke that sounds awkwardly foreboding now, given the events of the last week: “At this point there must be some teenagers who think Brian Williams is a sketch comedy actor who has a really dry nightly parody news show.”

It’s unclear exactly what Kaling was responding to—probably the fifth season of “30 Rock,” which ran from January to May of that year, and featured “NBC Nightly News” anchor Williams in three episodes (“¡Que Sorpresa!” and “100,” parts one and two). But it could have been other moments, too: By 2011, Williams was a frequent host on “Late Night With Jimmy Fallon,” slow-jamming the news on a variety of topics, a giant head on “The Daily Show With Jon Stewart,” and an occasional guest star on “Saturday Night Live,” too. In almost all of his appearances, Williams played a game, competent, hilarious version of himself: In “30 Rock,” he adopts a more than proficient New Jersey accent; in “Saturday Night Live,” he plays an entirely convincing newsman from 1970. Ever since becoming “NBC Nightly News” lead anchor and managing editor, in 2003, Williams has played up his anchor-face both for his work—which is award-winning—and for occasional but well-earned laughs.

And then Williams embellished a war story from 2003 and repeated it on-air on Feb. 2; this has varying importance, depending on whom you ask. Williams has stepped away from his role for an indeterminate amount of time while NBC News conducts an internal investigation into Williams’ trustworthiness (which, as columns at Time and the New York Times observe, will be a case of an employee investigating the boss, which is not exactly objective). This means that over the course of the last few days, Williams’ forays into the land of make-believe have become the butt of the joke, instead of the joke itself. Conan O’Brien and Larry Wilmore made cracks about Williams’ fabrications in the opening monologues to their shows Monday night; Jon Stewart devoted a lengthy and more even-handed segment to the story (Williams is, reportedly, a friend).

Regardless of whether Williams’ “misremembering” merits termination, though, this is really not about him, or about journalistic ethics, as much of the media is making it out to be. The story is instead about what Stewart charmingly calls “infotainment confusion syndrome,” which occurs when “the celebrity cortex gets its wires crossed with the medulla anchordala.” As David Carr points out in the Times, being a news anchor requires a public persona that is a nearly impossible combination of traits: “We want our anchors to be everywhere, to be impossibly famous, globe-trotting, hilarious, down-to-earth, and above all, trustworthy. It’s a job description that no one can match.” Williams undoubtedly had a hand in undermining that peerless image, whether that was through fabricating this story or delivering a line or two from Sir Mix-A-Lot’s “Baby Got Back” with Jimmy Fallon on "The Tonight Show.”

But it is impossible to view this story without viewing the deliberate line-blurring that is NBC’s cross-promotional marketing—marketing that has placed Williams front-and-center in a branding strategy that appears to have now quite publicly backfired. Williams, once he ascended to the anchor’s chair, became a flagship brand—one that NBC could use to promote, revitalize or reinforce other branded content, whether that was scripted work like “30 Rock” or late-night comedy like “The Tonight Show” and “Saturday Night Live.” Jimmy Fallon uses Brian Williams as a bastion of reason to slow-jam with; Williams uses Fallon as an injection of instant cool. NBC uses both to tie the shows and the franchises to each other. “The Tonight Show,” “SNL” and “NBC Nightly News” are franchises that have defined the network’s success for decades; NBC follows through by attempting to yoke them all together in viewers’ minds. And “30 Rock,” in its seven seasons, was a show that simultaneously mocked NBC’s structure and wrote the mythos around it—how many other addresses of news networks can you name?

Every network tries to cross-promote—characters on ABC’s “Nashville” will only entertain interviews from ABC shows like “Good Morning America,” for example—but NBC is the best at it. That peacock is ubiquitous; those three-tone chimes are immediately recognizable. And the “Brotherhood of Man” promo I mentioned earlier offers a dys- or utopia—depending on how you feel about it—that offers a comprehensive world of programming—comedies, procedurals, musicals, late-night comedy, news and, of course, the Super Bowl. The combined cast of seemingly every show under NBC’s banner joins together—including, prominently, Mindy Kaling—and changes the last words to “aren’t you proud to be / right here on NBC / in this great brotherhood of man?” Not for nothing is this both the oldest and the No. 1 network in America.

Williams has, of course, been a celebrity guest on other networks’ shows—his 2013 appearance on “The Late Show With David Letterman,” a CBS property, is at the center of this kerfuffle. If anything, though, his casual remarks as a guest to David Letterman seem less significant than cameos on his employer’s other shows. The former is a hobby; the latter is work. If NBC wants its anchors to be comedians and performers on top of being responsible, trustworthy deliverers of the news, then perhaps they should reconsider what they demand of their newsreaders. There’s a reason that “SNL’s" “Weekend Update” is not “NBC Nightly News.” And there’s a reason, too, why the actress daughters of news anchors perhaps shouldn’t be eligible for the lead in a live musical on that same network. Brian Williams is an incredible brand—he’s easily the most recognizable network news anchor in America—and it seems to me that in their eagerness to cross-promote, NBC ended up irrevocably diluting his credibility.

Ultimately, I am not sure what needs to happen for “NBC Nightly News” to regain its footing. As frustrating as the specter of “infotainment” is, I have to be honest: Brian Williams is funny on “Saturday Night Live,” he’s hilarious in “30 Rock,” and look, I’ve seen that “Brotherhood of Man” promo at least a dozen times—today. But news and entertainment have always mixed uncomfortably—and NBC is getting in the way of its own success by focusing on what is little more than self-congratulatory branding.