That a comedian became the most trusted man in America says something dangerous about our system. That must change 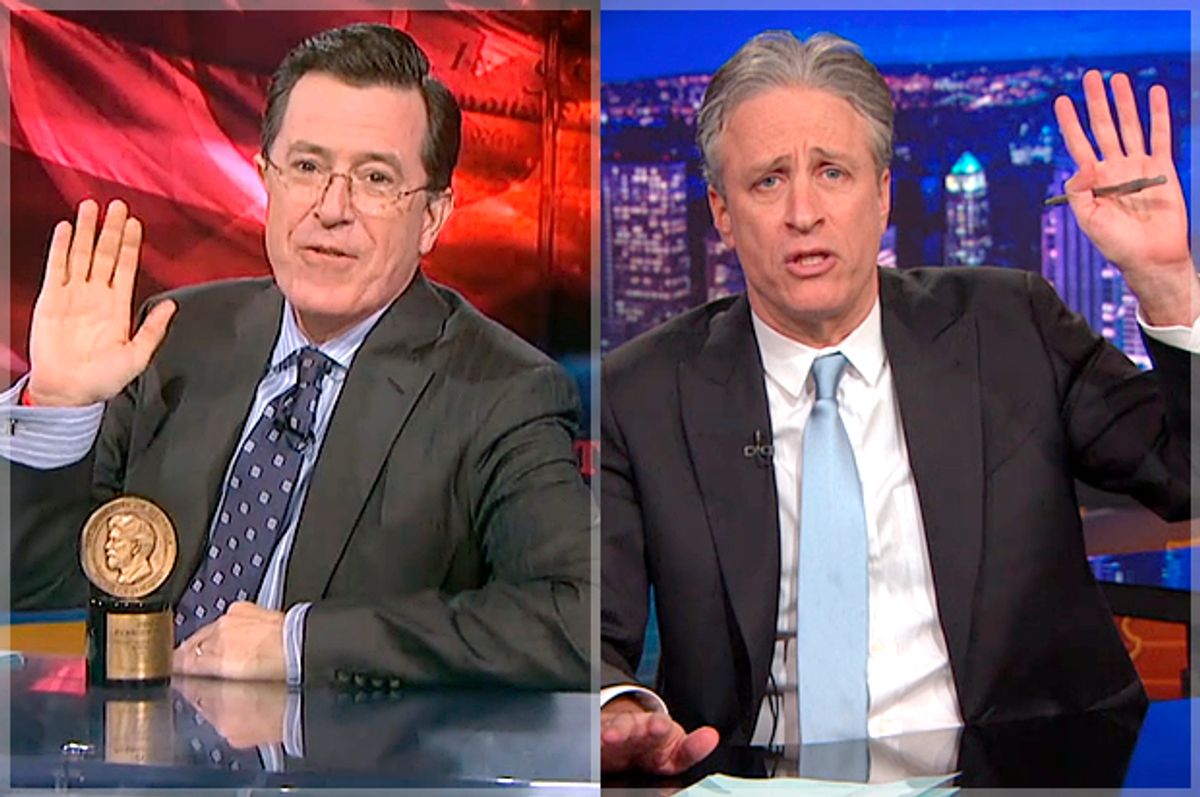 Now that Jon Stewart has announced he’ll be leaving "The Daily Show" sometime this year, we can expect a steady diet of eulogies for, oh, the next 11 months. In essence, the nation (or at least a nation of pundits) will sit Shiva for him.

These pieces will commemorate the comedian as a secular prophet who used humor to expose the perpetual corruptions of our civic institutions.

Stewart deserves every bit of praise he’ll receive. His central innovation as a cultural critic has been to apply a standard of basic decency to our depraved media and political classes. He and his brilliant staff provided a lot of comic relief to a lot of distressed citizens.

But these mash notes won’t answer the larger question, which is what Jon Stewart meant. How is it that the host of a fake news show became both “the most trusted man in America," and the most revered figure in our popular culture?

Of course, Stewart is hardly the first humorist to claim that mantle. Mark Twain had us howling at poisonous truths 150 years ago, and Will Rogers was probably better loved than any president he mocked.

But Stewart’s meteoric rise clearly reflects America’s escalating anxieties: our pervasive cynicism about institutions of power, the corrosive excesses of capitalism, and, above all, our regression from citizens capable of enacting reform to passive consumers who regard civic decay as a source of entertainment.

In other words, his influence says a lot more about us than it does about him.

Consider the Rally to Restore Sanity and/or Fear, which Stewart and his evil twin, Stephen Colbert, held four days before the 2010 mid-term elections. More than 200,000 people swarmed the National Mall and millions more tuned in, hoping to witness a watershed event. What they got was a variety show. Stewart’s closing statement was anodyne to the point of anti-activism. “If you want to know why I’m here and what I want from you,” he announced, “I can only assure you this: you have already given it to me. Your presence was what I wanted.”

Many progressives felt deeply betrayed, as if the hosts were actually to blame for the results of the subsequent election, in which Tea Party candidates stormed the House of Representatives. If only Stewart had roused voters, we wouldn’t be facing perpetual gridlock, gerrymandering of congressional districts, and so on.

But Stewart has always been forthright about his motives, which are therapeutic. His job is to lacerate famous hypocrites and thereby divert rage into laughter. In an interview with Rachel Maddow, Stewart described his approach this way: “It’s idealistic but it’s impotent.”

The description might be applied just as accurately to those of us (guilty as charged!) who honestly expected a televised comedian to vanquish a sustained, lavishly funded, and highly coordinated electoral effort.

For years, our desperation to endow Stewart with messianic powers has led us to indulge in this sort of magical thinking. No matter how hard I try not to delude myself, some part of me honestly believes that watching Stewart make mincemeat out of Tucker Carlson or Jim Cramer or the Koch Brothers constitutes political action rather than passive consumption.

The evidence of my delusion is abundant: our free press remains devoted to for-profit stimulation. The bubble of free-market evangelism continues to inflate. Corporations go right on amassing political power.

With a few notable exceptions, the only thing Stewart changes most nights is my mood.

Which is his job. After all, the very purpose of comedy, as a bio-evolutionary adaptation, is to alleviate distress. As Stewart once explained, “It’s a wonderful feeling to have this toxin in your body in the morning, that little cup of sadness, and feel by 7 or 7:30 that night, you’ve released it in sweat equity and can move on to the next day.” A Marxist would have a hard time resisting the notion that comedy, and "The Daily Show" in particular, has become the chosen opiate of the Left.

The cultural critic Neil Postman traces this mindset even further back, to the dawn of our mass media, in which telegraphs first gave Americans access to “news” events we could talk about, but that could not lead to meaningful action. (Anticipating Stewart, he referred to this paradigm as a “great loop of impotence.”)

Postman, as it turns out, was the one cultural critic who saw the rise of comic moralists, and the paradoxical limits of their power, coming three decades ago.

In his 1985 book "Amusing Ourselves to Death," he warned that our growing dependence on television had created a society whose standard of value was “whether or not something can grab and then hold the public’s attention. It is a society in which those things that do not conform—for example, serious literature, serious political debate, serious ideas, serious anything—are more likely to be compromised or marginalized than ever before.” In such a world, morality becomes yet another form of entertainment.

Postman predicted the eventual appearance of parodic programs such as "The Daily Show" that would illustrate “how television recreates and degrades our conceptions of news, political debate, religious thought, etc … The parodists would become celebrities, would star in movies, and would end up making television commercials.”

“To whom do we complain,” Postman demanded, “and when, and in what tone of voice, when serious discourse dissolves into giggles? What is the antidote to a culture’s being drained by laughter?”

This is the question we should be asking as Jon Stewart prepares to take his months-long victory lap. Is it possible that losing two comic giants, first Colbert and now Stewart, might actually be good for America? That the time has come for us to confront the decay of our civic institutions and the vacuum of leadership in our democratic systems—without pacifying punch lines?

After all, in the past our collective agitation led to moral progress. Abolitionists helped stoke a war against the slave states. The Crash of 1929 brought us the egalitarian policies of the New Deal. Citizen activism brought us the Civil Rights Act and an end to the Vietnam War. The iniquities of Watergate led to campaign finance reform.

Today, a clear majority of our citizens—of every ideological persuasion—share the same haunting suspicion: that we are somehow powerless to fix our broken systems, and adrift in a fog of frantic material distraction that has led us astray from lives of deeper civic engagement.

For some, religion remains the fount of salvation. Others place their trust in the bluster of conservative demagogues, whose lucrative ravings frame our crises as the result of liberal enlightenment run amok.

For those of us who loyally watched Stewart over the past 15 years, perhaps the time has come for us to feel the anguish he and his staff dependably converted into laughter. How else might we begin to confront the very real existential threats to our country and planet?

There’s no doubt that life without Jon Stewart won’t be as much fun. It’s inconvenient and frightening to confront the true nature of our predicaments without some form of comic relief.