This Kafkaesque saga of an endless divorce trial, starring the amazing Ronit Elkabetz, is an Israeli sensation 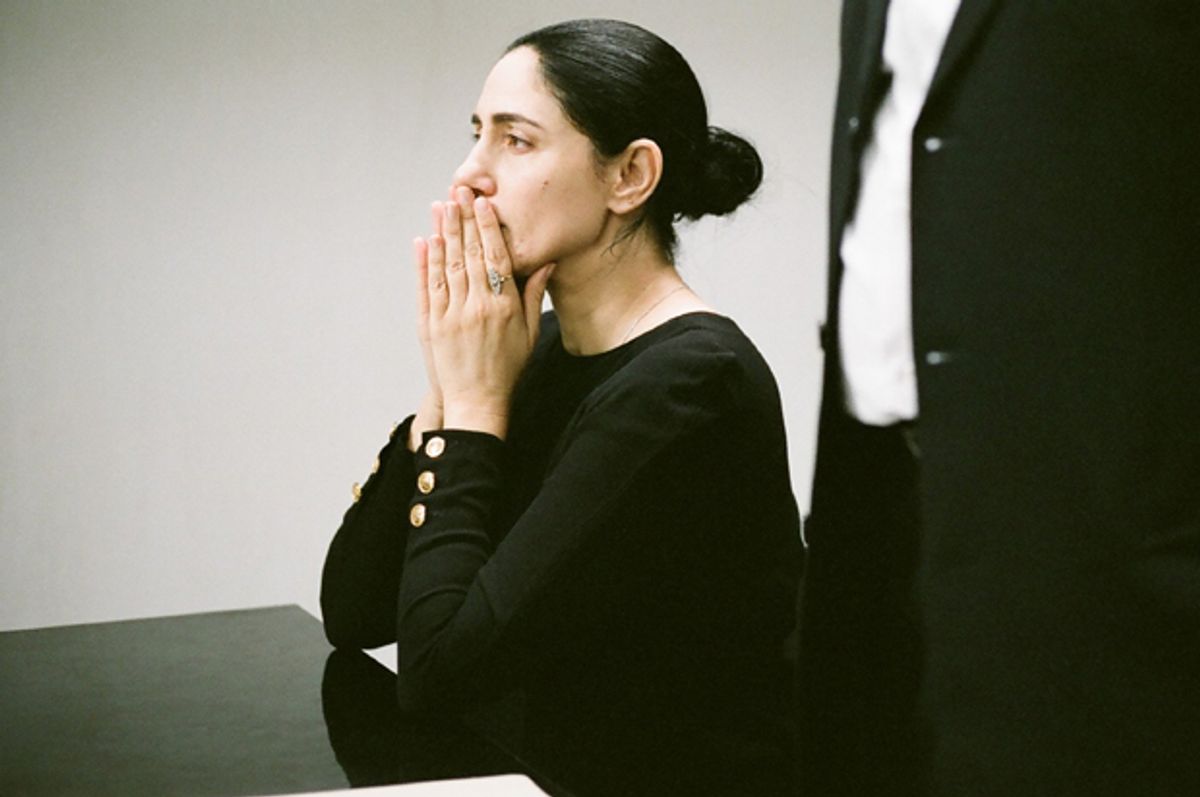 No doubt a certain amount of background is helpful when approaching “Gett: The Trial of Viviane Amsalem,” the absurd, tragic and altogether extraordinary courtroom drama from the Israeli brother-sister directing team of Ronit and Shlomi Elkabetz. But let me stop right there and say: Helpful, but not necessary. With her dark eyes, husky voice and formidable profile, Ronit Elkabetz is one of Israel’s best-known actresses, and this film demonstrates why. Her smoldering screen charisma as a frustrated and oppressed woman who has suffered through 30 years of loveless marriage, and is now confronted with the ludicrous Talmudic meandering of a male-dominated religious institution, requires no translation or explanation. While the theatrical claustrophobia of “Gett” – which never leaves its spartan, constricted courtroom setting – certainly demands some audience adjustment, it also focuses our attention on Viviane's Sophoclean combination of agony and rage.

Indeed, we could also go deep background on “Gett” before getting to its Israeli specifics. This movie is a feminist critique of one nation’s antiquated institutions, but it’s also a tragicomic study of the self-congratulatory and paradoxical nature of bureaucracy. Too many things get called “Kafkaesque,” no doubt because the great Czech-born writer saw the absurdity and cruelty behind the supposedly beneficial institutions that dominate modern existence before the rest of us did. But this movie genuinely earns the label: Its protagonist is punished simply for existing, or at least for her insistence on pursuing an individual destiny. She is dragged through an interminable legal process that nourishes itself on delay and reversal and circumlocution, and that is constantly (and sometimes hilariously) derailed into smug theological discourse or private melodrama. None of that is unique to Israel or Judaism, to be sure, but it’s worth noting that Kafka was Jewish, and his work was informed by both the rabbinical cast of mind and the tortuous byways of the Austro-Hungarian legal system.

“Gett” is actually the third film in a trilogy made by the Elkabetz siblings about the life of a Sephardic Jewish woman who emigrates from Morocco to Israel and makes an unhappy marriage. As far as I know the first two were never released in North America, and they also didn’t spark anywhere near the level of national debate in Israel caused by this one. Viviane, Ronit Elkabetz’s character, has finally gotten up the courage to leave Elisha (Simon Akbarian), her doleful, subdued and devoutly religious husband. Although they’ve been separated for years, Elisha refuses to grant Viviane a divorce, which leaves her trapped by the medieval chauvinism of rabbinical law.

Although many Israeli Jews are largely or entirely secular, there is no such thing as civil marriage or civil divorce. (This left me wondering: Do Muslim or Christian citizens of Israel require religious sanction to get married? Do those marriages have a different status?) Anyway, divorce can only be handled by the rabbinical courts, and can only be finalized when a man physically hands his wife a triangle-folded document of renunciation (normally called a “Get” in English) that stipulates, among other things, that she is now “available to any man.” Without his cooperation in this ritual, a woman has little recourse. If she can’t prove that her husband has abused her, neglected her or cheated on her, she is pretty much stuck.

Across five years of argumentation, accusation and Talmudic debate between Viviane’s suave, secular-minded lawyer (Menashe Noy) and Elisha’s pedantic and sanctimonious rabbi brother (Sasson Gabai), many things are revealed. Character witnesses backfire disastrously or spread irrelevant gossip, decades-old synagogue feuds are rehashed, and the supposedly idyllic older couple who live next door to the Amsalems are forced to spill their dark secrets. (This won’t matter to most American viewers, but “Gett” features a parade of well-known Israeli character actors.) The three learned rabbis sitting in judgment on the case veer from excessive interest in the details of female chastity and morality to pious lectures urging Viviane to go back home and be a better wife. It begins to seem as if there’s an open secret in the courtroom that everyone knows but no one mentions, and that both Elisha and Viviane are finessing certain intimate questions (or telling overlapping lies, in one last act of marital concord). But the true nature of their marriage, along with the question of why Elisha won’t let Viviane go, remains mostly veiled from us. At first I thought this was a weakness in the film, but now I see it differently.

We only see Elisha and Viviane together outside the courtroom once, exchanging a few words in French about their adult sons. (Since they’re from Morocco, the movie’s frequent lapses into French are plausible enough. It may also reflect the fact that Abkarian, a French actor of Armenian heritage, doesn’t speak Hebrew.) In Abkarian’s careful, composed performance, Elisha is a complicated and unhappy person more than a pig-headed, villainous zealot. He seems isolated and depressed, clinging to a woman who long ago stopped loving him like some modern-day Job embracing his meaningless torment. Elisha has the power to make Viviane miserable and he uses it, but this endless, pointless and intrusive public inquiry into a painful private matter that ought not to be a matter of law and cannot be explained – these two people just aren’t right together – is damaging him as well.

To be sure, “Gett” is not about Elisha; it isn’t his sexual morality or “wayward” nature or lack of commitment to “making a Jewish home” that are on trial. (When the camera lingers on Ronit Elkabetz’s long legs or lustrous dark hair, the salacious intent is deliberate. None of the men in the courtroom, whatever their intentions may be, can resist viewing her as a sexual object.) Viviane comes up against a fundamental contradiction of our time, one that once again is not restricted to one country or the eccentricities of one faith. If she stands for the individual confronting bureaucracy, she is also a female individual, demanding her liberty from a male bureaucracy that doesn't want to give it to her.

In Western society we have decided, at least in theory, that women are adults empowered to make their own decisions about their lives, including such things as sex, childbearing, marriage and divorce. As Viviane discovers, that theory is not accepted in all quarters, and has never been fulfilled in practice. Her situation is obviously different from that of a woman in Saudi Arabia, and different again from that of a woman in New York City or in rural Texas. (I would say that “Gett” paints a complicated and ironic portrait of gender relations and the nature of female identity in Israel, but I’m not qualified to discuss its accuracy.) The larger point is that the old idea of women as male property, whose social role as breeders and nurturers requires official oversight, is deeply inscribed in law and custom, morality and culture. None of us escapes it entirely, and Viviane’s escape from her husband requires a chilling final surrender.

”Gett: The Trial of Viviane Amsalem” is now playing at the Lincoln Plaza Cinema in New York and the Royal in Los Angeles. It opens Feb. 27 in Chicago, Miami, San Diego, San Francisco, Stamford, Conn., and Washington; March 13 in Ithaca, N.Y., Sarasota, Fla., Winston-Salem, N.C., Worcester, Mass., and Austin, Texas; March 20 in Boston, Philadelphia and Santa Fe, N.M.; and April 3 in Detroit and Gainesville, Fla., with other cities and home video to follow.