Jeb's quiet wingnutty past: Why he has to distance himself from... himself

All the geniuses calling Jeb Bush the "moderate" candidate in the GOP primary are missing one thing: his history 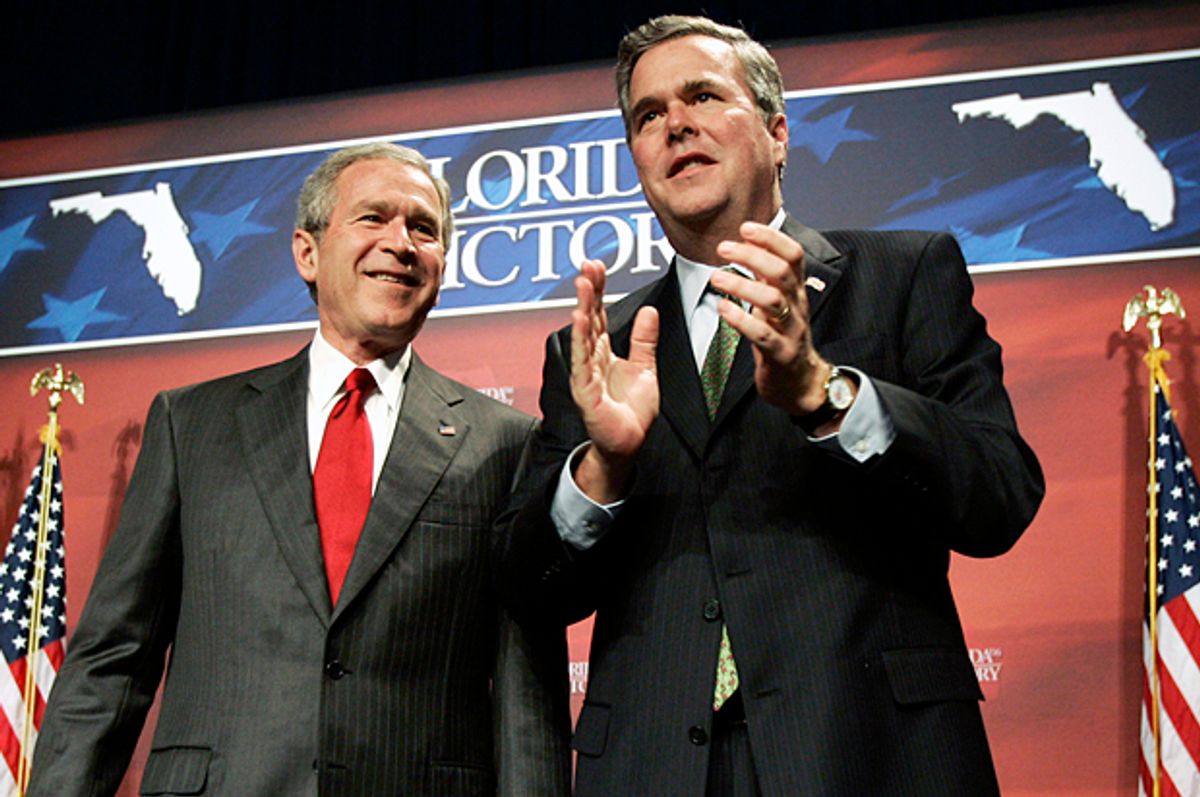 One of the more amusing aspects of he Republican establishment's quest to anoint Jeb Bush as the "moderate" candidate who can bring all sides together is that the poor man is going to have to walk a tightrope made of dental floss over the next year or so -- as he attempts to obscure his wingnutty past from the donor class, without alienating the right wingers he needs to vote for him. Managing these two competing constituencies is a difficult task for all the GOP presidential hopefuls, but Bush's is perhaps the toughest.

There has been a lot of talk about how he will have to find a way to adequately explain his support for immigration reform and the Common Core education curriculum to the base, which loathes those two programs with a fervor they usually reserve for gay marriage and arugula. He seems to be picking his way through that and we'll see soon enough if he still has the political chops he developed as Governor of Florida to successfully dogwhistle the base while offering a sheen of "reasonableness" that will keep the political press onboard the establishment train. Those issues will be in contrast with his almost maniacal adherence to the social conservative agenda in the Schiavo case and if he plays his cards right it's possible he could neutralize his heresies. It will take skill and cunning he hasn't heretofore demonstrated but you never know.

Where Bush has a more serious problem is in foreign policy and national security.  Some of the reasons for that are more obvious than others. The most glaring, of course, is the fact that he's George W. Bush's brother. Despite what people say, W never lost the base of the party -- that 28% approval rating he had at the end were the bitter-enders who loved him for his big swinging swagger. But he was unpopular with the very people the Big Money Boyz are banking on getting behind Jeb: independents and moderate Republicans. Aside from the obvious fact that Jeb doesn't want to run against his own brother's policies, he will have a big problem with the base if he strays too far from the right's blood-thirsty foreign policy orthodoxy. But if he tacks too close a whole lot of normal Americans will instinctively recoil.

Luckily for Jeb, W isn't the only Bush he can emulate. There's his Dad, another "wartime" president whose war was substantially more popular and widely assumed to be successful even among Democrats and independents. Yesterday's Wall Street Journal reported that in the Dialing for Donor Dollars primary Jeb is signaling that he's going to follow in his daddy's footsteps rather than W's:

Jeb Bush seemed to grapple with what course he should take on foreign policy last week at the Detroit Economic Club. He responded to a question about terrorist threats by linking the rise of Islamic State in Iraq and Syria to the withdrawal of U.S. troops from Iraq. “We have to be engaged, and that doesn’t necessarily mean boots on the ground in every occurrence,” he said. Resisting a label for his outlook, he added: “I don’t know what that makes me—everyone has to have a type.”

I'd say that line needs some work. No Republican can afford to seem ambivalent or unsure of what he believes about America's place as the world's only superpower. The article goes on the say that Jeb has whispered that he admires the old school realists of his father's time, people like James "f*ck the Jews, they don't vote for us" Baker and Brent Scowcroft. And he's apparently considering hiring a former GOP White House foreign policy staffer named Meghan O'Sullivan who is more closely aligned with Bush Senior's thinking than her boss George W. Bush. This is intended to signal that he isn't going to be invading any countries on false pretenses. But then George W. Bush did the same thing when he hired Condi Rice, his father's former staffer. She was intended to be a sign that he would be following what he proclaimed as a "humble" foreign policy (Hey, it worked once. Well, with the help of Jeb, the Governor of Florida where W "won" with 537 votes. But that's a different story.)

Bush Senior's worldview was undoubtedly sincere. He had been running in the "realist" circles for decades and contrasted himself with the aggressively chauvinistic style of Ronald Reagan. He really believed in that New World Order coalition stuff. It's unknown what W really believed but there's every reason to suspect that he hadn't given it much thought prior to running for president and followed the lead of whomever sounded good to him. During the campaign using his Dad's example was useful, but once in office he leaned on his father's Secretary of Defense, Vice President Dick Cheney, who brought in his old pals who hadn't had as much influence on Poppy. After 9/11 they had free rein. But there's little reason to believe that W himself was motivated by ideology. He seemed to be personally motivated by a desire to avenge the terrorist attack by al Qaeda and to "finish the job" his father had left undone in Iraq.

But long before 9/11, long before the right declared that Islamic extremism was an existential threat to anyone, much less the United States, there was, as many will recall, a little neoconservative group called The Project for a New American Century. Poppy wasn't a member and neither was Junior. They were in the camp of the more mainstream Republican realism and New World Order coalition building --- the camp the PNAC was rejecting. These neocons had a number of other influential Republicans on board, including those future Bush administration figures, Cheney, Rumsfeld and Wolfowitz. I don't know if W had ever even heard of them before he became president but even if he did it's unlikely he understood the scope of their agenda. In any case he never articulated an opinion about it during the campaign.

What was the PNAC's agenda? A lot of things, too much for one little essay. But in a nutshell, it was simply to make America's number one priority the ongoing, unilateral military domination of the world. The specific ideology goes back to the 1970s and had many explicit plans for Europe, Russia and Asia. But in the 1990s there was tremendous pressure building on the right to remove Saddam Hussein from power and neutralize Iran due to the threat of nuclear development and the hazard that posed to Israel. (Terrorism wasn't of any specific concern, they were hung up on rogue states, aka the "Axis of Evil", led by totalitarian leaders and pretty much missed the rise of Al Qaeda all together.) They spent their time nurturing Iraqi expat conman Ahmad Chalabi and working the levers of the DC social circuit to move the political dial their way, awaiting their turn at executive power. One of the most telling passages of their year 2000 manifesto called "Rebuilding American Defenses" was this:

"The process of transformation, even if it brings revolutionary change, is likely to be a long one, absent some catastrophic and catalyzing event––like a new Pearl Harbor"

They sure got one. The catastrophe of 9/11 was the catalyzing event they needed to boldly defy George Bush Senior's wussyfied New World Order and assert America's unilateral military domination. They didn't hesitate to act. We all know the result.

And what does all this have to do with Jeb? Well, he happens to be the only Bush who was a card-carrying member of the PNAC. He was a neocon long before neocons were cool. In fact, one must suspect that his early defiance of his father and brother in this regard signals the act of a True Believer. He didn't need to do it. He was Governor of Florida, not head of the Senate Armed Services Committee. He must have really thought the cause was righteous.

Now he's in the terrible position of having to distance himself from the reckless foreign policy mistakes of his brother --- mistakes that were initiated by the neoconservative claque of which he is a charter member. He's forced to pretend that he's actually an adherent of his father's foreign policy school when in fact he was among those who rejected it with disdain back in the 1990s, an act which led to his brother's fateful decision to invade Iraq without good cause.

Trying to manage these various pulls of family loyalty and defiance with all these warring ideological constituencies would be a challenge to the most skilled politician who has been sharpening his game for years in anticipation of a presidential run. That politician is not Jeb Bush. Right now he's being given a smooth ride because the press and the political establishment is afraid that the lunatic fringe might get a crack at the white house and they see Jeb as the only sane alternative. The problem is that Jeb's one of the crazies too, always has been.

The bottom line is this: if you liked Dick Cheney, you're going to love President Jeb Bush. It turns out that Jeb's the guy W was pretending to be.