"What We Do in the Shadows": A hilarious mockumentary on suburban vampire angst 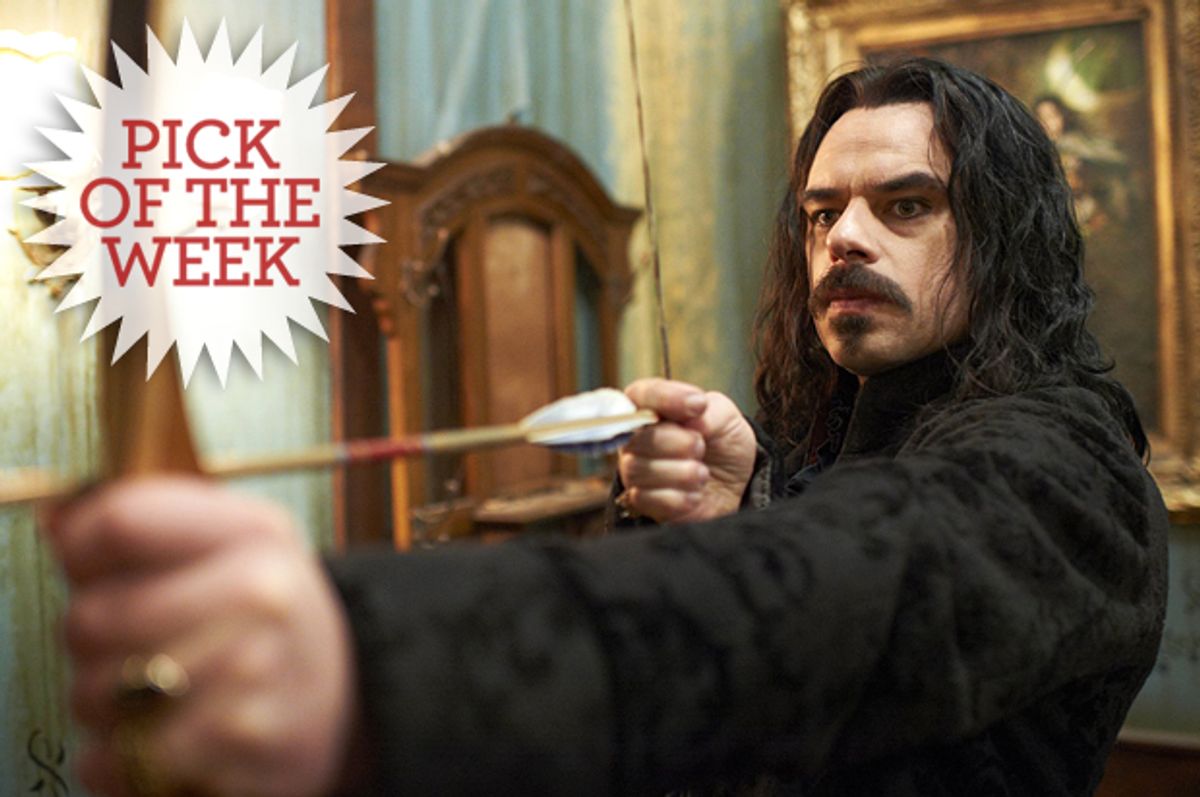 Jemaine Clement in "What We Do in the Shadows"
--

Believe me, I get it: You feel no desire to see another vampire movie, or even to acknowledge that it exists. As for the whole mockumentary thing, that petered out around 2008. Maybe that cultural exhaustion and exasperation is the secret ingredient that makes Jemaine Clement and Taika Waititi’s doleful, delirious deadpan farce “What We Do in the Shadows” so irresistible: Combine two different things that are totally over, and the chemistry is magic! We could also go less high-concept and decide that this New Zealand acting-writing-directing duo, both key members of the ensemble behind the cult TV hit “Flight of the Conchords,” have crafted a surprisingly delicate vampire spoof that’s both hilarious and respectful, and that captures all the silliest, scariest and saddest aspects of the bloodsucking tradition in one delicious package.

“Conchords” fans will have a pretty good idea what to expect from the dry and gleefully nerdy post-Python sketch comedy that’s on offer here, and Clement and Waititi get to inhabit especially enjoyable characters. The former plays a hirsute Eastern European vampire named Vladislav – quite possibly the original Vlad the Impaler! – once known and feared throughout the Carpathians as an especially tyrannical and sadistic medieval aristocrat. Vladislav has been mellowed, however, by eight centuries of vampire existence and by the sedate rhythms of undead life in suburban Wellington, New Zealand. Vladislav rarely uses his torture chamber these days, he tells us later in a reality-TV-style side interview; he needed that outlet when he was “in a dark place.”

Waititi (also the director of the films “Boy” and “Eagle vs. Shark”) plays a much younger vampire, a fastidious 18th-century dandy named Viago with an awkward smile permanently fixed to his face. It’s Viago who has invited a documentary crew into a Wellington vampire household (we are assured that the crew is protected by crucifixes and solemn vampire vows): Like everyone else in contemporary culture, the nightbreed who feed on human blood seek to be better understood. What follows is partly a “Big Brother”-style reality spoof, complete with domestic melodrama, introspective talking-head interviews and suspiciously stagey confrontations. But also, far more surprisingly, it’s one of the richest and most satisfying depictions of the vampires-in-the-modern-world conundrum ever concocted. (And the gruesome special effects are far less cheap-looking than I expected!)

On the morning we arrive, Viago has called a house meeting because Deacon (Jonathan Brugh), a relatively youthful vampire with a Byronic ladies-man mien and leather pants, has been shirking dish duty – for the last five years. It’s embarrassing to bring people over with the kitchen so disgusting, Vladislav complains. Deacon correctly observes that the only people who ever come over are about to be eaten, but Viago and Vladislav insist that he’s missing the point. Communal existence depends on shared responsibility! That pile of congealed dishes – literally congealed, in this case -- is too gross even for a bunch of predeceased dudes, and despite Deacon’s protestations that “vampires don’t wash dishes” or scrub bloodstains off the upholstery, there he is a few minutes later with yellow rubber gloves on and a sponge in his hand.

These three squabbling but affectionate companions have a fourth flatmate too, the designated eccentric loner who is exempted from domestic chores. This is Petyr (Ben Fransham), a hissing, gray-skinned, long-eared demon modeled on Max Schreck’s legendary vampire in the 1922 “Nosferatu,” who resides in the basement amid the disassembled pieces of his victims. (Viago: “What is that? A spinal column? Eww!”) At first, Vladislav wonders if they should hold the meeting pending his arrival. “Petyr is 8,000 years old,” says Viago with decision. “He’s not coming to the meeting.” Furthermore, Petyr is really, really scary, even amid this fish-out-of-water farce about ancient undead creatures confronting feminism, convenience stores and the Internet. (Viago wants to know if he can use Google to find a gorgeous scarf he misplaced in 1912.) He’s an ancient and malevolent entity not interested in anything except killing, and our reminder that whatever deep-seated human fears lurk behind the vampire legend, they aren’t sexy or glamorous at all.

Deacon, Viago and Vladislav are old-school vampires, frayed and tattered by centuries of undead life, who play by old-school rules. Sunlight will sizzle them to death; they cast no reflection. Silver, garlic and crucifixes – all intolerable. They have the power to hypnotize, enslave and feed on humans; Deacon has a “familiar” named Jackie (Jackie van Beek), a suburban housewife and vampire wannabe who’s starting to complain about the sexist boys’-club culture of the undead world. They can fly – well, a little bit – and change into bats. But they’re not even half as cool as they pretend to be, and any resemblance to Rob Pattinson’s Edward Cullen requires advanced beer goggles. They’re basically a bunch of aging Goth losers with mismatched thrift-store outfits who live in a filthy house. (Viago’s campaign to keep the sofas and carpeting gore-free misfires in spectacular fashion.)

Petyr accidentally screws up the household chemistry when he converts a new vampire out of a human guest named Nick (Cori Gonzalez-Macuer), who doesn’t want to give up his software-engineer best friend Stu (Stuart Rutherford), and also doesn’t want his new housemates to eat him. Nick can’t help himself from telling every woman in every Wellington nightclub about his newfound immortality, sometimes claiming that he is “ that guy from ‘Twilight’” and that’s why these cameras are following him around. There’s worsening Sharks vs. Jets tension, or at least a heated exchange of juvenile insults, between the vampires and the Wellington werewolves, a pack of rugby-player types who bay at the moon and mark things with urine. And then there’s the fact that the upcoming vampire-witch-zombie annual ball, to be held at the Cathedral of Despair (actually a suburban bowling alley), may bring Vladislav face to face with his deadliest nemesis, “the Beast.”

The documentary premise never really gets in the way. It’s just a convenient frame for this collision between venerable mythic archetypes and mundane existence – and of course for a lot of inspired riffing, much of it seemingly improvised. When Deacon suggests eating a couple of officious cops who’ve responded to a noise complaint, Vladislav isn’t so sure. They’ve already pointed out that the house has no smoke alarms! “Let’s see what other safety issues they notice,” he says. “Then maybe we eat.”

For a loose-limbed spoof with no real plot, “What We Do in the Shadows” is startlingly effective at creating characters we care about, which testifies to the fact that Clement and Waititi have created a world with clear governing laws (albeit ridiculous ones) and never violate those parameters. We’re glad that Vladislav stops Deacon from eating those well-meaning cops, glad that Stu’s increasingly precarious status as a human being has an upbeat denouement, and thoroughly charmed by Viago’s unexpected reunion with a long-lost flame. (Vladislav does indeed confront the Beast, on the dance floor of the Cathedral of Despair. I will say no more than that.)

If Jim Jarmusch vividly reimagined the vampire caste, in “Only Lovers Left Alive,” as aging ‘80s bohemians grown too cool and too bored for life, this movie has far less artfulness but way more pathos. (I don’t recall Tilda Swinton and Tom Hiddleston discussing the dishes.) Despite Jackie’s recruitment efforts, Deacon and Vladislav haven’t tasted virgin blood for decades (the latter’s explanation of why virgins are yummier might be the movie’s biggest laugh line). Their powers of hypnosis are fading, and they’ve settled into a bourgeois existence that Jarmusch’s vampires would find contemptible. They’re not cool enough for despair or Detroit or Sufi poetry or whatever; they’re just a bit lonely and confused by the world and putting up the bravest front they can manage. Like the rest of us, undead or otherwise, they muddle through the inanity of everyday life, encounter inevitable tragedy and fail to keep stains off the furniture.

”What We Do in the Shadows” opens this week at the Sunshine Cinema in New York and the ArcLight Hollywood in Los Angeles. It opens Feb. 20 in Boston, Philadelphia, San Diego, San Francisco, San Jose, Calif., Seattle and Washington, with more cities to follow.

Comedy Flight Of The Conchords Horror Horror Films Horror Movies Jemaine Clement Mockumentary Movies New Zealand Our Picks Our Picks: Movies Taika Waititi Vampires What We Do In The Shadows