Surprise: The creators of "High Maintenance" really do smoke a lot of weed 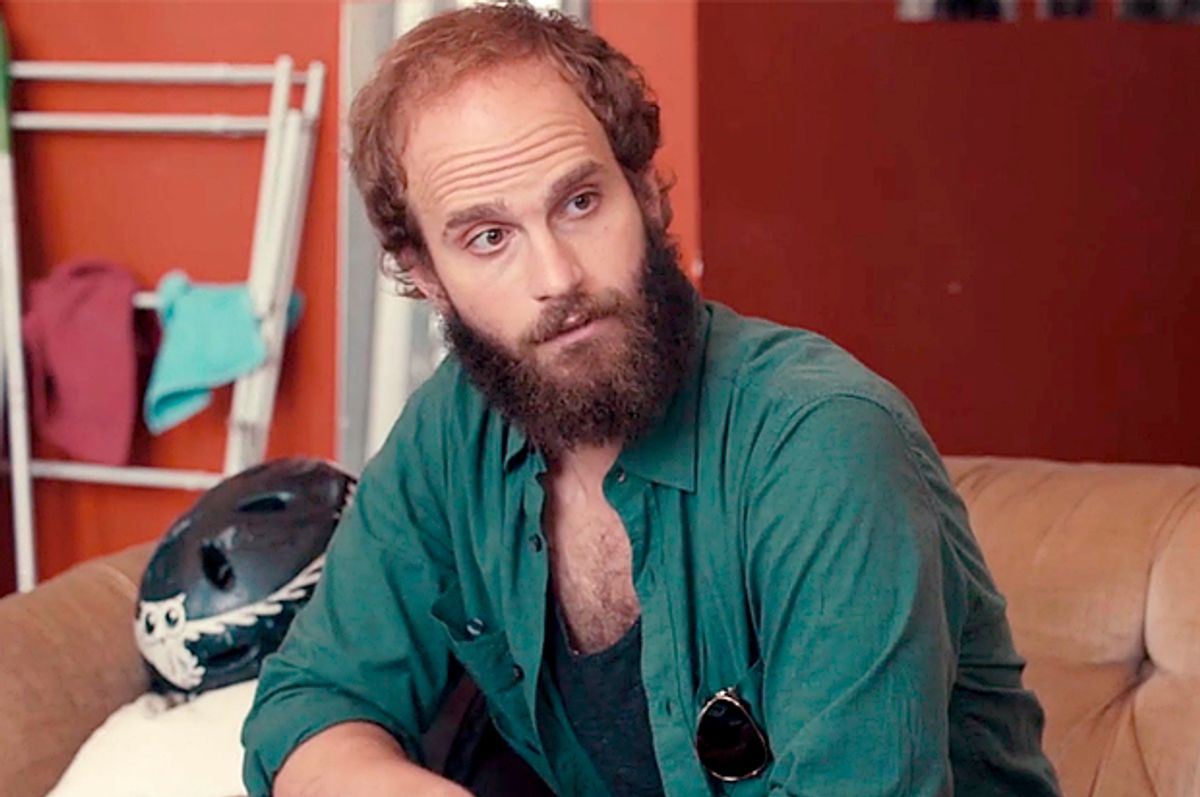 In an era of well-funded prestige television, it's surprising and refreshing to discover that one of the best portrayals of New York City living is the web series Vimeo's "High Maintenance." The show comes at New York from a fruitful and largely unexplored angle—how urbanites get their weed. As I wrote a few months ago, portraying an underground (if decriminalized) economy allows "High Maintenance" to touch on many aspects of urban living in one small, compact transaction. Our dealer works by referral, and comes into his customers' apartments to do business, and the characters are buying pot to feel better, meaning that the audience gets to see how these disparate people choose to relax, alleviate their anxiety, or just dick around with their friends.

Creators Ben Sinclair and Katja Blichfeld usher each episode to life; the two are married to each other, and Sinclair stars as the nameless, helmet-clad dealer. Though he plays the main character, "High Maintenance" isn't about him; he's the empty space around which the rest of the fragmented, flawed community revolves. Despite being a somewhat fringe show from breakout showrunners, "High Maintenance" has the assurance of long experience—due, I think, to the creative relationship between Sinclair and Blichfeld, who can both anticipate what the other is going to say and yet be sometimes still surprised by it, too. I sat down with them to talk about latest batch of six episodes they recently released—including "Sabrina," a foray into mushrooms, and "Esme," an episode about a rival dealer. In addition to drugs, politics and the creative process, I asked them about the unexpected appearance of a storyline very similar to one of their episodes—played by the exact same actress—showing up on Fox's "New Girl."

What's it like doing a show about something illegal?

BS: We recognized that the illegal aspect of “High Maintenance” was, like, the sexy part of it. But more so, it was the actual act of just taking five minutes to tell a story from beginning to end, and having this action [selling pot] happen with the confrontation. After we came up with the idea we were like, “Oh! And our approach to weed is that we'll normalize it and be non-judgmental about it.” But when coming up with the idea, it's not like we had any agenda to make a show about weed.

KB: In fact, I even felt a slight amount of hesitation about putting myself out there in a public way as somebody who was a pot smoker. I'm not saying we were promoting it, but trying to normalize it definitely is a stance. It feels like an indirect way of saying, “Hi, I smoke weed, arrest me!” So there was an element of hesitation for a second. But we also saw this opportunity to normalize weed that felt like a relief.

BS: With my family, especially. [To KB] Your family—

KB: I was already out to my parents as a stoner since, like, my late twenties. [To BS] But not to yours.

KB: I feel like you told your dad at our wedding brunch, when you walked them to their cars and were like, “By the way, we smoke a lot of pot!”

BS: I was like, “That's just how we deal with our issues” and my dad was like, “some people do that with waffles, so...”

Are you guys smoking actual pot on the show?

BS: No, not on the show. The stuff we smoke is this "chillax" blend. It's mullein and mugwort and rosehips. There's actually a few different blends. I think the mullein and the catnip is what causes a calming effect but not a narcotic effect.

KB: They sell it at our local apothecary in Ditmas Park. It was funny—we went to shoot a random New York Daily News piece and we went into the store, the Sacred Vibes place, and asked if we could film there. The woman was like, “Oh, it's you guys!” She had heard, she had seen herself name-checked.

KB: She didn't seem super enthused about it.

Just to be clear, I didn't want to knock your professionalism at all.

BS: Honestly, there has been an episode or two where I'm like, “There's a lot of shit going on right now, and I'm just going to go toot in the back and keep it on the DL.”

Your show does the most realistic portrayal of this milieu of New York—in part because you're really going into people's homes. It’s very intimate.

KB: Thank you! Those are real homes.

Where do you get your inspiration for these stories? Is this stuff you've experienced?

BS: It's become a therapeutic event for us.

BS: We're both pretty anxious people in reality. We have all kinds of emotions that we don't know what to do with. We talk them out between us and with our friends—

BS: —but for the past two years we've been funneling a lot of that shit into this show. The thing is, people are like, oh, I get it.

KB: I have a lot of anxiety, and it is medication. Period.

BS: For real, for both of us. I was thinking about this—an artist of any kind has to be affected by things. Our struggle that we're dealing with now is how to be affected without being overwhelmed. Weed is definitely helpful in tempering that. Goddamn—I can't even think about how many times we'll be fighting our faces off with each other and then we'll smoke weed and it's like, “Oh my God, we can talk about this!” I feel pretty strongly about weed being okay.

KB: We try to really stay away from the political aspects of talking about weed. However...

BS: I think it's so not correct for it to be illegal.

KB: Yeah, we have to say that it should not be illegal. We're very much in favor of medical marijuana. I just think it's ridiculous that it's not legal for everybody, medically, at the very least.

BS: If you make a drug and it doesn't contribute towards people working harder or making more money, it's illegal. And that is so fucking stupid. It's just so tied to an agenda. I don't want to get political because I just don't want to deal with all that mess, but I feel very strongly that arresting people for drug use is a scapegoat for something much larger.

Something that's interesting about this season is that you introduce another drug with the mushrooms episode [“Sabrina”]— which, by the way, was fantastic. What was behind the decision to do that?

BS: Last year I got really interested in psychedelics—not in taking them, but in the usefulness of them. Psychedelics are not addictive. They’re actually so non-addictive that if you try to take mushrooms two days in a row it won't work the second time.

KB: We can tell you from first-hand experience.

BS: I think there is a lot of therapeutic value to them, so I just got interested in them because we started talking about how weed is useful. The research just spread out from there.

KB: I'm the one who maintains our Tumblr, and even when I'm not actively posting things I'm still just perusing what's happening in the Tumblr-verse. To be honest, I feel like that is such a good gauge of what trends are occurring. And I saw this increase in imagery of mushrooms.

KB: Yeah, last year Paul Smith had a whole line of shirts that had printed psychedelic mushrooms on them. It was pretty obvious that it wasn't just coming into our world—it's definitely a thing that's happening right now. People are rediscovering ‘shrooms and trying them for the first time. They're sort of circulating again.

BS: I wouldn't be surprised if in this post-Bush, post-recession era, that a lot of people who played by the rules and still got fucked are like, “All right, so what else did I play by the rules on that now I don't have to listen to? What else was I wrong about?” I think pot and mushrooms and beards... a lot of stuff having to do with our show: changing jobs every year, changing neighborhoods, I think it's all part of getting away from these baby boomers who spent all of our social security, you know what I mean? It's just reevaluating the values that are held as good values. I think the mainstream has really picked that up. And that's why the younger generation of people hate being sold to.

KB: They can see right through it.

What do you feel the show has taught you? Where does it go from here?

BS: I think it goes where we go.

KB: We're very interested in portraying what is very real to us, what feels authentic, and what we can verify through our own experience. That being said, that very much informs the demographic you're seeing represented, and the ones you'll probably continue to see. Largely because it's what we know, but also because the conceit of the show is that it's a referral-based service. There's going to be a wild card in there now and then, of somebody who got a number through some different means—

KB: Yeah. He probably got the number from someone in his building.

BS: We think about that stuff. The exciting part of the show is that we are finding out how the characters we created separately, how they know each other, where that referral went.

KB: That's the most fun part for us. Even in “Sabrina,” the Dinah character—we did now know who that person was, but we kind of decided, as we wrote this episode, what if Dinah was the woman we saw at that janky TED talk in “Matilda”? The secret is that we are discovering it as we're going.

Lastly: Greta Lee on "New Girl"—was that you guys?

BS: No! I saw it on Twitter and I was like, what the fuck is going on here?

KB: Ben freaked out. He still hasn't seen it.

BS: At first, I was very upset about that. Now I'm actually kind of flattered by it, in a whole mix of complicated emotions.

So they were not in touch with you about it.

KB: It's real weird. She's a friend of ours; we share a lawyer and representation. I don't think they could intuit what it would look like and that when they saw it, visually out there, that it would so closely resemble what we did. That is really what made all these people start tweeting us like, they ripped you off! We may comment on it in the future, in a veiled way. We're working on it.

BS: Maybe we’ll feature Z.D. [Zooey Deschanel]. She can be a ukulele maker, and she can make custom ukuleles that she sells on Etsy. You know.