Learning to breathe in Mexico City

North America's most populous city has seen a remarkable turnaround in air pollution — but is it good enough? 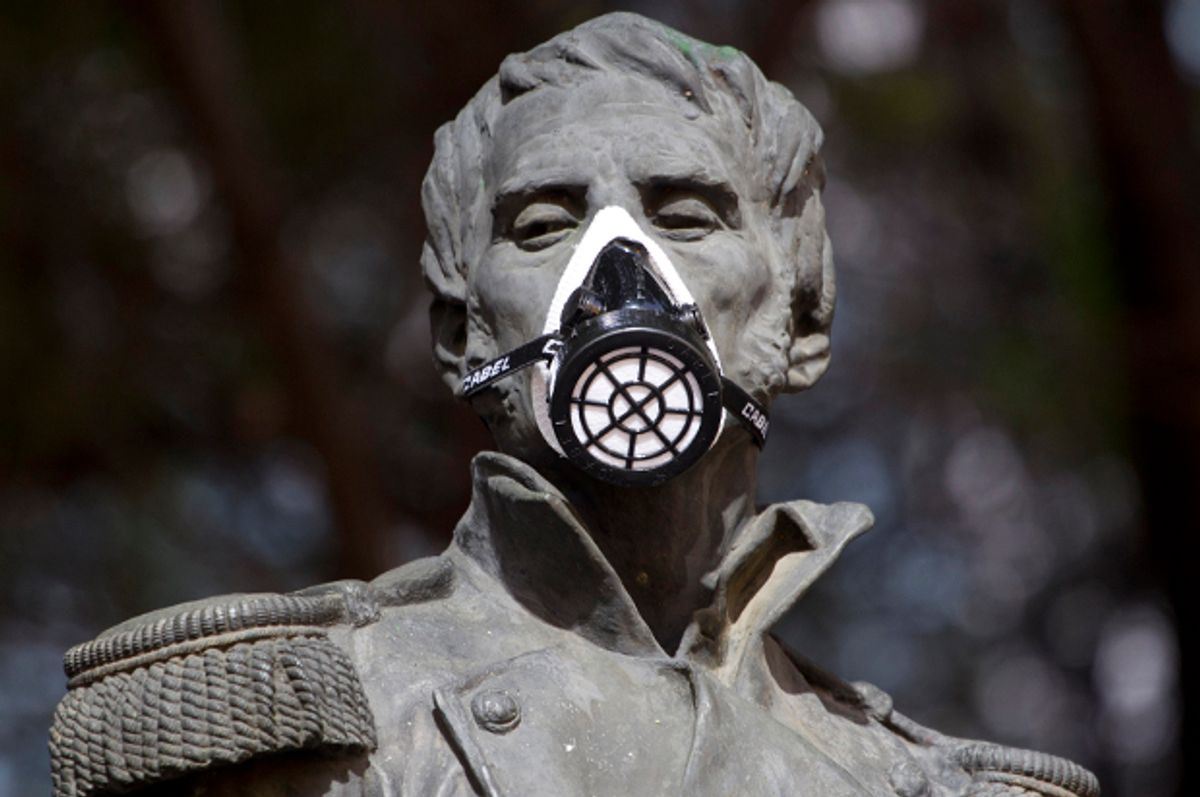 A gas mask covers the mouth on the statue of independence hero Leonardo Bravo in Mexico City, Feb. 28, 2012. (AP/Eduardo Verdugo)
--

There are dark, shared memories here about how bad the air used to be. Foreign diplomats, citing the health hazard, could retire early. Birds died in flight. Children thought the natural color of the sky was gray. As a visitor, it is hard to assemble these anecdotes, strange beyond imagining yet set in a modern and familiar city, into a rooted urban past. Instead, they project a parallel world, the Metropolitan Cathedral seen in an oil-smeared puddle, that seems unbound from time. It’s a Mexico City of the mind, vanquished but readily recalled by a deep breath at a busy intersection.

If you lived through those dirty days — in 1992, the United Nations declared Mexico City the most polluted city on the planet — no blue sky goes unappreciated. “People my age remember when schools cancelled classes, or that they wouldn’t let us do physical exercise in the open air at that time,” says Dr. Armando Retama, the head of the city’s environmental department. “Adults who grew up then, that’s what we remember most.”

But younger people, Retama believes, are both less conscious of and less content with the past two decades of progress. Older folks have stories of the past; the city’s millennial generation, who make up half the population here, have expectations for the present. “They are aware that the city is polluted,” Retama says, “and that moves them to action. That’s important, because the reality that they live could be better.”

So stands Mexico City in 2015, reflecting proudly on a string of public victories against air pollution, glancing nervously at an urban landscape with few easy targets. Since the early 1990s, lead pollution has fallen by 95 percent. Sulfur dioxide and carbon monoxide are down 70 percent. Ozone levels have fallen too. Small-particle pollution (PM 2.5) levels are lower than in some European cities. All this while the metropolitan area has added more than 6 million inhabitants, swelling to a population of 22.5 million.

But critics say progress has slowed. “[The reduction in pollution] was really, really good, but in the last more or less two years that trend has stopped,” explains Gabriela Alarcón, the director of urban development at the Mexican Institute for Competition (IMCO). “Now it seems like an inflection point, that we might stall at a level that’s not healthy yet, not healthy enough.” There are currently about 50 days a year in Mexico City when exercise outdoors is considered harmful. That’s an improvement from the ’90s, when outdoor exercise was hazardous virtually every day of the year. But it’s still shocking by European or American standards.

Is the city at risk of resting with its recent accolades? “There are some indications that all the policies that did work have been exhausted, or have reached their limits on what they can contribute to the improvement of air quality,” Alarcón says.

If Mexico City’s environmental history can offer hope to hazardous megacities like New Delhi and Beijing, its near future poses a new challenge. How does a city without the cushion of prosperity that exists in London or Copenhagen implement first-world environmental regulations?

“We’ve always said there’s a magic solution to solve the air problem in Mexico City,” Retama told me when I met him in his office earlier this month. “The magic solution is getting rid of cars. We retire cars, the city is converted into a clean zone.” Transport is by far the largest component of the city’s energy use (more than 60 percent); cars, trucks and buses are the dominant source of pollution, contributing more than twice the share of industry.

The age of a car, the city has found, is a very good proxy for its polluting capacity. One 20-year-old car produced as much emissions as 30 new cars, Retama said. The city’s automobile population has more than doubled since the early ’90s, but pollutes 10 times less.

But the age of a car is also a good indicator of the wealth of its driver. These are not vintage hot-rods, but rickety minibuses and clattering sedans. “It seems almost gratuitous,” opined the Economist, “to cosh drivers over the head with the most draconian driving ban in the city’s history.”

In Europe, polluting cars are taxed. But that policy would be particularly regressive in Mexico City. “Here, the people who have the old cars are the people with the least money,” Retama pointed out. “You take away the car, perhaps you’re taking away their source of work, the source of income for their family.”

Supporters and opponents of driving restrictions all agree that the long-term solution to Mexico City’s lingering air problems lies in an improved and expanded public transit network. The city’s 15-year, billion-dollar Plan Verde, begun under the administration of Marcelo Ebrard in the 2000s, has included the provision of a model bus rapid transit network, a bike share system, and an expansion of the world’s eighth-biggest metro system.

But the system is uncomfortably crowded — the articulated red BRT vehicles are sometimes referred to as “sardine buses” — and offers poor coverage to the sprawling region of 21 million people. Commuter rail, which carries millions into cities like New York, Paris and London, is represented by only a single line here. The city’s glittering NAFTA-era business district has neither rail nor rapid bus connection to the city, and is a 90-minute local bus ride from the city center. Public transit, to most Mexico City drivers, is not an option that can be incentivized with driving restrictions. Often, a car is the only timely way to get from Point A to Point B.

Compounding this infrastructural problem is a political one: What today constitutes metropolitan Mexico City is divided between the Distrito Federal (or city government) and the State of Mexico. The latter is poorer and larger than the District; its cars are older and its industries pollute more. Those problems fall at Dr. Retama’s desk, but they are not legally his responsibility.

A congestion pricing policy, an option Retama said the city is considering, could provide some relief to the busy center and funnel money toward public transit. But it seems unlikely that such a measure would garner sufficient political support. While Mexico City still has a handful of “contingency” events each year when alternate-driving days are imposed, while a frisbee of brown smog still settles in the valley in the afternoons, on most days the sky is once again blue, and you can see faint mountains in the distance down the big avenues.