Progressives need not cower before a militaristic right. Let's define a smart, patriotic agenda to match our values 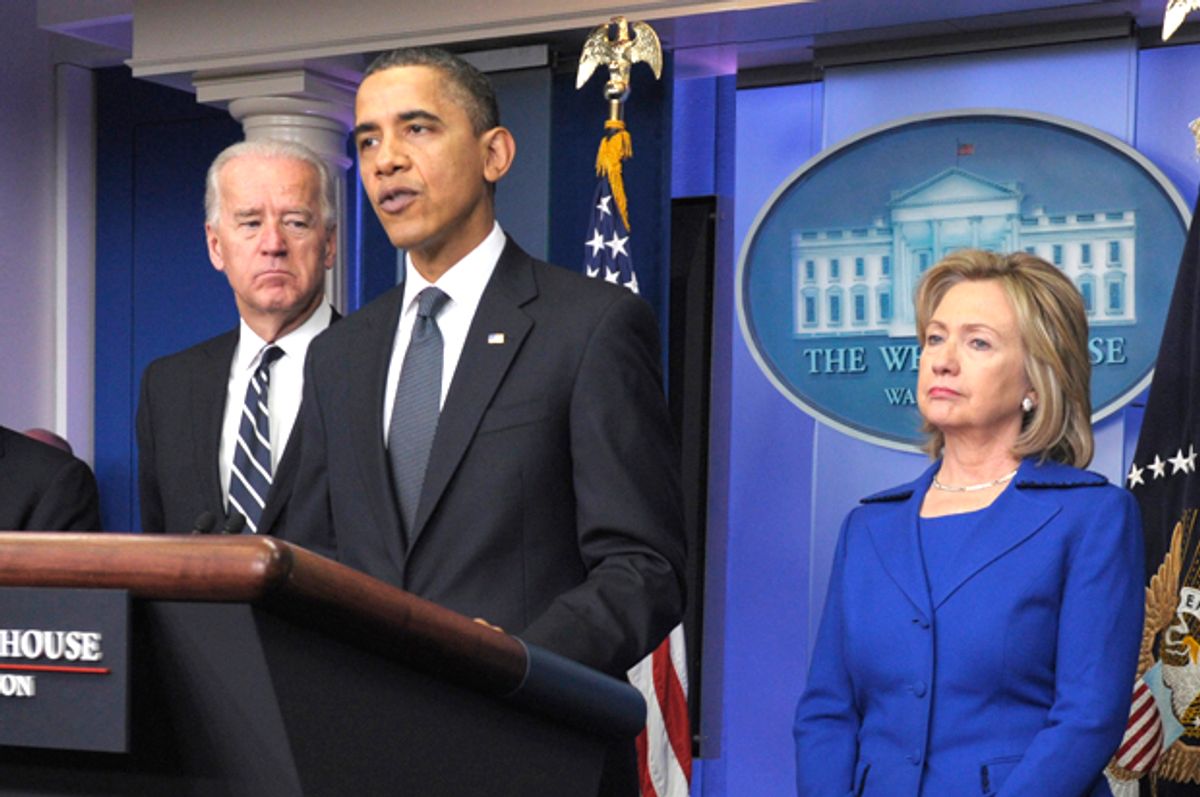 America is moving left, or at least to positions Republicans have spent a lifetime opposing. Notice the GOP's awkward silence on what were so recently signature issues: immigration, minimum wage, even gay marriage and climate change. They want to gut bank reform and prolong the Cuban embargo. No one else does. They vote to repeal Obamacare but with less fanfare since most voters want to fix it, not kill it. All of their racial and sexual politics is now radioactive.

So why did Republicans just beat the tar out of Democrats? One reason is that both parties are so corrupt. This hurts Democrats more; everyone knows it’s in the Republican DNA to service the rich, so it seems less hypocritical when they do. Democrats should value their reputations more -- but even if they did, Republicans would retain an advantage on two overriding issues.

The first is the deplorable condition of our democracy. Americans think their government is corrupt, expensive and ineffective -- and that Democrats don’t get it. Republicans will never fix the government, but they won’t let it do anything either. When they fail to cut costs, they cut taxes anyway, so they win.

The second issue is national security. Here the Republican advantage is wholly undeserved. Their military adventures, driven by ideology, oil and that other fossil fuel, testosterone, put our government in hock, manufactured refugees by the millions and left tens of thousands dead. They tarnished not only America’s reputation but that of democracy itself.

Democrats must find solutions to both sets of problems. They won’t until we do. Progressives are their brain and spine. In every age of reform, we challenged Democrats intellectually and politically. Democrats, and everyone else, were better for it. But we’re not in an age of reform now because progressives are too caught up in partisan politics to force such debates.

This week we saw the price we pay for our distraction when President Obama sent Congress a draft authorization for use of military force against ISIS. It’s what he likes to call a teachable moment. He might have used it to make a case for a more enlightened national security policy.  He didn’t, so we must.

It’s been so long since we really debated national security we must start at the very beginning. What would a progressive foreign/defense policy look like? What truly makes us safer, protects our vital interests and honors our core values? Just by asking these questions we begin to realize how far we have drifted.

The Democrats so fear looking soft that they routinely duck debates they could easily win. When George W. Bush said terrorists “hate us for our freedom,” none rose to say that while fundamentalists rail at our permissive culture, as all fundamentalists do, they don’t sit around stewing over the Federalist Paper. None replied that some people hate us because they believe we exploit them and prop up regimes they despise even more.

One Bush lie led straight to another: “We fight them over there so we don’t have to fight them here.” Most Americans find this misdirection plausible on its face, but a deeper truth is that the reason we have to fight them here is that we were already over there. We won’t be safe from terrorism until we end our military follies and our dependent relations with otherwise failed petrol states.

We must state once and for all: America can’t be the policeman of the world. Democrats say it, but then slip into the old paradigm when they engage in their ‘indispensable nation’ rhetoric. The world does need a policeman and for a while we were the only ones who could afford to take the job. No more. We must give it up or pay a huge price, in dollars, blowback and lost lives.

The worst shibboleth is the one known as American Exceptionalism. It claims to rest on John Winthrop’s famed City on a Hill sermon but it traces back only to Ronald Reagan’s 1984 ‘shining city on a hill’ speech. Winthrop’s sermon was actually a stern warning to Puritans that the eyes of the world were on them. Since Reagan, the right has inverted it to justify the notion that our global dominance is preordained by God. That's a view Winthrop would regard as sinful pride.

Our leaders must share the painful lessons of our past, from how we conquered our continent to how we toppled governments the world over. We need our patriotism to be better informed. Instead we let conservatives purge our history books of all unpleasantness to make sure we never learn from our mistakes.

Appropriate a few symbols, employ a little selective amnesia, and suddenly pouring the old poison of Manifest Destiny into the new vial of American Exceptionalism is an easier trick. It wouldn’t be if our leaders had the courage to call out the perpetrators. Americans are ready to hear it.

Obama tries to convince us that the system is working. He did it in his State of the Union when he said “… it is America that stands strong and united with our allies, while Russia is isolated, with its economy in tatters.” Yes, but another isolated country with its economy in tatters is Ukraine. And while Obama deserves credit for sticking with sanctions, his restraint owes much to the fact that we don’t stand “united with our allies,” who are the ones most opposed to sending in weapons.

Obama did the same thing in his 2013 State of the Union when he nearly declared victory over Al Qaeda, calling it a “shadow of its former self.” If true, Al Qaeda casts one long, dark shadow. That it’s more a brand than an organization makes it harder to stamp out. In any case the disease has spread, due in no small part to the remedy applied.

In his last State of the Union Obama barely mentioned needing an authorization for use of force against ISIS, this despite it being among the most significant acts of his presidency. He announced his request not in an Oval Office address or even a formal East Room press conference but in the quiet quarters of the West Wing’s Roosevelt Room. It was of a piece with his decision to announce the “ending of combat operations in Afghanistan on Christmas Day on a military base in Hawaii.

A request for what amounts to a declaration of war calls for an address to the nation. Obama doesn’t want to explain why he must seek authority for what he’s already doing. He speaks of air strikes but would only bar “enduring” ground operations. He speaks of limits and transparency but would maintain the open-ended 2001 resolution some cite as authority for often unreported ground, air and mechanized drone operations far outside Syria and Iraq.

Progressives look at the last 15 years and see not success but proof of a massive systems failure. They are aghast at the denial afflicting their leaders -- their obsolete doctrines, their stunted visions. In this progressives are far closer than either Obama or the Republicans to the views of most Americans, who see what their leader can’t: The model just doesn’t work anymore.

It’s up to progressives to produce a new model. It will mean wrestling with hard questions. We face so many dangers. ISIS and its ilk are truly evil and dangerous. Yet one can believe in the evil of ISIS and still conclude that Obama’s plan is likely to fail. Absorbing the lessons of the post 9/11 world one grasps the principles of a new progressive foreign and defense policy. Among them:

1.  We must replace the old model of unilateral military intervention with a new one of multilateral conflict resolution. It is the sole alternative to bearing this burden alone. As a practical matter this means fixing the UN, starting with its Security Council, and drafting new rules for UN intervention in domestic conflicts.

2.  Our safety lies in the rule of law. We must honor it, for if we don’t, no one else will. We can start by accepting the jurisdiction of the International Criminal Court and debating on the floor of Congress the application of international law to our own foreign military operations.

3.  Our secrets are killing us. It’s time to push our foreign and defense policymaking out in the open, including what goes on in intelligence agencies. Operating in secret we overthrow legal governments. Operating in the open we enact the Marshall Plan. It could hardly be clearer which one works and which one doesn't.

4.  No more bribery. The first President Bush set out to export democracy but it turns out you can only spread democracy by example. What we’ve really been exporting is corruption and on a massive scale, as in the billion dollars in cash for bribes we somehow ‘lost’ in Iraq. Our Foreign Corrupt Practices Act forbids American corporations from engaging in bribery. It’s time we made our government live up to the same reasonable standard.

5.  We can bring democracy to globalization. To secure peace and foster prosperity, we must. Our trade policies subvert the long term interest of workers here and abroad. Other nations simply don’t do a good enough job of protecting workers’ rights and public health. It takes a strong public sector to make a strong middle class. We need new polices and even new public institutions to harness the power of globalization for the good of all.

6.  The greatest threat to our national security is climate change. Our own Pentagon says so. Credit our president for listening. But the pace of change is far too slow. We face either catastrophe through inaction or a chance for unprecedented prosperity and wellbeing through conversion to a new, sustainable economy based on conservation and renewable energy.

Our ideal remains the renunciation of violence in the resolution of human conflict. For now we must continue to pursue arms control in all its forms. Again, we must model the behavior we ask others to adopt. As Ronald Reagan told an audience in Oxford, England in one of his last public speeches, you can’t keep all your weapons and expect the other fella to give up his.

In matters of our safety we insist on realism, but that includes the realistic assessment that we aren’t as safe as we thought and that what we’re doing won’t make us any safer. America’s ready for a debate only progressives can spark. If we provide it, we can change the context of our own elections and of many others. We really are a city on a hill, which is another way of saying the whole world is watching.