The network has reached a new level of self-parody, while Rush Limbaugh has some thoughts about rape culture 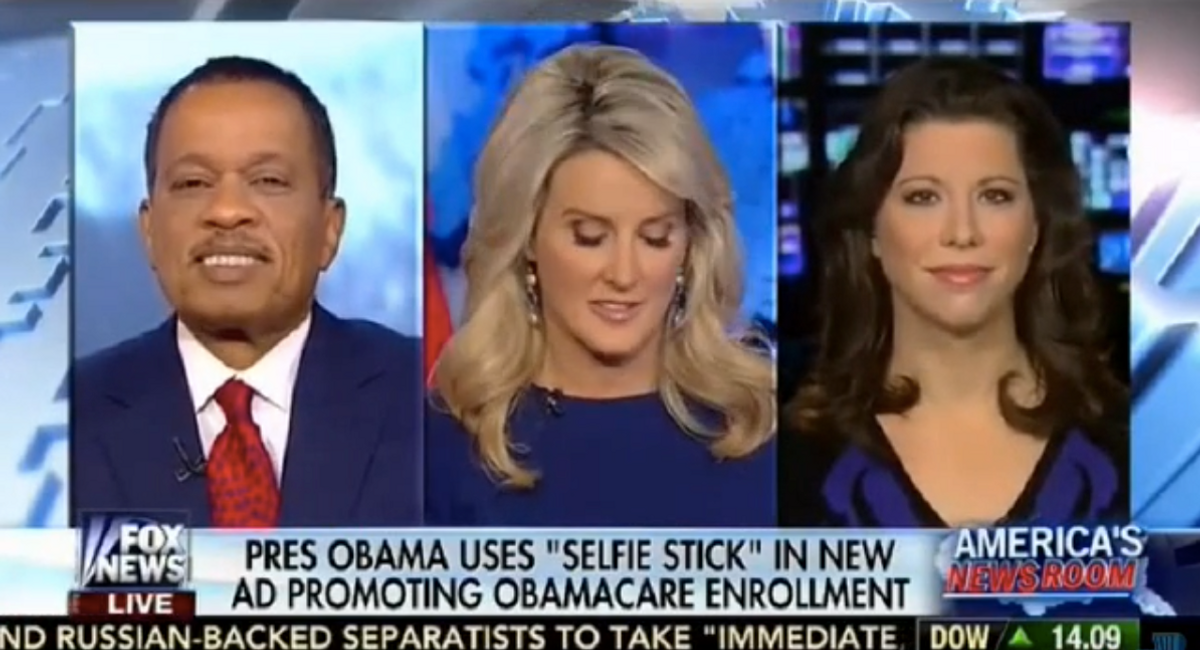 1. Fox Newsian: Fifty Shades of Grey is a sign of the end times

Pastor Robert Jeffress, a paid Fox contributor, went on Alan Colmes’ radio show this week, and thankfully, he didn’t forget to bring the crazy with him. Jeffers is pretty sure there are three telltale signs that Armageddon is coming, including: the gays getting married, “radical Islam” and most logically, Fifty Shades of Grey.

Not that he's read the book, mind you. But he’s heard things. Dirty things. Quoting scripture (2 Timothy 1), Jeffers says the end of days will be terrible, and by “terrible” he means filled with a “lack of moral restraint.” He goes on from there: "I think we're seeing that everywhere, whether it is the attempt to change the most basic unit of society, the family and marriage by redefinition of marriage, or the acceptance of perversion. You know, this Fifty Shades of Grey, or fifty shades of perversion. I think that's symptomatic of what is happening."

And he kept going, because it’s awful hard to turn off the loony when it’s on full blast, to compare gay marriage with incest.

Jeffers was basically there to promote his new book titled — what else? — Countdown to the Apocalypse: Why ISIS and Ebola Are Only the Beginning, which should, at the very least, earn him a medal for cramming the most scary words into a single book title.

Watch the segment in its entirety:

Bloviating asshole and former drug addict Rush Limbaugh took to the airwaves this week to do what he loves, which is basically arguing that rape isn’t a real thing.

Limbaugh kicked things off by complaining about Obama’s anti-domestic violence PSA at the Grammy Awards last Sunday, rhetorically asking if the President mentioned “ISIS or Al-Qaeda at all?” You know, because why even open your mouth — especially if you’re going to be talking about violence — if you’re not going to find a way to blame it all on Muslims?

He went on to accuse Obama of “making up statistics about the number of women who are sexually assaulted,” and trotted out his own figures, which (suprise!) suggest women are sexually assaulted at far lower rates. In fact, Obama’s stats came from a September 2014 Centers for Disease Controlreport, but never mind that. Let’s instead get our numbers from Limbaugh, because if there's anything Rush Limbaugh is known for being, it's trustworthy. (Forward Progressives explains in painstaking detail exactly how wrong Rush’s numbers are, here.)

Then a couple of days ago, Limbaugh doubled down and offered some unsolicited advice to college dropout and probable presidential candidate Scott Walker. When asked why he left school, Limbaugh — himself a college dropout, so he oughta know — suggests Walker should respond that he “left college because [he] didn’t want to be accused of rape someday.”

“Just ram it right down their throats!” said Limbaugh. “They’re trying to create this 'rape culture' on the campus...it seems like any man who goes to college could randomly be accused of committing rape.”

Can you believe this one is taken, ladies?

We don’t even have space to get into Limbaugh saying that liberal colleges are essentially driving young American students to join up with ISIS. That’s right: there is literally not enough space here to cover a whole week of Limbaugh crazy. Oh well. We tried.

When there’s no controversy afoot, Fox News has to create one. This week, that meant decrying the president for shooting a video to promote the Affordable Care Act on the same day the administration announced ISIS killed Kayla Mueller. And also, for using the word “YOLO” in said video.

“The president says, ‘YOLO, man!’ And for people at home who may not know what that stands for, YOLO stands for ‘you only live once,’” Fox Newsian Heather Childers said to Fox contributor Juan Williams. “Well you know who’s not alive, Juan, now? Kayla Mueller.”

If you listen to the broadcast below closely, you can almost hear the sound of the slow leak coming from the Fox Newsian’s head. Her invited guests seem confused about why they’re there, not to mention what she’s even asking.

I mean, it is really not  a good sign when Geraldo Rivera says maybe you need to dial back the kooky.

4. Sarah Palin to Wildlife: "Drop Dead." Okay, so that’s not an exact quote. But Caribou Barbie, who spoke at the North American Prospect Expo this week, did have a few choice words for actual caribou and other animals who might get in the way of the Keystone XL pipeline. And those words could basically be summed up by, "Screw you, I want my oil." Forbes reporter Christopher Helman reports that Palin told the audience that “‘the animals like the warmth’ that the pipeline gives off.” See? So we should build the pipeline...because the animals want it there. “The animals mate under the pipeline,” Palin assures us. To be absolutely sure attendees understood she’s on board with them in not giving a hoot, Palin reportedly added, “if [the pipeline] is to hurt one caribou, then that one caribou should take one for the team and allow the rest of the country to benefit.”

And with that, the reigning Queen of the Worst retained her title. Read more of Palin’s right-wing wackery.

Dogs everywhere were barking and howling in response to obvious whistles from Fox Newsians Stuart Varney and Brian Kilmeade this week.

Kilmeade, trying to counter the narrative of the economy bouncing back, lest Obama get any credit for it, pointed out that more than 46 million Americans receive food stamps. “So is this a planned strategy by the White House to keep the handouts on high levels?” Kilmeade dumbly asked.

“It is deliberate,” said Varney. “This is redistribution. This is the administration taking from this group, giving...to that group. Essentially buying votes.”

Varney didn’t use the words “Communist,” “black people,” “Mexicans,” or “immigrants,” but it’s pretty obvious we’re supposed to infer those for ourselves.