America's out-of-control war machine: Why the new authorization is so problematic

Neocons and the administration may claim the new AUMF is modest. But its scope and vagueness should scare us all 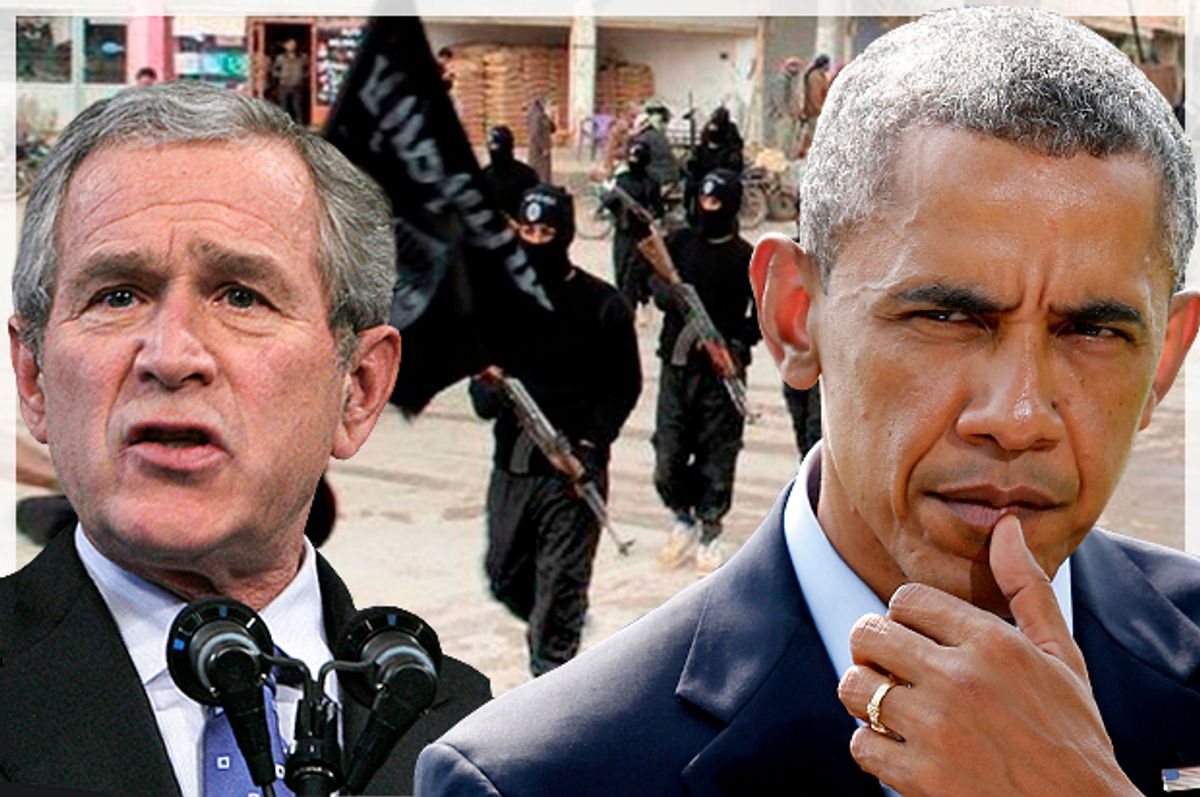 He hasn't. Instead, he has asked Congress to pass a new Authorization to Use Military Force targeting the Islamic State in the Levant.

He is finally getting around to submitting his preferred language for an AUMF almost 6 months after escalating operations against ISIL, and 3 months after his post-election speech promising to work with Congress to pass an AUMF.

In the interim period, the Administration has pointed to a collection of unconvincing explanations for the legal basis for his actions: the 2001 AUMF against those who committed 9/11, the 2002 AUMF against Iraq, and Executive Authority under Article II. Along the way, Obama has been sending Congress periodic notices under the War Powers Act, as if he is waging war as an epistolary novel.

Nevertheless, for some reason, Obama has decided it is now time for Congress to authorize the war the U.S. has been fighting for half a year. As part of the AUMF, the Executive would have to report back in another 6 months to tell them how things are going. Though that reporting requirement does not include the explicit requirement -- included in an earlier Democratic draft -- that the Executive tell Congress who we're fighting and where, or how we envision that fighting will lead to some unstated goal.

Therein lies one problem with the AUMF. It imposes no geographic limits. And, given increasingly urgent reports that ISIL has expanded its presence in Libya, Congress should assume it might include Libya in its scope (like Iraq, an area where our earlier involvement has contributed to the current chaos). Perhaps the thinking is we can consolidate our wars, re-fight all the wars we've botched under one AUMF?

At least as problematic, like the 2001 AUMF, it includes only vague language defining the enemy -- permitting the AUMF's use against ISIL and "associated forces," defined as "individuals and organizations fighting for, on behalf of, or alongside ISIL or any closely-related successor entity." Indeed, that phrase "associated forces," is precisely the phrase the Obama Administration has used to expand the use of the 2001 AUMF to include groups that didn't even exist when it was written, although the definition in this AUMF at least makes explicit that it may be used to justify war against groups that don't even exist yet.

And does "associated force," absent any geographic limits, authorize military actions here in the US? Such a claim was used for years to authorize President Bush's warrantless wiretap program. Would this AUMF similarly authorize spying on Americans in the US to ferret out anyone who might "fight" for ISIL, individually?

Ultimately, the biggest problem with the AUMF lies in what doesn't appear. Granted, the White House has ruled out "enduring ground forces" (which likely means "enduring" will one day appear in Orwell's dictionary right next to "relevant to" and "imminent," other words that have lost all meaning during the war on terror). It would, with this AUMF, finally repeal the 2002 Iraq AUMF. And it promises to sunset this ISIL AUMF after 3 years if it doesn't get reauthorized by Obama's successor.

But it remains silent about the 2001 AUMF.

Admittedly, in his letter transmitting this AUMF to Congress, Obama did commit to repeal that earlier AUMF, when he got around to it. "Although my proposed AUMF does not address the 2001 AUMF," Obama acknowledged, "I remain committed to working with the Congress and the American people to refine, and ultimately repeal, the 2001 AUMF." He then dangled this AUMF process as some sort of practice run for "tailoring" the 2001 AUMF. "Enacting an AUMF that is specific to the threat posed by ISIL could serve as a model for how we can work together to tailor the authorities granted by the 2001 AUMF."

That dangle came in a letter that reiterated Obama's claim that he doesn't really need them to pass this ISIL AUMF, because he has all the authority he already needs. "Although existing statutes provide me with the authority I need to take these actions," Obama's letter asserted. "I have repeatedly expressed my commitment to working with the Congress to pass a bipartisan authorization for the use of military force (AUMF) against ISIL."

In other words, Obama is asking Congress to rubber stamp another open-ended AUMF -- in terms of geography and target, if not time -- even while asserting he won't be limited by it. So long as that earlier AUMF is still on the books, Obama can point to it if he wants to expand the scope of this one.

Those who seek to limit Executive authority would be nuts to pass such an authorization.

Indeed, there are already signs of dissent from Democrats. "[W]e must [pass an authorization] in a way that avoids repeating the missteps of the past, and that does not result in an open-ended authorization that becomes legal justification for future actions against unknown enemies, in unknown places, at unknown times,” Senator Pat Leahy reacted, recalling how the 2001 AUMF had been used to authorized indefinite detention and drone strikes far from the battlefield.

That may be part of the point. Republicans have already objected to the one biggest limit in the AUMF, its promise not to use "enduring" ground troops, which hardliners think are needed. "If we're going to authorize use of military force, the president should have all the tools necessary to win the fight that we're in," John Boehner told the National Journal and other reporters.

Which may mean such a bill will not pass Congress. Even as Republicans are squealing about what they claim is a presidential power grab on immigration, they appear content with this particular power grab -- particularly if the President will bear responsibility for any big reverses in this war.

Heads or tails, we're likely to still end up with claims to fairly unlimited Presidential authority to wage war.