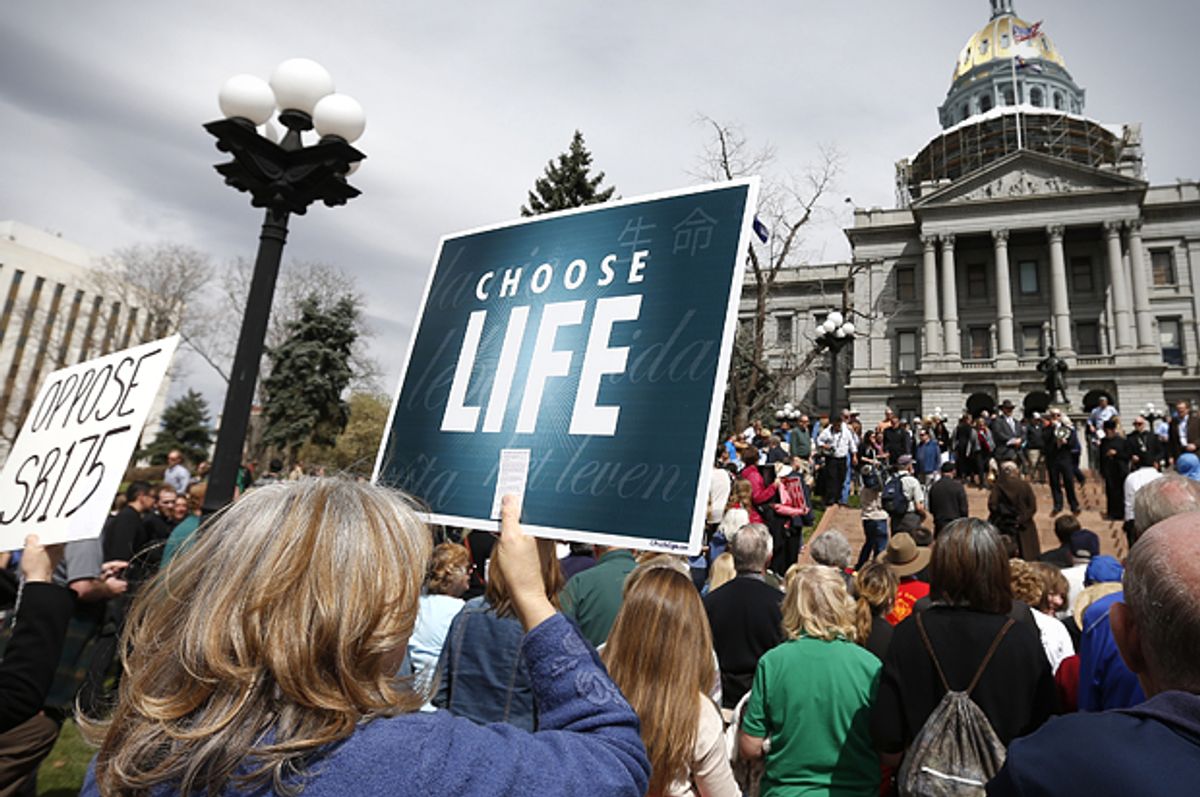 Can the opponents of reproductive choice please stop resorting to underhanded, manipulative tactics to try to frighten women out of having abortions already? Can they stop acting like if they can just upset women enough, they've won a moral victory? Case in point: The showdown this week at the University of Central Florida over graphic abortion imagery.

The provocatively named "Genocide Awareness Project" from the Center of Bio-Ethical Reform is currently making its seventh visit to the campus this week, positioning itself near the campus reflecting pond, in front of the library, with a display that includes photographs from abortions. The group is also passing out literature and engaging in "discussions and debates" with students. Fletcher Armstrong, the group's national field director, promised the Orlando Sentinel Sunday that "You see arms pulled off, decapitation, dismemberment, that's what you see…. Frankly, it's hard to show. But if we don't show it, people don't get it." And just to make a point, in addition to vivid images of aborted fetuses, the displays also feature images of dead bodies from the 1994 Rwandan genocide. Armstrong estimates that "an average of five to 15 percent" of visitors who participate in the group's opinion poll wind up changing their minds on the issue, though he says that figure is "not scientific."

The bloody fetus strategy has a subtler, but also emotionally manipulative cousin in the "informed consent" rules like the one being mulled in Missouri this month – which would require women seeking abortions to watch an "informational" video about the procedure. And the tactic of showing, as graphically as possible, the results of abortion remains the same. It's designed to incite a strong reaction – and sometimes, unfortunately, it works. Last year, a group called Survivors of the Abortion Holocaust – another Christian group known for its deployment of "overwhelmingly bloody and gory pictures," brought its campaign to the University of California at Santa Barbara. It was a visit that culminated in a heated exchange between the visitors and feminist professor Dr. Mireille Miller-Young, one in which Dr. Miller-Young came away looking like the aggressor, and the protestors were embraced by the right wing media as victims of an "attack."

I'm all for patients being prepared before any medical procedure. But let's not kid ourselves – that's the job of healthcare providers, not of a group that declares that "A woman has the right to decide whether to become pregnant." But hey, if you want bring up the tragedies of Rwanda in your rhetoric, you might want to look into the mass rapes committed during the genocide, and consider how much deciding those women got to do about their pregnancies. If you want to talk about women's choices, you might want to consider not just sexual violence against them but their access to safe, reliable birth control. As Anna Eskamani, a director of external affairs for Planned Parenthood reminds, "If those who oppose safe and legal access to abortion were truly committed to reducing the number of unintended pregnancies and improving community health, they would work with Planned Parenthood to increase access to affordable birth control, cancer screenings and gynecological care."

And if your organization really believe strong visuals tell a story, perhaps then you've heard of Gerri Santoro. In the early 70s, a coroner's photograph of her dead body, nude and bloody after a botched abortion, became a lightning rod for the pro-choice movement. Or maybe you'd like to see photographs of the women around the world who continue to contribute to the shockingly high rate of maternal mortality thanks to illegal and unsafe abortions. Or perhaps you'd like to see some pictures of women like Savita Halappanavar, women who died in agony because they were refused lifesaving procedures when their planned, wanted, pregnancies weren't even viable any more.

What the anti choice movement does, again and again and again, is presume to know exactly why a woman might seek an abortion and to presume that that reason is not sufficiently compelling. It ignores the circumstances of her pregnancy, her health, her age, and most of all, her personal, singular reasons. It tells women who support choice that they're selfish and bad and deserve to have graphic, bloody photographs shoved in their faces. It takes their distress as some kind of proof that their tactics are justified. That's not dialogue. It's not debate. It's not free speech. It's bullying and intimidation. It's a horror show.