Her early hits were about boy trouble, but she's remembered for her anthems of empowerment 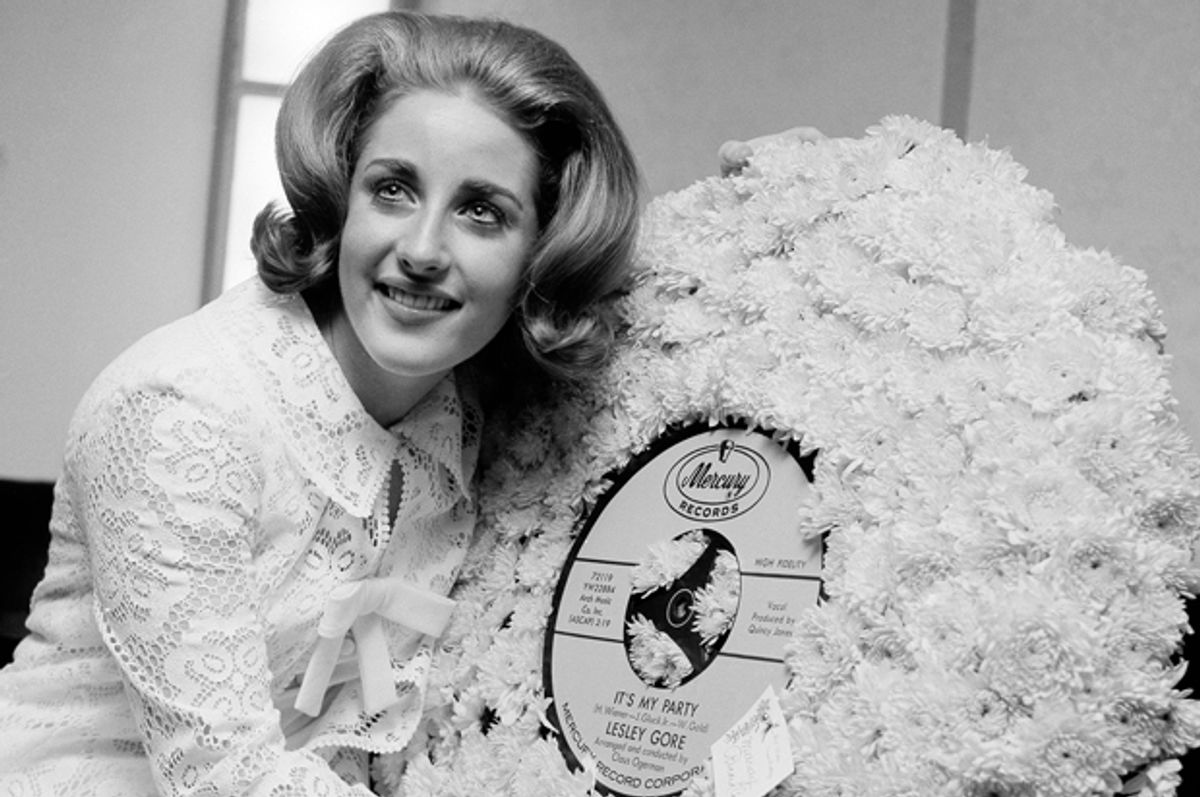 For a singer for whose biggest moment in the spotlight came over fifty years ago, Lesley Gore, who died in New York this weekend at age 68, nonetheless remained an eternal icon of empowerment to generations of girls and women. A champion of reproductive rights, an openly gay woman whose partner of 33 years announced her death, it was always her party.

Gore was still in her teens when her Quincy Jones produced "It's My Party" – a pop drama of romantic betrayal at a birthday celebration – became a Grammy nominated Billboard chart topper. Although the song's message would quickly undermined by her follow-up "Judy's Turn to Cry," the original nonetheless stands out as an enduring, defiant argument against the stiff upper lip. Even people who've never heard the song know the title; thanks to Gore's classic rendering of it, and it's entered the lexicon as the shorthand for that moment you decide it all sucks and you're through pretending otherwise.

Gore was never the kind of beehived and eyelinered bad girl that groups like the Ronettes popularized, nor did she become as successful a songwriter as the great Ellie Greenwich. And some of her early hits, like the thoroughly bananas odes to being a doormat like "That's the Way Boys Are" (written by, shocker, two men) and "Maybe I Know"  -- won't turn up on playlist of feminist power jams. But it's no accident that at the age of 17, she was already best known for the torchy "You Don't Own Me," (written by, as a matter of fact, two men as well) a slow burn litany of everything the song's fed up narrator is not and will not stand for. A generation later, in 1980, she and her brother Michael were nominated for an Oscar for "Out Here on My Own," from "Fame," a song that proved she could still channel youthful anguish and desire.

Gore officially came out in 2005, releasing a comeback album and hosting episodes of the PBS LGBT series "In the Life." But it's notable that she said at the time she'd never gone to great lengths to conceal her identity. "Times were very different then, so, you know, I just tried to live as normally as humanly possible, but as truthfully as humanly possible."

But Gore always considered "You Don't Own Me" her signature song, and in 2002, she told Digital Interviews, "After some 40 years, I still close my show with that song because I can’t find anything stronger, to be honest with you. It’s a song that just kind of grows every time you do it. It might mean one thing one year and boom, two years later, boy, it can mean something else." It's been used as a bonding moment in "The First Wives' Club," a possessed nun's sultry kiss off to a crucifix in "American Horror Story," and, in 2012, a Lesley Gore-approved, all-star PSA encouraging women to get out and vote. Though her New York Times obit recalls her as the "teenage voice of heartbreak," generations of listeners, and in particular women, recall her as something else – the lady who gave voice to the idea a woman isn't anybody's else's trophy. It's a message that still needs restating on a near constant basis. And now that Gore's gone and her party is over, the rest of us will just have to keep singing it.