Yes, he starred in a new movie. But that doesn't mean he wants to talk to us about it 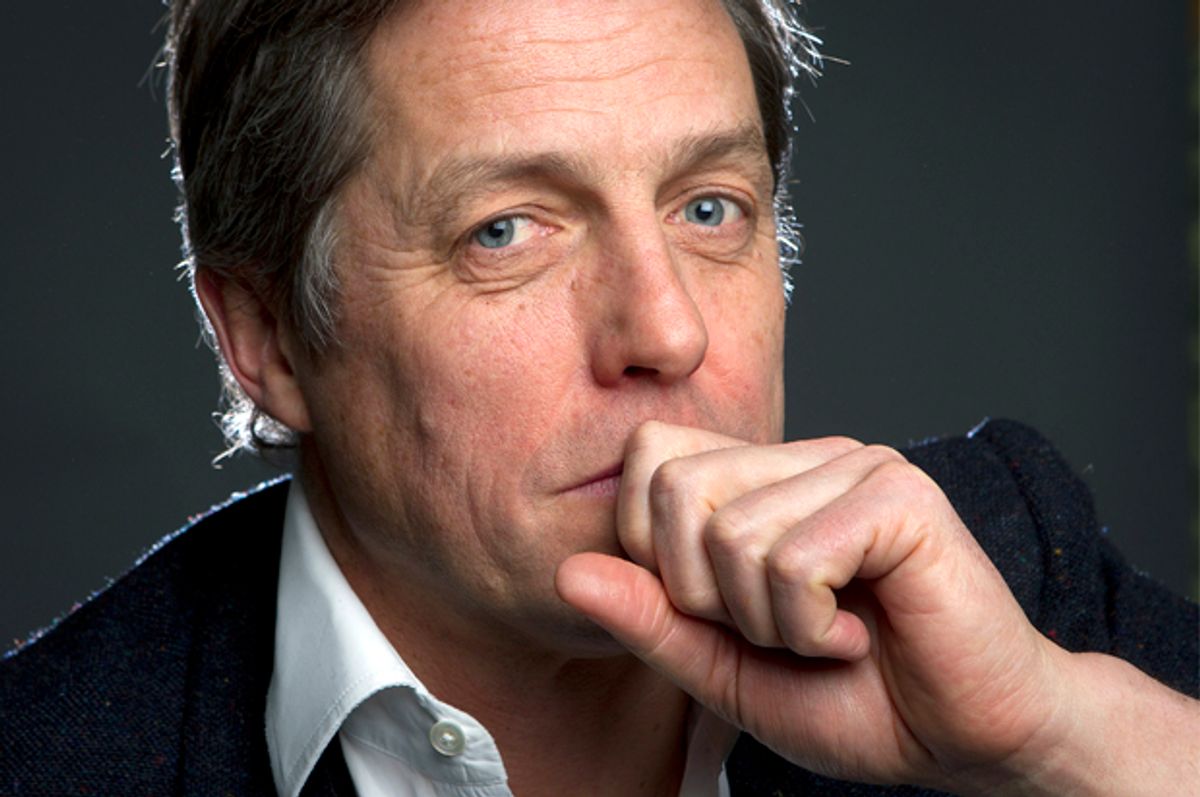 Hugh Grant is a known curmudgeon, a notoriously prickly interview subject who has repeatedly said that he hates being a celebrity and yet continues to act in the occasional film, which obliges him to then speak to reporters where he often reveals how little he enjoys his job, or at least the publicity part of it. This is the guy Jon Stewart named as his least favorite “Daily Show” guest of all time.

In a 2012 profile by The Guardian, Grant is described like this:

"He scans every question like a bomb disposal expert, only ever meeting my gaze at the end of an answer, when he throws a dead stare to say that's as far as he'll go. Compliments are received with all the enthusiasm of a minnow accepting chocolates from a shark, and silences left to linger in the air. Needless to say, I become increasingly shrill, rushing to fill them with inane babble, which elicits only introspective "Hmm"s and gloomy "Mmm"s."

I had been given one of the very last interview slots amid a very long day of press appearances for Grant's new project "The Rewrite," Marc Lawrence's film about a once-beloved Hollywood screenwriter who takes a job as a professor and falls for a single mom in one of his classes (Marisa Tomei). Grant was exhausted by the time my turn came. And I, who was practically raised on his greatest hits -- “About a Boy," "Four Weddings and a Funeral" and “Love Actually” -- went into this interview more nervous than I normally would be at the prospect of meeting England’s ur-gentleman (and one of my childhood heroes) in the flesh.

I managed to inadvertently offend him pretty much right off the bat, and neither of us were able to re-establish a rapport. Grant's trademark on-screen charm and wit turned to palpable disinterest, the conversation meandered, and I became increasingly flustered as he met my questions with one-line answers and foreboding silence.

I don’t think it is a rom-com. It has a little bit of that in it, but I think it’s more interesting than that. It’s really about a guy whose needs hold new direction and one comes upon him out of left field and I liked that. I liked the whole comedy of sort of failure, which is what propels a lot of it in the first half. I love Marc’s films and his sort of outlook on life. He likes people in the way that I don’t. I found it all quite charming and uplifting.

You’ve said before that you’re a bit tired of stardom and that you wanted to step out of the limelight a bit, but you haven’t. Is there some reason that you keep taking movies and doing projects like this?

Well, I have stepped out quite a bit. I’ve barely made a film for a few years. A little bit in "Cloud Atlas," a little bit “The Man from U.N.C.L.E,” but otherwise really almost nothing, because I got completely sidetracked by this political campaign. Much to my surprise, it’s my full-time occupation. I would say I am out of the film business largely.

But you’re working on a movie with Meryl Streep.

I am going to do that in May, yes.

Have you guys started any of the shooting yet?

Are you excited to work together? Have you worked with her before?

I’ve never worked with her and I’m terrified.

Yeah, she's amazing. So you’ve been working on this political campaign about hacking. How has all the stuff that’s been going on with Sony and with the nude photo hacks this summer resonated with you personally?

It’s an entirely different issue, that is. It’s not related to what we’re campaigning for in Britain at all. Ours has to do with the abuse for profit of very vulnerable people who've lost kids in car accidents and terrorist incidents. It has nothing to do with Sony.

Ah. I don’t know why I thought it was related. So are you a fan of romantic comedies or romantic films in general?

Not particularly. I have no idea why I ended up making so many romantic comedies. That was never a genre that I was naturally drawn to as a cinema-goer.

I think Russell Davies said that you’ve sort of "infected fiction" in that men in dramas nowadays can't not play the role that you played in "Four Weddings and a Funeral." And that every time you turn on the TV it’s someone playing some variation of the role you played in that film.

Well I’ve not noticed that.

Were you aware of any of the “Love Actually" backlash or anything that surrounded the conversation about that lately?

I didn’t know there was one.

There’s been a very heated debate online with a very strong pro-"Love Actually" camp and anti-"Love Actually camp" that has flared up in recent years. Do you have fond thoughts of the film now at this point?

God, I haven’t seen it probably since it came out, so I don’t know. I feel fondly towards any film that did really well. But I’ve not been part of that. I didn’t know there was a big thing online.

How similar are you the character that you played in "The Rewrite"? He seems quite world-weary and it feels to me that there are some meta-elements to the character taking this job that he really doesn’t want to take.

Did you enjoy the return to sort of a collegiate environment? I know you recently did a screening at Binghamton University.

Look, I did enjoy working with those young actors who played my students, because they were really keen and really good and I had a laugh with them. Something about teaching is curiously attractive actually. I don’t know what it is. My mother was a teacher. I felt quite good standing up there at the front of the class.

I suppose there might be an ego-trip to be had in that.

Have you ever thought about writing a screenplay, like your character? At this point, you must have a lot of experience with the form.

Yes, that’s right. I keep thinking that is exactly what I should be doing, but I’m so unbelievably busy with politics and with three young children that I don’t really have time for anything else.

Tell me a bit about your political campaign. I don’t know why I thought you’d been doing some activism to do with privacy and security. Is this something different?

That has to do with security, no. It has do with privacy, but not the privacy of celebrities. It has to do with the privacy of people who have had their children murdered or had their brother killed in the war in Afghanistan, or mother blown up in a terrorist attack, who have been very badly exploited by certain parts of the British press for profit. That’s always been allowed to happen in Britain because everyone’s so scared of these newspapers because they have the power to destroy you. They’re very ruthless and politicians have been too scared to tackle them because the papers are regarded as powerful enough to get them elected or unelected. For the first time there’s a sort of organization which represents the victims of the worst press abuse. We’ve managed to get a new goal in place.

Are you enjoying your political life? Is this something you can see yourself doing more expansively?

Well, I would quite like this campaign to come to an end soon. It’s been three years of a really hard slog against a very scary enemy. It actually has been really uplifting in some ways because I live the people I’m doing it with. It’s a great camaraderie and also it’s very fascinating. The issues that come up are genuinely interesting and I’m working with a lot of very bright people. It’s really nice to be out of show business and doing something different.

And I read that you have also been working in theater with some actors with learning disabilities.

I did do that a while ago. One of our supporters in the campaign is a lady whose son has a learning disability. He persuaded me to — we wrote a book together for people with learning disabilities and then we acted out the play with his group of actors.

Apart from the sort of tiresome aspects of some parts of show business, do you still enjoy the acting part of the craft?

Fair enough. Even in the theater setting?

Theater has always been much more fun. You get a laugh and it’s really encouraging.

Getting a laugh is always good. So you’re doing this dramatic biopic with Meryl Streep. Do you see yourself gravitating to more serious roles at this point?

The role in the film with Meryl Streep is fairly different from anything I’ve ever had to do before. That’s part of what’s scary about it.

This woman, Florence Foster Jenkins had a 40-year relationship with a man who was younger than her and was a sort of failed British actor. He’s a very interesting character because he genuinely loves her. I’m about to give all sorts of spoilers, but he’s highly complicated and whenever I think I am doing something that’s a departure, everyone else just says you’re being the same old Hugh Grant. I gave up on trying to be different years ago.

It could be worse. People really like your movies.

You often play characters who are not particularly nice to women, especially in this film. Early on, you go on a really heated sexist tirade to Alison Janney’s character. And yet you've remained something of a heartthrob even though your characters always say and do some not very nice things.

I guess sometimes women like men who aren’t very nice to them.