Mitch McConnell, "fixer" no more: Why we're headed to another (partial) shutdown 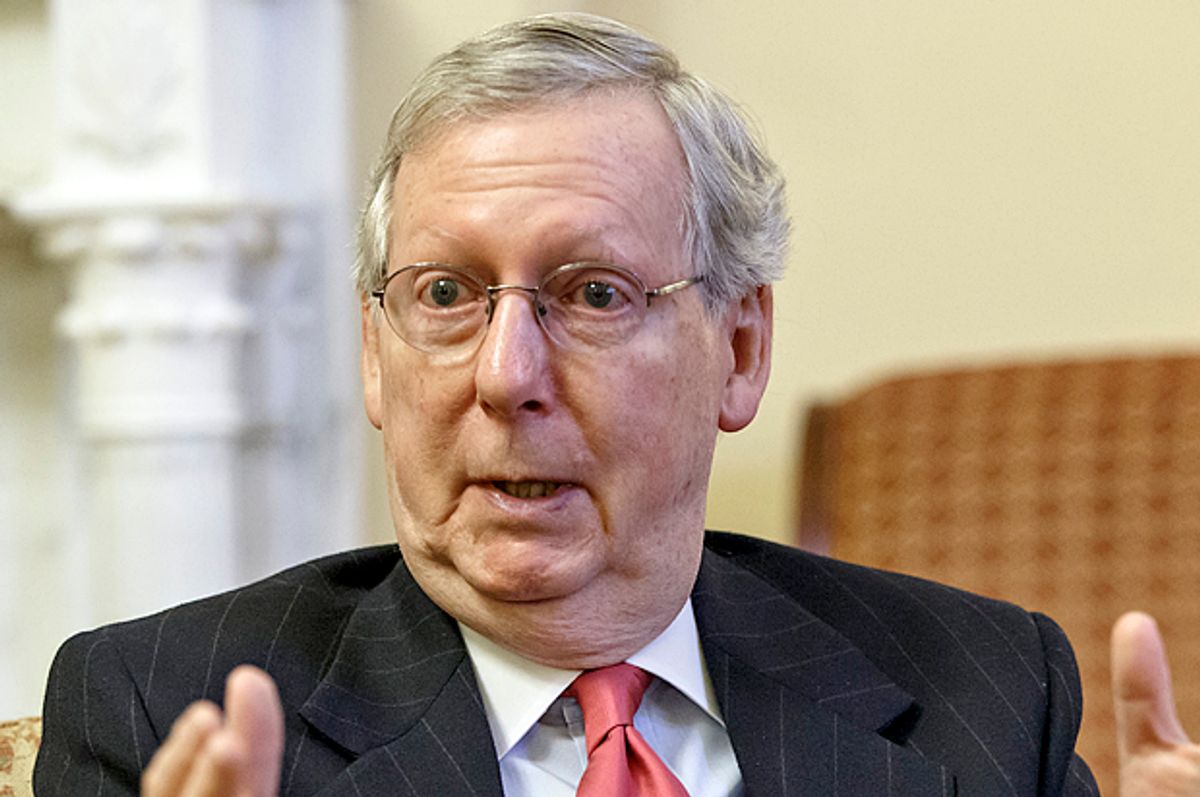 The play right now to get through this DHS impasse is straightforward: Mitch McConnell needs to announce his support for a "clean" appropriations bill, which would easily pass the Senate, and then jam John Boehner into passing such a measure through the House on the back of mostly Democratic votes. McConnell has done this before, playing fixer -- i.e., selling out Boehner -- on several of the budget/debt ceiling crises of the past four years.

But now, of course, McConnell is the majority leader -- the face of the Senate, the figure who brings up bills. It was much easier for him to escape the brunt of right-wing outrage when all he had to do was quietly agree to not filibuster something. Now, if he sells out Boehner, there will be no hiding or massaging that fact. He will be the spineless, ball-less, weak-stomached RINO establishment monster who allowed King Obama's imperial executive amnesty to proliferate (even though it's on pause right now.)

Consider how McConnell has responded to the injunction on Obama's new deportation deferral programs. As we wrote yesterday, the injunction opened up the possibility of an "escape hatch" for Republican leaders. They could make the argument that, since the courts were taking care of Obama's executive actions, they could go ahead and fund DHS sans any contentious riders. This is the sort of argument that McConnell the Fixer could cotton to. But it's also an argument that would make him, the Senate majority leader, enemy number one among conservatives.

And so McConnell has, for now, contorted himself even more snugly into that corner of his:

McConnell on Tuesday used a judge’s injunction against Obama’s immigration order to increase the pressure on Democrats, saying the onus is on them to stop filibustering legislation that would fund the DHS and stop an illegal power grab by the White House.

“Senate Democrats — especially those who’ve voiced opposition to the President’s executive overreach — should end their partisan filibuster of Department of Homeland Security funding,” McConnell said in a statement.

McConnell could have seized on the injunction to push conservatives toward funding the DHS while the court fight plays out. The fact that he didn’t, Senate Democrats say, is a sign that McConnell won’t be coming to the negotiating table.

“He certainly has not looked that way thus far,” said a senior Democratic aide. “He could have said, ‘This issue is being discussed in the courts; that’s the appropriate venue. Let’s keep the fight there and fund DHS in the meantime.’

“He cares more about scoring points with the hard right of his caucus than doing the right thing,” the aide said.

Unless McConnell changes his mind, there will be a partial shutdown. He seems to have accepted this and is preparing his spin accordingly. For example: it would not violate his pledge that there "will be no government shutdowns"... if it's only one department that's getting shut down? Have fun with that.

McConnell, like Boehner, will try to pin public blame on the Senate Democrats who are filibustering the House-passed DHS bill. The public likely won't go for this, and will blame Republicans, for a couple of reasons.

One, this is another example of congressional Republicans holding government funding hostage over a far-right goal. There is nothing wrong with holding government funding hostage per se -- Congress is allowed to do this! -- but you'd better have an important reason for it, something that a broad-based segment of the populace agrees is an emergency situation. Most people are not rioting in the streets over a programs offering temporary deportation relief from the threat of deportation to certain classes of undocumented immigrants.

The other reason people won't blame Democrats for a shutdown... well, just look at this quote from McConnell's spokesperson:

Don Stewart, McConnell’s spokesman, said his boss has few options as long as Democrats refuse to allow a House-passed funding bill to come up for debate. He said it is up to Obama, not McConnell, to break the impasse.

“If Democrats won’t let us get on any bill, there’s nothing anyone can do. It’s in the president’s interest to fund the Department of Homeland Security. Maybe the president will engage his party and have them have this debate,” he said.

The argument that they're preparing to make to the public is: The Democratic minority in the Senate is preventing the chamber from reaching cloture on a motion to proceed to debate and amendment on an appropriations bill. Or to use Don Stewart's insider term, they won't "let us get on any bill." (That's not true, by the way; they will absolutely let the Senate "get on" a bill that doesn't include riders undoing two of President Obama's signature programs.)

This highly procedural explanation for the workings of Capitol Hill will not work, and for that, Mitch McConnell has only himself to thank. His reign as minority leader offered plenty of data points showing that a Senate minority can filibuster everything and not take any of the blame, because most people don't know what the hell that even means. Blaming the parliamentary tactics of the Senate Democratic minority will be just about as effective as blaming the parliamentary tactics of the Senate Republican minority, which is to say not very effective at all.