"American Sniper" is not a war movie: It's a classic revisionist western, and one of Eastwood's finest

Like all revisionist westerns, the film is actually a subtle critique on frontier justice and hypermasculinity 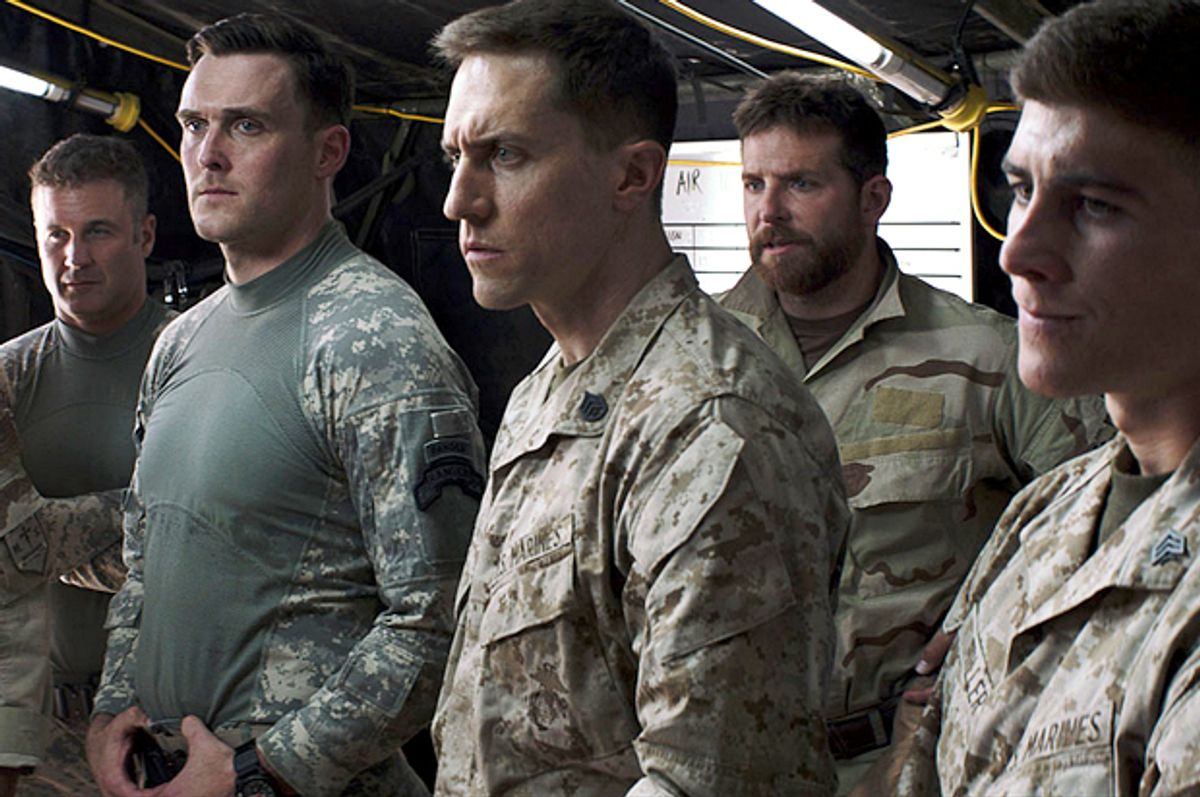 In a recent interview with Terry Gross, Bradley Cooper described how he and screenwriter Jason Hall initially envisioned “American Sniper” as a revisionist western. “The idea was to have a construct of a western, but play with it a bit in the way that 'Unforgiven' did, you know?…I like that idea of playing with these archetypes.” But, Cooper goes on to say, after Chris Kyle was murdered, Hall decided that Kyle’s death demanded that he tell a more authentic story, a story more focused on the relationship between Kyle and his wife, Taya, and one that would narrate Kyle’s “experience going four tours and the schizophrenic nature, almost, of going from home to war.”

Ironically, what Cooper described as a complete transformation in the film’s framing ended up deepening the film’s ties to the western genre.  Like so many westerns, "American Sniper" revolves around the tensions between a hypermasculine hero, who only feels at home on the frontier of “civilization and savagery,” and a heroine who embodies domesticity.  Like so many westerns, it has been defended and attacked on the basis of the authenticity (or lack thereof) of its representations of a distant “frontier.”

From Taya Kyle’s repeated testimony at the film’s promotional events proclaiming that the film is like “seeing Chris again,” to former SEALs criticizing the film’s failure to represent Kyle using a rifle scope cover, there is a remarkable consensus around the idea that what the film should be is a documentary account. Understanding the film in these terms has polarized the country along familiar lines, as those who believe that Chris Kyle was a hero and the Iraq War was on balance a good thing sit in the front row and cheer, while those who believe neither of those things sit in the back row and snark at the film and those who enjoy it.

Similar intractable debates over authenticity have defined America’s obsession with westerns ranging from “The Virginian” to “Deadwood.” Understanding the political work that westerns do, however, requires us to think beyond such disputes over realism. Understanding “American Sniper” as a western that plays with the archetypes (as Cooper said) of that genre reveals a political allegory that tells us more about the relationship between American liberalism and the violent ideology of men like Kyle than many commentators on either side of our familiar political divides want to hear.

The aspects of “American Sniper” that conform to western archetypes are easily recognizable. As a young man, Kyle is portrayed as adrift, an ersatz cowboy whose exploits on the rodeo circuit fail to secure the fidelity of a girlfriend who cheats on him while he is on the road. Having failed to realize his dreams of frontier masculinity as a rodeo cowboy, Kyle turns to the military. He is trained and deployed to “the new wild West in the old Middle East,” where he is able to realize his true calling as a latter-day western lawman, serving as the lone wolf representative of the civilization whose sovereign violence he embodies.  His trials on the frontier are allegorized by a confrontation with a villain who shares his capacity for killing but not his humanity: “Mustafa,” who, as many commentators have noted, is represented not so much as a character but as an embodiment of the “savagery” Kyle strives to eliminate.

Kyle’s frontier masculinity is threatened not only by the violence of the “savage,” but also by the feminine domesticity of his wife, whom he marries on the same day that he gets his orders to deploy. In his trips home between tours, Taya, who needs Kyle at home to raise their children, pleads for his return.  Kyle defies his wife and returns to Iraq for a fourth tour, during which he kills Mustafa in a long-range, “High-Noon”-style shootout. It is only then that, by his own choice, he returns home to begin the process of reintegrating himself into the “civilized” life he had been working to protect.

If “American Sniper” was a film with “no nuance, no context and no subtlety,” as Sophia McClennen described it recently in Salon, that would be the end of the story. But Hall’s script, Eastwood’s direction and Cooper’s masterful performance give us a film that accomplishes much more than the failed biopic so many critics have described.

In the tradition of the greatest westerns, from “The Searchers” to “Unforgiven,” “American Sniper” offers up its familiar western narrative not as a triumphalist myth but as a disturbing object for contemplation and critique. The film’s point of view cleaves to Kyle’s in such a way that it both immerses its viewers in his Manichaean worldview and, at crucial moments, alienates us from it. From the violence that is visually foregrounded in the now infamous “sheepdog” scene until the shot that foreshadows Kyle’s murder, “American Sniper” tells a story of a man who is unable to insulate his family or his homeland from the violence of the war he is fighting. Like John Wayne’s character, Ethan, in “The Searchers,” his own character is under threat of being overtaken by the very savage violence he set out to quell.

The film’s final act offers a clear counterpoint to those who argue that the film constitutes what Chris Hedges called a “tawdry commercial for the crimes of empire.” In a western that affirms the value of frontier violence, the hero’s triumph in the final shootout ought to stand as a concluding act of lawmaking violence. The defeat of the villain should usher in the closing of the frontier, a historical transformation symbolized by the union of the frontier hero with the metropolitan woman.  While Chris is reunited with Taya, the circumstances of this reunion are hardly triumphant. In the film’s allegorical climax, Kyle eliminates a sniper who is preventing the construction of a wall literally intended to contain the violence of Sadr City. While he defeats Mustafa, his success proves a Pyrrhic victory: Only moments after his successful shot, his firing position is overrun by enemy forces and a massive sandstorm engulfs the city.  Instead of reaffirming his masculine authority, the violence of the shootout unmans him, leaving him sobbing on the phone to Taya and stumbling blindly through the Iraqi streets that he leaves more chaotic than he found them.

In the subsequent scenes of his postwar life, we are offered no clear sense that Kyle has mastered the anomic violence that overtakes him in Iraq. The film’s disturbing and underconsidered penultimate scene highlights Kyle’s cowboy self-image in order to ask disquieting questions about the efficacy of his attempted reintegration into civilian life. In a sequence that plays off anxieties regarding the high rate of domestic violence among returning combat veterans, Kyle is featured picking up a revolver in his bedroom and stalking past his children toward the kitchen of his home. As he pulls back the six-shooter’s hammer, the audience has to assume the worst until Kyle opens his mouth and, in a cartoonish cowboy drawl, demands that his “little lady” “drop [her] drawers.” Any solace delivered by this play-acted rape threat is dispelled when Kyle, on his way out the door to meet the troubled veteran who will kill him at a local shooting range, casually leaves his revolver on the counter in a houseful of children.

“American Sniper’s" harshest critics have neglected the nuances of its plot and camera work in order to discredit the film’s humanization of Kyle. They have largely done so by focusing on the divergence between the Kyle of the film and the Kyle of the ghostwritten memoir.  Where Cooper’s performance as Kyle depicts a man tortured by the violence he inflicts, the memoir portrays a man secure in his disdain for the “savages” he kills. That these critiques treat a carefully engineered Harper Collins bestseller as an authentic account of its putative author’s inner life is rather remarkable.  But even if the film portrayed Kyle’s inner life as more troubled than it actually was, Cooper’s humanization of Kyle does political work that expands the scope of the film’s political critique rather than detracting from it.  Many of the film’s critics have succumbed to the temptation to imagine Kyle as not only ideologically but categorically different. In an ironic redeployment of his own Manichaean worldview, these critiques cast Kyle himself as the inhuman savage that civilization must defend itself against.

One of the western genre’s most enduring lessons, however, is that American liberalism depends on the frontier violence of men like Kyle in ways that liberals would like to forget. Cooper’s visceral physical performance portrays Kyle as wracked by the emotional responses that those of us who have never been on the front lines can identify with, even as he delivers lines so racist that we recoil against them. In its deliberate collision of liberal humanism with frontier violence, “American Sniper” is reminiscent of one of the most brilliant revisionist westerns ever made – John Ford’s “The Man Who Shot Liberty Valance.”

In the climactic shootout in Ford’s film, lawyer Ransom Stoddard (Jimmy Stewart), the film’s representative of liberalism, reluctantly, and only after legal avenues had failed, kills the vaguely ethnic outlaw “Liberty Valance” (Lee Marvin).  By ending Valance’s reign of terror in the frontier settlement of “Shinbone,” Stoddard facilitates the transition of “the territory” to statehood, and also wins the affections of Hallie (Vera Miles), the figure of feminine domesticity, away from rancher Tom Doniphon (John Wayne) who embodies the violent and racist values of the frontier that Stoddard’s liberalism seeks to overcome.

The problem, we learn in one of the film’s final scenes, is that it wasn’t Stoddard who killed Valance at all. As Stoddard fired off an inept shot at Valance in the thoroughfare, Doniphon, lurking in the shadows, fired a simultaneous and lethal shot with his rifle.

In the film’s famous conclusion, Stoddard (at this point in the film’s chronology, a U.S. senator and Hallie’s husband) confesses the truth in a report to the Shinbone paper. The paper editor refuses to publish the story, declaring as he is tearing up his notes that “this is the West sir. When the legend becomes fact, you print the legend.”

In metaphorically refusing to “print the legend,” “The Man Who Shot Liberty Valance” forces us to grapple with the secret complicity between American liberalism and the racist violence of the frontiersman. In a representation of “The Legend” Chris Kyle that draws liberal viewers closer to his worldview than they feel comfortable being, “American Sniper” does the same thing.

The tragedies perpetrated and experienced by men like Kyle are not a conservative problem; they are an American problem. In one of the more insightful criticisms of “American Sniper,” Lakota/Dakota scholar James Fenelon argues that Kyle’s invocation savagery to describe his enemies cannot be understood as an invention of neoconservatism. The imagination of a category of human beyond the limits of reason, “the unreconstructed Other that needs to be obliterated,” enabled the violence that facilitated the settlement of the territorial United States long before it enabled American militarism abroad.

This ideological continuity between Westward expansion and the “Global War on Terror” means that the western still provides an apt form for exploring the contradictory relationship between American “civilization” and its violent “frontiers.” In condemning westerns like “American Sniper” rather than the ongoing political realities that drive their appeal, critics mistake a symptom for a cause.

Alex Trimble Young is the Beaumont PhD Fellow at the University of Southern California, where he is completing a dissertation on dissent and the settler colonial imaginary in post-1945 US literature. His other recent work on the politics of the Western can be found in Western American Literature and Settler Colonial Studies.