Dear Norm Macdonald and Eddie Murphy: A Bill Cosby SNL joke is anything but "kicking a man while he's down" 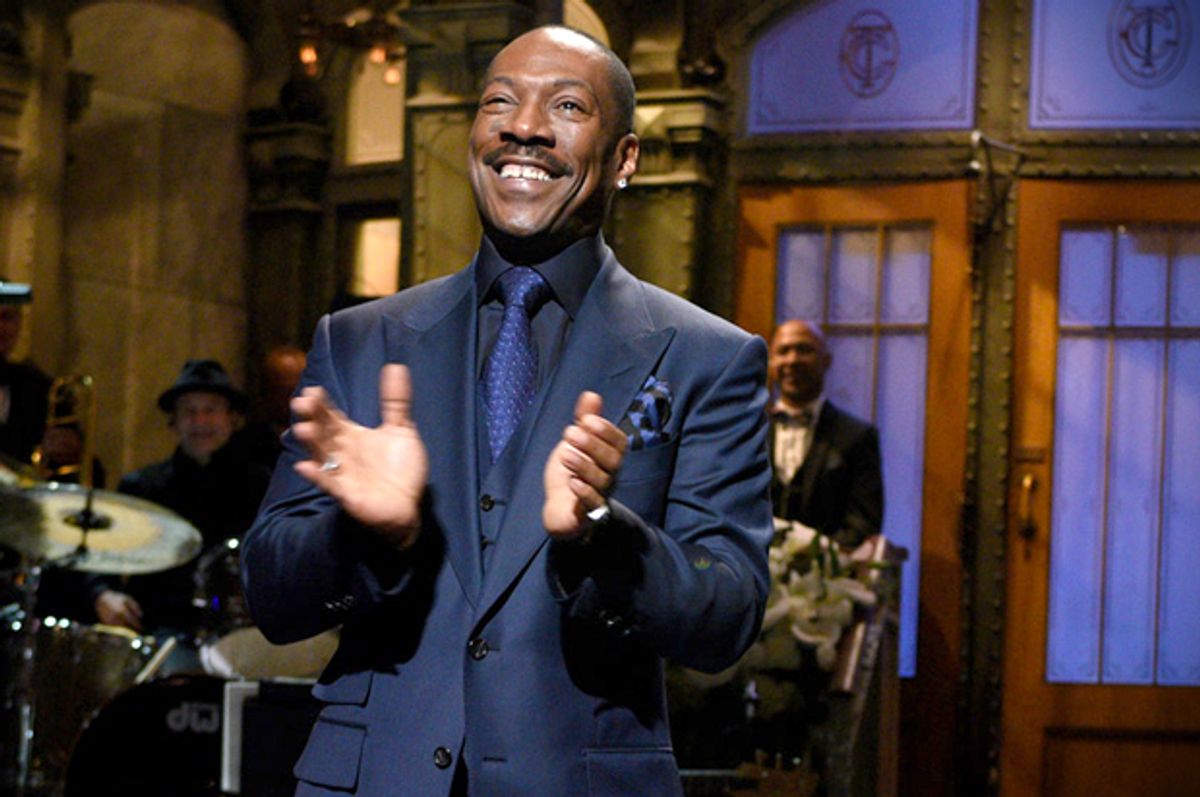 Poor, poor Bill Cosby. A man still able to draw crowds to his live shows, where he casually jokes to "Be careful about drinking around me." A man recently feted with an exhibition at The National Museum of African Art. A millionaire many times over. Poor, poor Bill Cosby. It's so hurtful that more than two dozen women have accused him of sexually assaulting them. What a difficult time this must be for him. How fortunate there are other men in the world with the integrity to not "kick him when he's down."

In an illuminating glimpse backstage into the recent "SNL 40" celebration, comic Norm McDonald Wednesday described what it was like to hang out with Paul McCartney and Sarah Palin – and revealed the Eddie Murphy Bill Cosby bit that never was. As McDonald recalled it on Twitter, the original idea was to have Murphy part of the "Celebrity Jeopardy!" sketch. As he explained, writer Steve Higgins had "an idea that would blow the show wide open." He said, "The category would be potent potables, a common one on Jeopardy, but one we somehow had never done. And the idea was that it would be a bar set. And the idea was that Cosby would be mixing a drink in a video that was taped 6 months ago…. The iconic doors would open and on to home base would step Eddie Murphy. The audience would know what to do. Why is Eddie wearing a multi-colored sweater? He steps behind the bar, begins mixing a drink. The audience covers the fact he has not spoken. When he speaks, he is Cosby. Eddie Murphy doing a perfect Cosby impression. The audience does not let him finish. The sketch ends." That was the plan, anyway. Eventually, he says, it was "my job to talk [Murphy] into doing Jeopardy. We talk in his dressing room a good hour. When it's over, I'm convinced he'll do it. He doesn't. He knew the laughs would bring the house down. Eddie Murphy knows what will work on SNL better than any one. Eddie decides the laughs are not worth it. He will not kick a man when he is down." It was a sentiment quickly echoed by Piers Morgan, who assented, "Something very admirable, too, about Eddie Murphy not wanting to kick Bill Cosby when he's down - given their history."

Murphy, who instead opted to bask woodenly on the "SNL" stage for a few moments doing next to nothing, does have a bit of history with Cosby. Early in his career, he made devastating mockery of the man after Cosby had "chastised me on the phone for being too dirty on the stage." McDonald, meanwhile, long ago opened for Cosby, and last year called him "very funny and nice also." And Piers Morgan has his own, more recent track record with the comic. Just last month, in a conversation with Meredith Viera, "How many [women] have there been? Twenty-five? Thirty? All saying exactly the same thing. All describing a very similar pattern of drug and sex-related abuse by one of America's biggest stars, and I don’t think it's conscionable for anyone right now to be employing Bill Cosby while these allegations remain unresolved…. Most of these women have no connection to each other and yet they are describing exactly the same pattern of abuse, and when that happens, most police will tell you, it’s not just smoke without fire, there has been abuse." And he addressed Phylicia Rashad's support for her former TV husband, saying, "She’s entitled to [defend him] and I’m entitled to find that reprehensible."

Eddie Murphy certainly has every right to decide what material he wants to do, and whether or not to make his first "SNL" related appearance in decades a showstopping gag about rape allegations. (A version of the joke, with Kenan Thompson as Cosby, did make it to air.) Only McDonald and Murphy know for certain what they spoke about in their conversation, and in the end, perhaps it was generally agreed that Murphy doing a Cosby joke would have the wrong tone in a show meant to celebrate the show itself, not push new buttons. But I wonder what it was like last week in the hallways of "SNL," and how other veterans felt about Murphy backing off on Cosby.

Six years ago, in an episode of "30 Rock" called "The Bubble," a character pretending to be Bill Cosby on a phone call with Tracy incites his wrath. "You got a lotta nerve getting on the phone with me," Tracy says, "after what you did to my Aunt Paulette!" On the DVD commentary track with Jack McBrayer and Jon Hamm, McBrayer jovially notes the line and says, "We're dancing around a fine line here, because you know there's always some truth in comedy. It's up to the viewer to decide." Tina Fey wrote that episode. The same Tina Fey who a month ago was fearlessly trading Cosby jokes with her former "SNL" costar Amy Poehler, blustering, "I put the pills in the people! The people didn’t want the pills in them!" And as far as I'm concerned, I'm all for reminding the world exactly what Bill Cosby has been accused of, into infinity.

You decide a joke isn't working or you don't want to do it, well, that's a call comics make all the time. But if you want to say out loud to the world that Murphy's choice was somehow brave or compassionate, you are missing the point from a comedic and plan old human being point of view. Bill Cosby is a man who settled a lawsuit with a woman who said he sexually assaulted her in his home, a man who has been accused of similar acts on multiple women, over decades of his career. You don't want to do a bit, don't do a bit, but don't you dare turn it into an "Aw, shucks, let's go easy on the guy. Hasn't he suffered enough?" moment. Because there'd be nothing "admirable" in that.