From complaints of historical inaccuracy to heated Twitter feuds, the Academy Awards are always a hotbed of drama 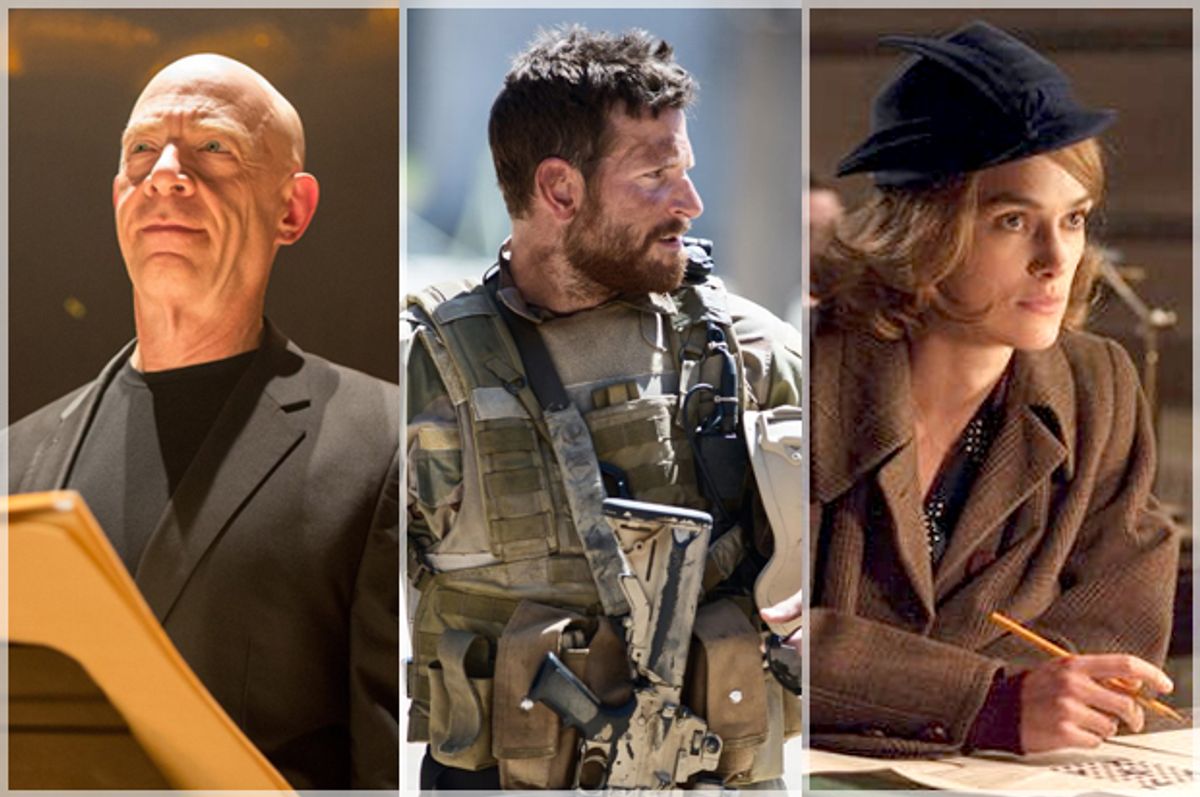 While we all know about the major controversies underpinning this year's Oscars — such as the shameful lack of diversity in this year’s #OscarsSoWhite nominees — no film is immune from its own internal drama. Here's a look at some of the specific quarrels and criticisms that have plagued 10 of this year's nominated films:

“American Sniper”
Perhaps the most controversial nominee of the lot, Clint Eastwood’s Iraq War film has been criticized by many of the left (Salon included) as pro-war propaganda that fails to examine the larger roots of the conflict, while the right has rushed to defend it. More than a month into its release, the partisan mudslinging shows no signs of ceasing.

"The Imitation Game"
Morten Tyldum's biopic has been faced with heavy criticism regarding its historical accuracy and its depiction of codebreaker Alan Turing (played by Benedict Cumberbatch). A great piece by Christian Caryl in the New York Review of Books lays out some of the issues; namely, that the film "reduc[ed Turing] to a caricature of the tortured genius" and mishandled the depiction of his sexuality. As Caryl wrote, "This is indicative of the bad faith underlying the whole enterprise, which is desperate to put Turing in the role of a gay liberation totem but can’t bring itself to show him kissing another man—something he did frequently, and with gusto.... The Imitation Game is a film that prefers its gay men decorously disembodied."

"Whiplash"
Despite being an original story, Damien Chazelle's Sundance film “Whiplash” was nominated as an adapted screenplay because it was “adapted” from the short proof of concept film that writer/director Chazelle made to garner interest for the film, even though films with similar trajectories have still been considered “original” in the past.

"Selma"
Before the narrative around "Selma" was all about Ava DuVernay's snub and racism within the academy, Selma had its own accuracy controversy to contend with. Critics complained that the film underplayed Lyndon B. Johnson's involvement in the voting struggle and depicted him as falsely antagonistic toward Martin Luther King's efforts.

"Theory of Everything"
Yet another accuracy controversy (are you seeing a pattern here?) as a number of reviewers have lambasted the film for straying too far from the truth. As Michelle Dean writes in the Guardian, "While that always happens in these based-on-a-true-story films, the scale of the departure in The Theory of Everything is unusually wide. The film becomes almost dishonest – in a way that feels unfair to both parties, and oddly, particularly Jane Hawking herself."

"Foxcatcher"
Wrestler Mark Schultz, played by Channing Tatum in “Foxcatcher,” slammed director Bennett Miller last December with a series of angry tweets and Facebook posts, arguing that Miller sullied his legacy (in part by alluding to a sexual connection between himself and coach John du Pont). "I told Bennett Miller to cut that scene out and he said it was to give the audience the feeling that duPont was encroaching on your privacy and personal space. I wasn't explicit so I didn't have a problem with it. Then after reading 3 or 4 reviews interpreting it sexually, and jeopardizing my legacy, they need to have a press conference to clear the air, or I will,” he wrote on Facebook, along with a series of very angry tweets (he later apologized).

"Leviathan"
The Russian nominee for best foreign language film has garnered serious controversy back at home, with critics calling the film out for its blasphemous depiction of Vladimir Putin and decrying it as anti-governmental propaganda.

"Ida"
Poland's "Ida" is another foreign language film nominee that has come under fire on its home turf, with right-wing Poles criticizing the film for perceived anti-nationalist sentiment. As Deadline reports, "The Polish Anti-Defamation League, Reduta Dobrego Imienia, has accused the film of failing to acknowledge the German occupation of Poland, calling it “anti-Polish” and saying audiences “especially unfamiliar with the history of Europe” may leave the film believing “the Holocaust was caused by the Poles.”"

“Beyond the Lights”
In a controversy somewhat peripheral to the film itself, songwriter Diane Warren slammed Rita Ora — who will be performing Warren’s nominated song “Grateful” from “Beyond the Lights” this Sunday — for her failure to promote the song, complaining, "It's like, there's no support. She's going to sing for, what, a billion people? What an opportunity! And she tweeted about it twice. I'm like, 'Really?’” She also criticized the label for failing to publicize “Grateful”: “They're not doing anything. I'm just scratching my head. I've never had a song from a movie that this has happened with. I could see them not putting it out before the nomination -- because you never know -- but once you're nominated, what the f--? It's the sloppiest thing I've ever seen."

"Boyhood"
Following the lead of the Producers Guild of America, the academy has refused to give producing credit to "Boyhood" producers John Sloss and Jonathan Sehring, arguing the men didn't meet the strict guidelines for attaining a production credit (criteria that arguably applies less easily to a 12-year-epic like "Boyhood"). If "Boyhood" takes home best picture, as many are predicting, Sloss and Sehring will have to remain in their seats.