Of course Eddie Murphy side-stepped the Bill Cosby joke on SNL: He's been playing it safe for years

"Raw"-era Eddie Murphy would have nailed the Bill Cosby "SNL" joke, but that Eddie Murphy is no longer with us 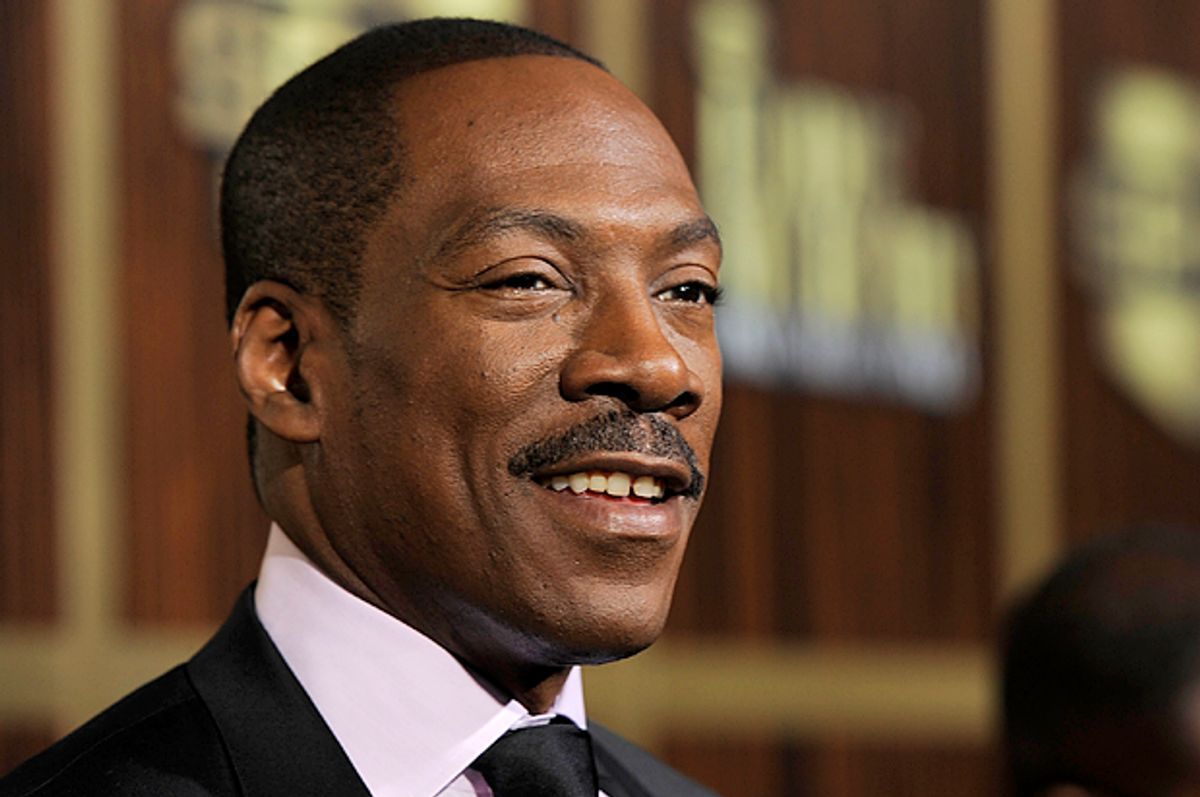 Last night, Norm Macdonald, in one of his regular Twitter fireside chats, shared a brilliant story from behind the scenes at “SNL 40.” During the show's “Celebrity Jeopardy" skit, one of the categories led to a video daily double, which featured Kenan Thompson, as Bill Cosby, mixing a drink. “Oh dear God, no, I’m very sorry. We filmed that in June," said Will Ferrell’s flustered Trebek, as the camera quickly cut away. It was a funny segment, one made much funnier by Norm's revelation that it wasn’t supposed to be Kenan in the Cosby sweater at all — it was supposed to be SNL’s returning prodigal son, Eddie Murphy.

Murphy was apparently reluctant to play Cosby in the sketch. Macdonald was dispatched to convince Murphy to do the bit. After a good hour talking in his dressing room, he thought he had succeeded. He hadn't. As Macdonald said, in tweet form:

The story sparked immediate controversy. On Twitter, Piers Morgan wrote, "Something very admirable, too, about Eddie Murphy not wanting to kick Bill Cosby when he's down - given their history. #SNL” Then Judd Apatow, who has been an outspoken critic of Cosby and his supporters, hit back with, “what?! He is a rapist.  That is not loyalty.  It is choosing to support a rich rapist over thirty victims.” It’s the same fight we’ve seen played out time and time again whenever anyone offers anything approximating a defense of Cosby. So what really drove Murphy's decision? Was Eddie just trying not to kick a man when he’s down? Was Eddie tacitly supporting Cosby by choosing not to do the bit? Or was it something else altogether?

Certainly reverence might have been a factor. I have no doubt that Murphy reveres -- or at least, once revered -- Bill Cosby. Cosby was a beacon and a trailblazer for black comics of Murphy’s generation. But Murphy also used to be unafraid to tackle his idols. In Murphy's iconic 1987 standup special “Raw,” he talks about a phone call he received from Cosby (prefacing it with “I’ve been a big fan of Bill Cosby all my life”), in which Cosby launched into him for his lewd material and demanded that he stop saying “fuck” onstage. Murphy then told Richard Pryor what Cosby said, and Pryor responded in inimitable Pryor fashion, calling Cosby a ""Jell-O Puddin' eatin' motherfucka” and saying that if the audience liked Murphy's comedy, then that was all that mattered. The old Eddie Murphy -- the Eddie Murphy of “Raw" and "Delirious" -- was infused with the spirit of Richard Pryor, the spirit that said follow your instinct, be true to yourself, do the bit that feels the most truthful and dangerous instead of acquiescing to your critics. ‘80s Murphy was lewd, funny, and unafraid. Despite his reverence for Cosby, he wouldn't kowtow to Cosby's policing of the way he ran his act. ’80s Eddie Murphy — now he might have have done the bit.

But the narrative of Murphy’s career has been to firmly distance himself from the Eddie Murphy he once was. The fearless R-rated comedies Murphy put out in the early years have been replaced by staid, risk-averse family fare that seems constantly beholden to the box-office bottom line: “Daddy Day Care,” “Imagine That,” “Norbit," etc. The later half of Eddie Murphy’s career has been shaped by his unwillingness to play ball or to acquiesce to what the public demands of him. He rarely gives interviews. He hasn't gone the same route as many other beloved comics of his generation, returning to standup or taking bit parts in edgy comedies. He refused to return to “SNL” until now, because of a perceived slight by David Spade decades ago. He stormed out of the Oscars when he didn’t win for "Dreamgirls." He bailed on a Richard Pryor biopic because of "creative differences". The stubbornness and strength that was once mobilized to upend the status quo and pioneer fearless, boundary-breaking humor, has morphed into a broader resistance to the demands of the industry and institutions that once embraced him.

Because it's not like Eddie Murphy refused this bit in favor of some other bit. His long-awaited “SNL” appearance consisted of a few minutes of fawning introduction from Chris Rock and then a small, wishy-washy speech, with no jokes or impressions or anything juicy whatsoever. We had all hoped that his eventual return to 30 Rock would be a comeback, a return to form. What would we get: Mr. Robinson’s Neighborhood? Gumby? A Cosby impression? Well, nope. Eddie finally returned to "SNL" after 31 years and did no comedy at all.

So I don’t think it’s a question of Murphy kicking a man when he’s down or knowing that the laughs aren’t worth it. Rather, it’s a predictable bit of image monitoring completely in line with Eddie Murphy’s current public persona. The same rebellious instinct that used to steer Murphy towards the tough joke now steers him away from the jokes altogether: That now says I will not accede to your expectations of me. I will not be the Eddie Murphy you remember me as, because I am not him anymore. In a way, Macdonald is right. Murphy doesn’t need the laughs. But it’s not because he’s the coolest. It’s because he’s not cool anymore.

I would have loved to see Murphy do that bit. It would have been the perfect synthesis of nostalgia, celebrity and comedic firepower, in a night made possible by all three. It would have marked the return of Murphy in the most surprising and satisfying way, with Murphy reprising an impression he made iconic, a perfectly orchestrated jab at Cosby, and proof that the old spirit of "Raw" Eddie Murphy --for whom no humor was off-limits -- lives on. It would have showed that Murphy is in the game. But that Murphy has long been dead, and at "SNL 40", the proof was in the pudding pops. Why are we surprised?