Scott Walker's Achilles heel: How his immigration record could scuttle his 2016 bid

While Walker now spouts conservative rhetoric about "amnesty," he once sounded a different tune 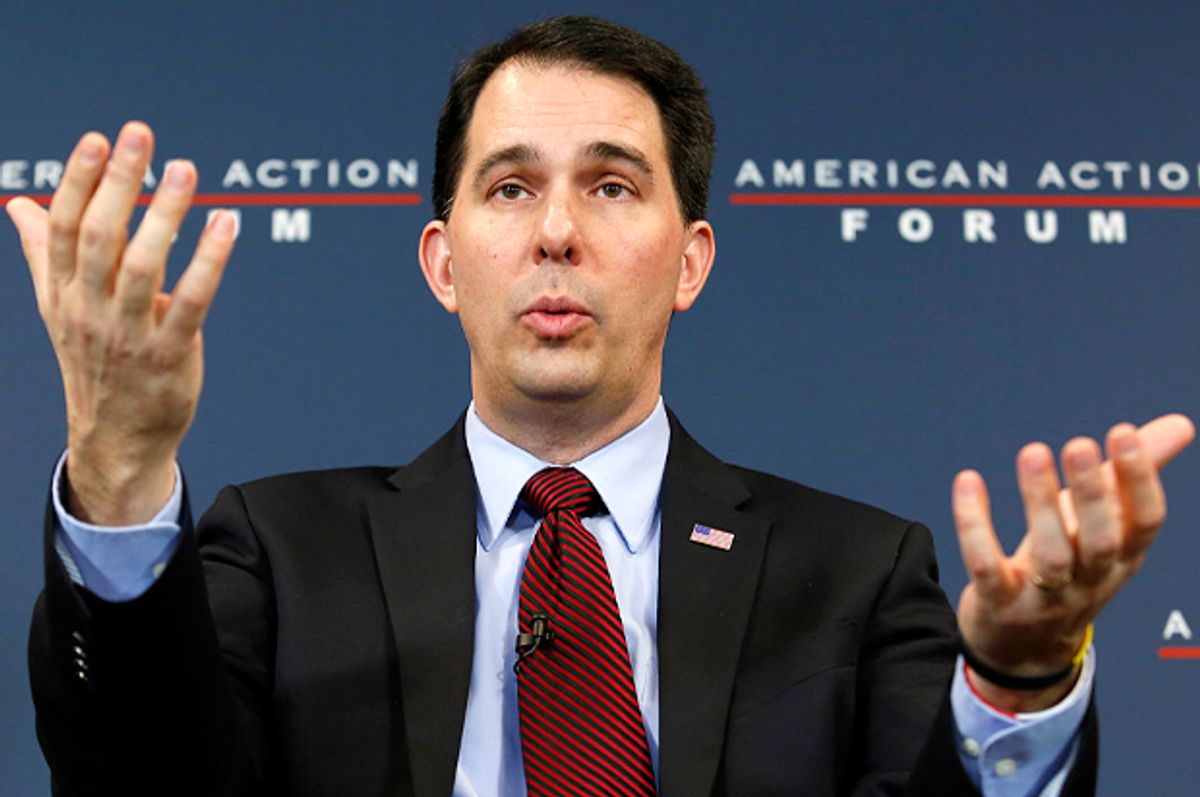 Wisconsin Gov. Scott Walker has vaulted into the top tier of the Republican Party's 2016 presidential contenders, displaying strength in early primary states and building a formidable fundraising network as he prepares to go up against Jeb Bush's financial juggernaut. His crossover appeal to the GOP's business and Tea Party wings, combined with his evangelical background, positions him well to emerge as the leading alternative to Bush, whose heresies on issues like immigration reform and the Common Core education standard rile the right-wing base. But Walker's White House bid may yet falter amid revelations of his own past impurities.

Though Walker told ABC's Martha Raddatz earlier this month that he opposes "amnesty" for unauthorized immigrants, he hasn't always sounded the same tune. National Review reported last week that as Milwaukee county executive, Walker signed a 2002 resolution backing comprehensive immigration reform.  A Walker spokesperson told the magazine that the resolution Walker signed was actually watered down from a more strongly pro-reform draft, but the resolution called for “greater opportunity for undocumented working immigrants to obtain legal residency in the United States.”

Four years later, Gabriel Debenedetti reports, Walker signed another resolution expressing support for the Secure America and Orderly Immigration Act, a comprehensive reform bill authored by Sens. Ted Kennedy (D-MA) and John McCain (R-AZ). Conservatives derided the measure as "amnesty," with the Heritage Foundation arguing that the Kennedy-McCain legislation "undercuts the rule of law by rewarding those who have acted wrongly and will only encourage further illegal entry."

As recently as two years ago, Walker signaled support for immigration reform, telling Politico in February 2013 that he backed a pathway to citizenship. “We just have a broken system. And to me, if somebody wants to come in and live the American dream and work hard … we should have a system that works and let’s people in,” Walker said at the time.

Those remarks came in the aftermath of the Republican Party's crushing defeat in the 2012 elections, in which President Obama trounced Mitt Romney among Latino voters by a margin of 71 to 27 percent. That dismal performance -- coming just eight years after the pro-immigration reform George W. Bush secured 44 percent of the Latino vote -- led even conservatives like Sean Hannity to suggest that the GOP should embrace reform, although that support proved fleeting.

The political ramifications of Walker's immigration record remain unclear, but there's reason to believe it may weaken him heading into the GOP primaries. While business-minded backers won't be fazed -- indeed, they'll largely see Walker's past statements on the issue as encouraging -- the Tea Party fans Walker won with his union-busting and budget-slashing initiatives may well sour on him once they become acquainted with his record. Given that Walker is being touted as a conservative alternative to Bush, it doesn't help his case that he has voiced views similar to the former Florida governor's on one of the issues that makes Bush vulnerable to a conservative challenge in the first place.