The right’s latest rape lunacy: Guns on campus won't prevent rape -- but they will put women in jail for self-defense

A Republican assemblywoman wants to arm women to stop rape. Here's why it's a recipe for more violence 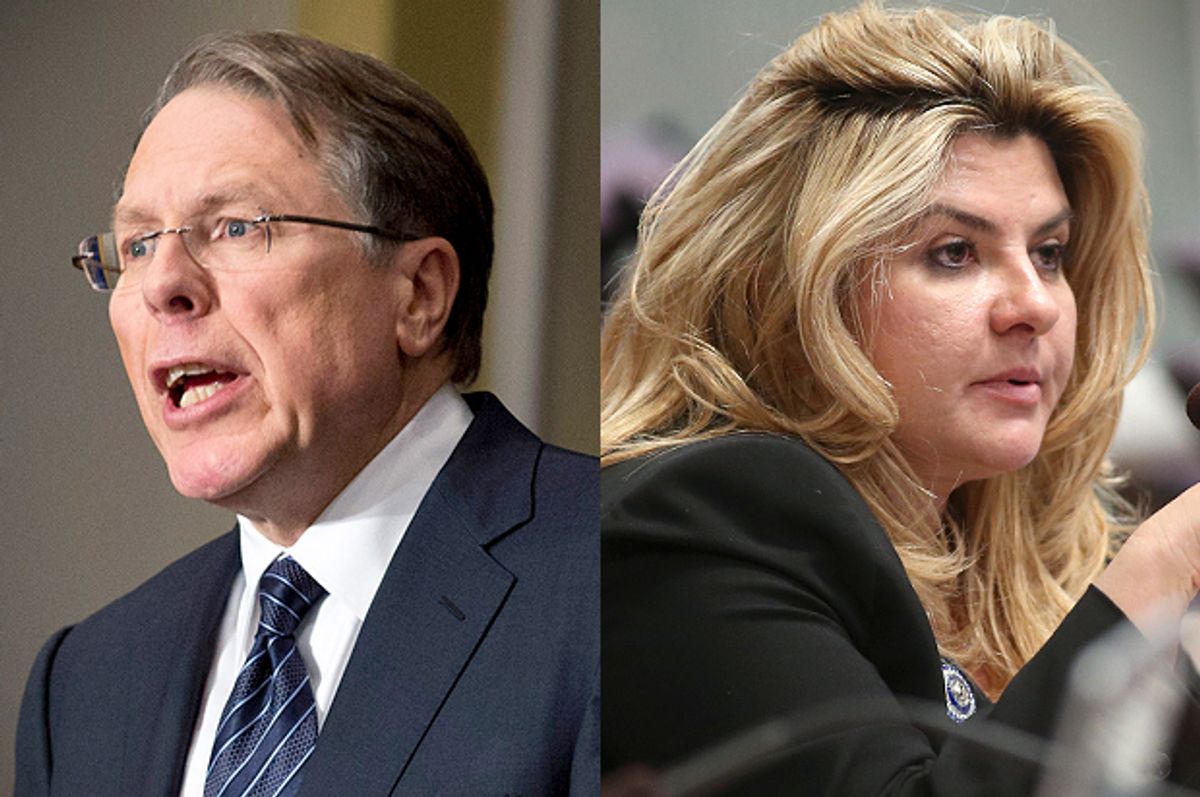 There is an odd kind of disconnect in the argument that allowing guns on college campuses will reduce rates of sexual violence. As the New York Times reported on Wednesday, several states have introduced measures to legalize firearms on campus. And many conservative lawmakers, perhaps spotting an opportunity in current debates about college sexual assault, have claimed that such a policy amounts to rape prevention.

Lawmakers in 10 states have introduced so-called campus carry bills, though some have made their claims about sexual assault and safety more explicit than others. As a sponsor of a Nevada bill allowing students to carry firearms, Republican Assemblywoman Michele Fiore told the Times, “If these young, hot little girls on campus have a firearm, I wonder how many men will want to assault them. The sexual assaults that are occurring would go down once these sexual predators get a bullet in their head.”

Most rapes -- nearly 70 percent of all rapes, in fact -- are committed by a person known to the victim. So what lawmakers like Fiore are advocating, in practice, is that women pack heat at boozy frat parties, while studying in a friend’s dorm or, say, on their person while asleep in bed with Chuck from their Intro to Philosophy class. And because we live in a culture that serially disbelieves victims of sexual assault, such a measure would likely serve to criminalize women who shoot to defend themselves against an assault. Only 3 percent of rapes are referred to prosecutors and only 2 percent lead to a felony conviction. In such a system, how could any victim feel confident that her rights would be protected if she shoots in self-defense knowing that her rapist will likely get off?

Beyond placing the onus to prevent rape on victims, these laws, and lawmakers like Fiore, ignore everything we already know about guns and violence against women. Namely that, far from preventing violence, the presence of a firearm makes a violent incident much more lethal for women.

It remains unclear how much data, or, frankly, how many dead women, will be required before gun advocates accept this basic fact. In domestic violence incidents, a gun increases the risk of homicide by a staggering 500 percent. A 1998 study on women and self-defense found that for every time a woman used a handgun to kill an intimate partner in self-defense, 83 women were murdered with a handgun by their intimate partners. And data has consistently shown that the presence of a gun in the home is associated with a higher risk of homicide, suicide and accidental injury and death.

Fiore’s rhetoric in support of the measure also invokes the danger of stranger rape, despite the fact that most campus assaults don’t fit this scenario. But even if we narrow our focus to incidents of sexual violence that involve strangers in the night, given the data on how infrequently women successfully use a gun in self-defense, such a measure still offers very little in the way of safety for victims. Instead, by introducing guns into an ostensibly gun-free zone, Fiore is arming the very men she claims would be frightened by such a measure.

And again, in a system where most rapists will never be held accountable for their crimes, asking women to shoot with the confidence that the law is on their side is a dangerous request. It’s not hyperbole to suggest that advocating the use of lethal force in a culture in which many conservatives argue that most rape on college campuses is just “regretted sex” is a recipe for criminalizing women for surviving.

In fact, we have already seen women criminalized for acting in self-defense. Marissa Alexander was incarcerated after she fired a warning shot to defend herself against her abusive partner. She was incarcerated for four years, and is still under house arrest for firing a shot that harmed no one but may have saved her life. And we have already seen how existing self-defense laws leave out victims of domestic violence. In South Carolina, another state considering such a measure under the guise of rape prevention, prosecutors have argued that domestic violence victims are not covered by stand your ground.

“[The state Legislature’s] intent… was to provide law-abiding citizens greater protections from external threats in the form of intruders and attackers,” prosecutor Culver Kidd told the Post and Courier in October. “We believe that applying the statute so that its reach into our homes and personal relationships is inconsistent with [its] wording and intent.”

The gun-as-rape-prevention is just the latest version of the cultural and political gymnastics people are willing to perform to ignore the realities of violence against women. There is nothing in such a measure that would address sexual violence on college campuses. Instead, it would introduce firearms into a campus environment where they would likely prove deadly, and put women at risk of incarceration if and when they shoot in self-defense. In the absence of laws to protect them and in our current vacuum of rape denialism, it is not a question of if a woman will be incarcerated for using a gun to protect herself. It's a matter of when.

There is no universe in which arming students makes students safer -- from the threat of rape or in general. But Fiore is confident her measure will pass the Republican-controlled Legislature, and Nevada may very well become a state where college rape victims are incarcerated for doing exactly what she asked of them.