The GOP's Giuliani disaster: Why Rudy's vile nonsense is a big problem for Republicans

The ex-mayor has long been a demagogue. But for Republicans, his nasty comments may hint at a new political threat 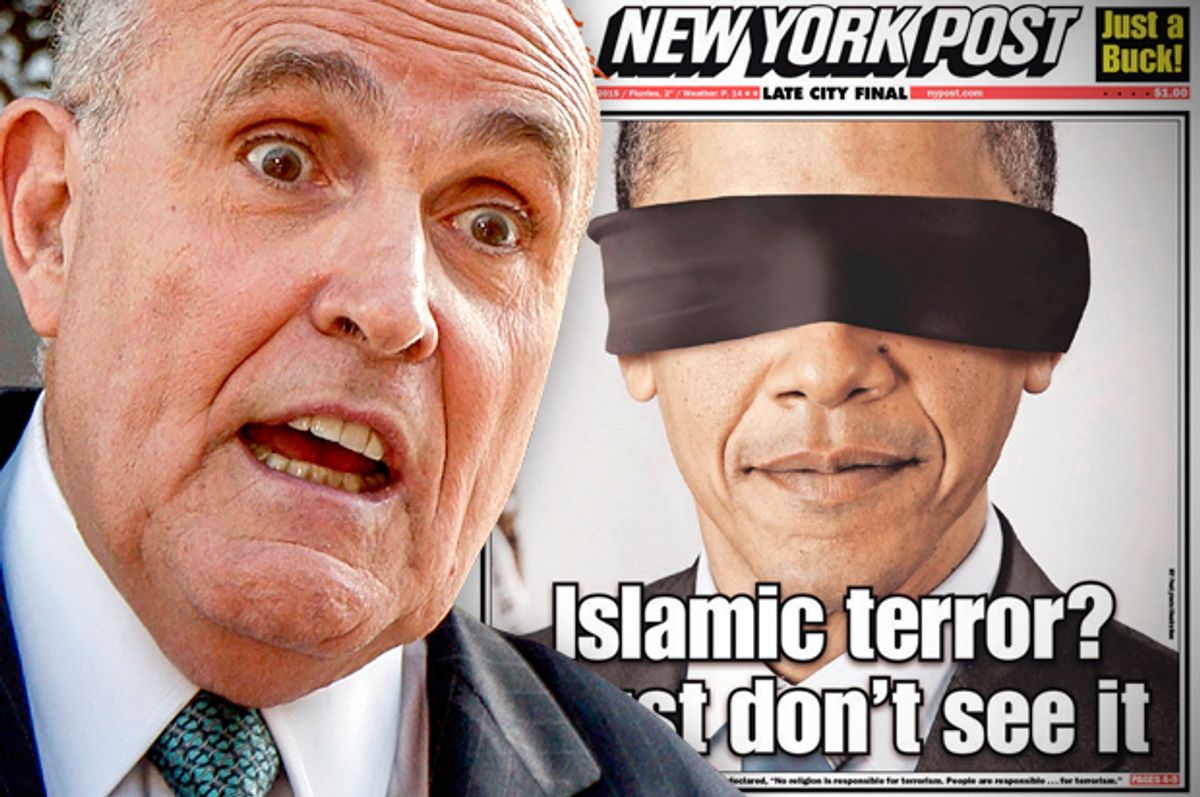 For millions of American workers, the “pedal to the metal” growth of the labor market means life is about to get better. But for those conservatives and Republican partisans who are looking to 2016 already, a healthier economy means life is about to get worse. Why? Because on the national level, electoral politics tends to operate on one of two channels — one cultural, the other economic. And in a country that’s more ethnically diverse and socially liberal than ever, it’s harder for the right to win if it’s attacking President Obama over issues of identity and culture than if it’s hammering him about dollars and cents.

I’m hardly the first person to recognize the political calculus here. (The GOP establishment wing, in fact, seems convinced that focusing on economics is the only way they can win.) But while this dynamic has been present throughout the Obama years, it’s become more pronounced lately, as criticism of the president has begun to shift away from the unemployment rate, GDP growth and “job-killing regulations” and toward assertions that he isn’t really one of “us.” Or, as ex-New York City Mayor Rudy Giuliani put it this week before an audience of Manhattan conservatives, that Obama “wasn’t brought up the way you were brought up and I was brought up through love of this country.”

The thoroughly odious Giuliani’s whole political career has been built on an edifice of thinly-veiled racism and ferocious demagoguery, so it wasn’t a surprise to see him channel such toxic undercurrents. (And it is similarly unsurprising to see him defend himself by cribbing the "Obama is anti-colonial" argument from Dinesh D'Souza, a far-right provocateur and convicted felon who recently called the president a “boy” from the “ghetto.”) But Giuliani’s incendiary drivel was firmly in step with much of the conservative movement right now, which has begun to nurture a Captain Ahab-like obsession with what it sees as a telltale sign of Obama’s foreign nature — namely, his refusal to describe ISIS as Islamic, and his insistence that extremism, rather than Islamic extremism, is a danger to the globe.

The right’s been banging this drum for years now, of course. But the rumble has predictably begun to sound more like rolling thunder as the medieval sadism of ISIS has become regular front-page news. For example, when the administration held a three-day global conference earlier this week about thwarting violent extremism, leading voices in the right-wing media — like the New York Post, Fox News and Matt Drudge — saw reason to spend untold amounts of time and energy slamming the president for refusing to use those two magic words. The “theory” proffered by talking heads on Fox and pundits at National Review held that Obama’s stubbornness was a result of political correctness. On a more underground level, though, it was easier to see the subtext: He’s a secret Muslim! (The actual reason has gone totally unmentioned.)

If you’re the kind of conservative who likes to think of yourself as more William F. Buckley than Michael Savage, this must all be at least slightly embarrassing. But the problem for the Republican establishment and its sympathizers is that the GOP base’s resurgent Christian ethno-nationalism isn’t merely gauche; it’s politically dangerous. The Giuliani example offers a case in point. Because while most of the folks who were there to hear “America’s Mayor” were generic GOP fat cats, one of the men present was Wisconsin Gov. Scott Walker, the current lead challenger to the front-running Jeb Bush. And if I were one of the establishment kingmakers Walker’s trying to seduce, I would have found his handling of the Giuliani contretemps very disconcerting.

Instead of going with the usual soft-touch scolding we expect of a presidential candidate responding to nastiness from one of their own, Walker tried to avoid expressing any opinion at all. He told the folks at CNBC that Giuliani “can speak for himself” and that he was “not going to comment” on whether he agreed that the president of the United States of America hates the United States of America. When he was pressed to state whether he found Giuliani’s remarks offensive, Walker merely answered with some “aw, shucks” cornpone bullshit: “I'm in New York. I'm used to people saying things that are aggressive.”

Needless to say, playing footsie with this kind of bomb-throwing is not going to cost Walker much in the Iowa plains or in the rolling hills of South Carolina. And Walker, who’s no dummy or slouch, seems well aware that he can only win the nomination if he’s as viable in the rarefied air of the Republican establishment as he is among the Tea Party masses. Which means there’s no upside to taking a bat to Giuliani for saying what many, many conservatives — including those at ostensibly respectable outlets — believed already. But that’s exactly the problem that confronts the adults in the GOP: If the economy is good enough to reduce the appeal of a “pragmatic” candidate like Bush, the party rank-and-file will want more Giuliani-style lizard-brained tribalism instead.