Why "Fifty Shades of Grey" is actually good for women

Forget all the snarky trend pieces and listicles. The film has helped women reclaim their sexuality in so many ways 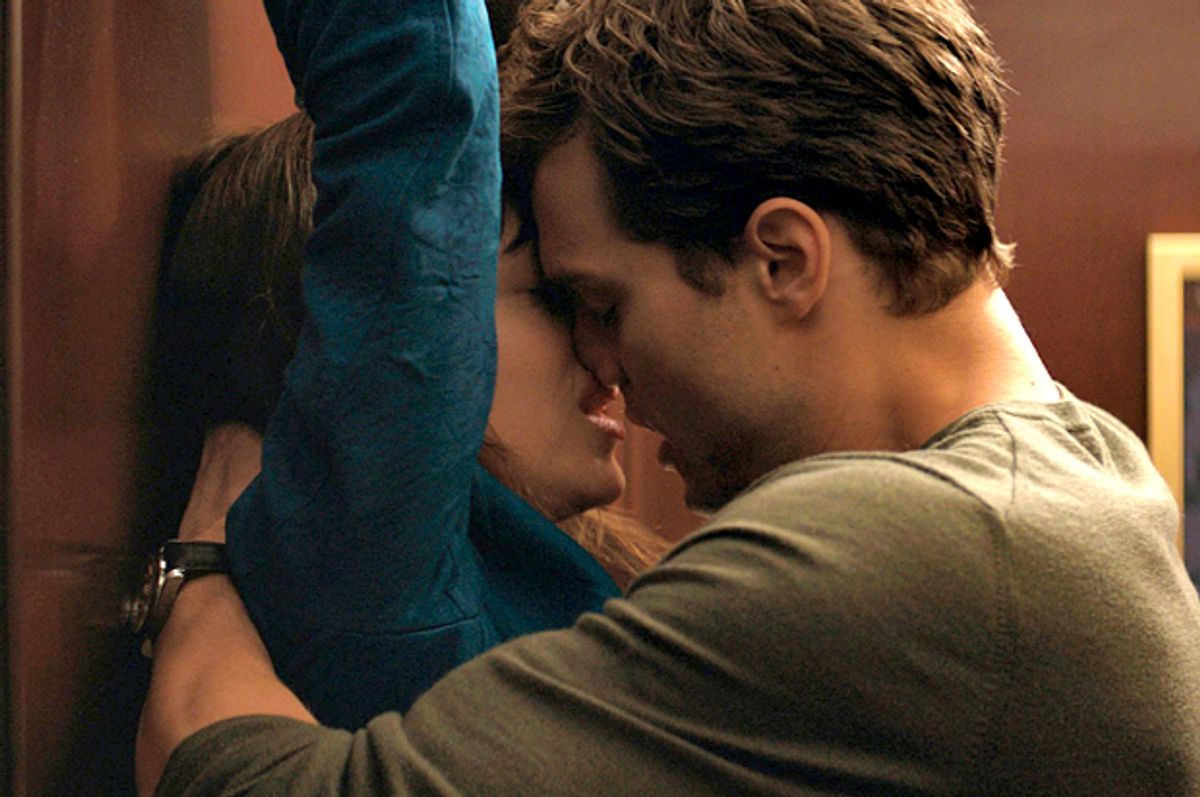 When I first read Fifty Shades of Grey in 2013, I hated it, for the same reasons that all educated feminists hate it. The plot was dull and derivative, the characters unimaginative and unsexy, and the prose read like it was pounded out on a keyboard by a squad of hallucinogen-addled capuchins who’d read too much Barbara Cartland in middle school.

When I saw the movie last week, however, I was surprised to find I adored it. While this could have something to do with the fact that I’d downed three shots of whiskey in a diet Cherry Coke before entering the theater, the two and a half hours of BDSM-lite were some of the best I’ve ever spent in a movie house. Fifty Shades was campy, self-aware, and even sexy (though I suppose any movie featuring two attractive naked people going to town on each other could be considered sexy). In short, I found myself totally in agreement with Slate’s Amanda Hess, who wrote that she left the movie feeling “flushed, tingly, a little out of control,” like she was “on a first date with someone I’d secretly crushed on for a long time.”
More from The Daily Dot: "We finally know how much Joey owed Chandler at the end of 'Friends'"

The most troubling thing about the sex in Fifty Shades isn’t the BDSM itself: It’s the characters’ terrible communication. Throughout the books, Ana isn’t expected to say what she wants from sex—Christian just knows. With but a few swift strokes, he can get her to orgasm—loudly, frequently, in any position and any location—by intuiting what her body wants. Sex itself is portrayed as a comprehensive proxy for the emotions involved in their relationship. Although they do talk about their relationship, Ana’s too afraid of losing Christian to express the depth of her fears about the kind of sex he’s asking her to have.

I agree with Green that the book’s depiction of the relationship between the sexually inexperienced Anastasia Steele and wealthy older billionaire Christian Grey is at best problematic and at worst horrifying when it comes to the issue of consent. But I feel the movie issues something of a corrective to this dynamic, and I have a hard time buying feminist protesters’ arguments that Fifty Shades promotes violence against women, or even that it puts emotionally damaged men with boundary issues like Grey on a pedestal. In fact, I’d argue that as a cultural phenomenon that has brought non-normative sex and female desire to the mainstream, Fifty Shades of Grey has done far more good than harm.

One of the most common arguments leveled against Fifty Shades of Grey is that Anastasia Steele, the shy, adorkable, Victorian-lit-reading, PG-13-expletive-spouting narratrix, doesn’t have enough agency or sexual experience to fully consent to the contract Christian makes her sign, and is thus only acquiescing to his desires to please him. (My friends and I have a word for women like Anastasia: A “Smee,” so dubbed after Captain Hook’s toadying sidekick, a second fiddle who is defined by their willingness to acquiesce to others’ desires.)

But while Book Anastasia is Smee-like and eminently slappable, the same doesn’t quite apply to Movie Anastasia, who, as Slate’s Hanna Rosin has pointed out, is far more “self-possessed” and wry than E.L. James’ lame-o characterization would suggest.

In the film version of Fifty Shades, it’s not hard to see why Jamie Dornan’s Christian Grey is with Johnson’s Anastasia Steele, despite their differences in age and class. As Rosin puts it, “she makes jokes about serial killers and drunk dials while waiting in line for the bathroom; he uses corporate jargon such as ‘incentivize’ and ‘harnessing my luck.’ She seems with it, and he seems clueless.” If anything, the one thought that resounded in my head during the movie wasn’t what this moody, sexy billionaire was doing with this virginal college girl, a constant refrain throughout the book, but what she was doing with him.

In a lot of ways, Movie Christian reminded me of a better-looking, wealthier version of the type of guy you date in college, who woos you with his good looks and sensitive topless piano-playing abilities, but who you dump a few months later because he’s bad in bed and he screens your texts and he cries whenever his band’s gigs get canceled. Every girl has dated that guy, and every girl knows that he sucks. Who cares if he has a fucking glider?

The Smee-ness of Movie Christian leads me to the argument that many Fifty Shades detractors have made: that, because Christian is rich and good-looking, it glosses over and romanticizes much of his abusive behavior, including tracking Ana’s cell phone and showing up at her family’s house uninvited. “Would you be happy with a partner who micro-managed your life, dictated what you ate, what contraceptive you used, required you to exercise a certain amount of days a week, and cut you off from your friends and family?” the Independent wrote in an op-ed about Christian as domestic abuser. “Add some good looks, a six pack and billionaire status and voila: you have Christian Grey.”

All of these actions are undeniably abusive, so this argument makes sense to me. It’s a similar one that was used against Edward Cullen, the possessive, brooding, overly controlling male love interest in the Twilight series (which was ultimately used as the template for Christian Grey in E.L. James’ original fanfiction). But where I think Twilight and Fifty Shades differ is that while Twilight’s perverse conception of romance was marketed to a younger, more susceptive young-adult audience, who might be inclined to think that a sparkly, emotionally unavailable dude watching you sleep was the template for a healthy relationship, Fifty Shades was marketed to older female readers, or what Rupert Murdoch derisively referred to as “middle-aged women’s groups.”

When people argue that a cultural artifact is racist or sexist, one of the most oft-used defenses is “Oh, it’s just a joke” or “Oh, it’s just a fantasy.” While I typically loathe these arguments, I do think it applies to Fifty Shades, in part because it is explicitly marketed as an erotic fairy tale for older women who have enough sexual experience to differentiate between the fantasy of a man like Christian Grey and the reality. This makes it not so much a romanticization of domestic abuse as a conduit for women to fantasize about being a young, sexually inexperienced naif, learning the ropes from an older, more dominant male about their bodies and their desires.

It’s this element of submission and sacrificing your own sexual agency to an older, more experienced man that’s at the core of women’s objection to Fifty Shades. But it is also at the core of a lot of our sexual fantasies, and to me, this is precisely what makes Fifty Shades of Grey so appealing. It’s not about women’s need to be “dominated,” nor is it a direct appeal to the consumerist fantasy of a wealthy, good-looking white knight billionaire swooping down and saving you from your life of term papers and puppy-eyed, predatory college boys. I don’t even think the movie is even about Christian Grey at all; were Jamie Dornan replaced by a broom with a torso, I don’t think anyone would even be able to tell the difference.

To me, Fifty Shades is all about Anastasia, her sexual coming-of-age, and how she grapples with the questions of submission and control, and desire and consent, that pervade even the most vanilla of sexual relationships. And it’s also about the women who are watching her initiation onscreen and reliving their own sexual coming-of-age stories, one topless piano-playing scene and slow-motion flogging at a time.

More from The Daily Dot: "Jason Momoa's Aquaman costume is as gritty as you'd expect"

Prior to Fifty Shades, there were scant resources for women to publicly explore and claim ownership of these fantasies. But what the book did is open the floodgates and create a lucrative market for women to explore their sexuality. The impact that the books have had on the female-oriented pleasure industry is something that even Fifty Shades’ detractors openly acknowledge.

In the midst of all the snarky trend pieces and listicles about Fifty Shades, it’s tough to remember how much the movie has done for helping women reclaim their sexuality. But as a feminist and a sex writer who believes more firmly than I believe most things that depriving women of their sexual desires is nothing short of a deprivation of an elemental human right, the debt we owe Fifty Shades for what it has done for female sexuality is hard for me to forget.