Red carpet coverage doesn't have to be sexist

Can Hollywood's biggest night do better than "Who are you wearing?" 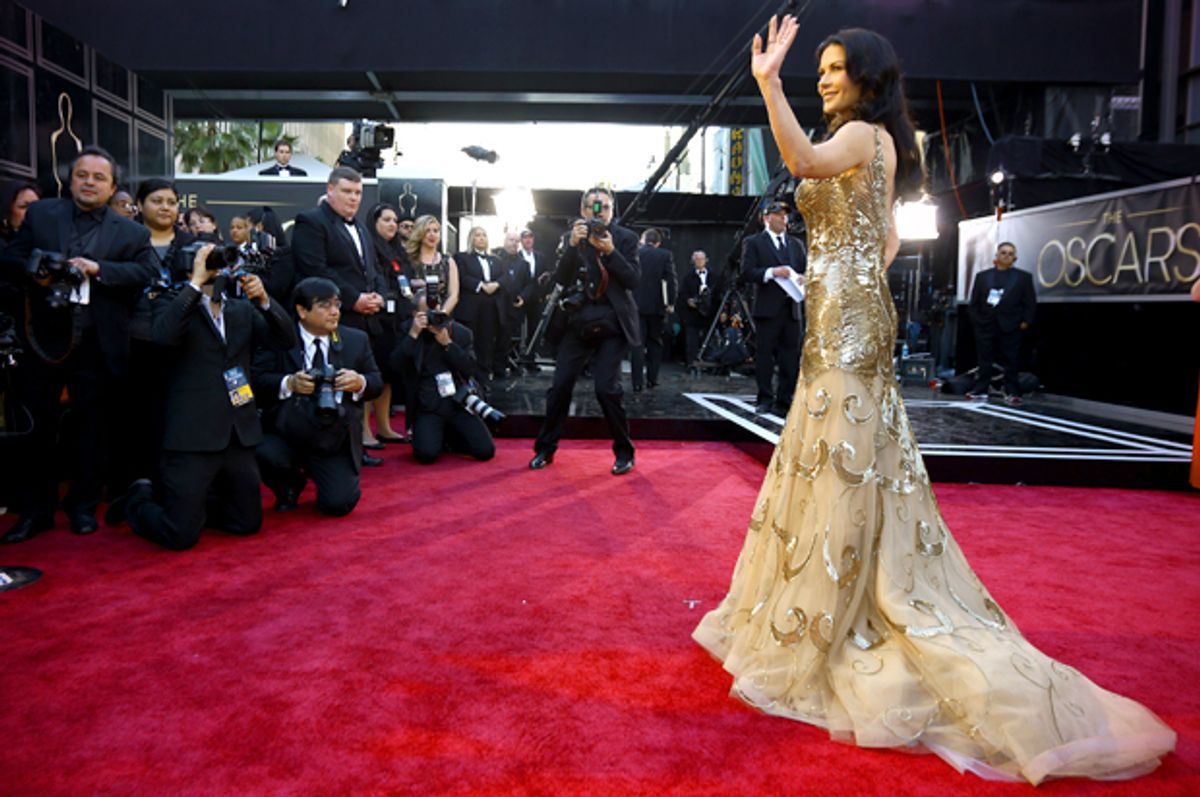 On Sunday, an army of expensively dressed, coiffed, sculpted and manicured movie stars will do what they have done for much of the history of awards nights. They will walk and twirl around and make inane chitchat as they enter the event, and they will be judged by millions for how capably or embarrassingly they perform. But this year already looks to be a tipping point for the ritual — a chance, after years of a deep slide toward microscopic scrutinizing of women's bodies, to do it a little better.

It started in earnest a year ago. First, Elisabeth Moss deftly put her own spin on posing for E!'s ridiculous, nail-flaunting "mani cam" at the Golden Globes, slyly showing off her manicure on one finger in particular. Then Cate Blanchett, appearing at the SAG Awards, noted an E! News camera panning luxuriantly up her body and leaned down to meet the lens, asking the instantly viral question, "Do you do that to the guys?" Since then, thanks largely to the Representation Project's #AskHerMore campaign, there's been increased attention on how the media treats actresses, and over the past few months, as awards season has kicked again into high gear, there's been a groundswell of pleas to take red carpet coverage in a different direction.

It seems to be having an effect. At this year's SAG awards, Julianne Moore, Reese Witherspoon and Jennifer Aniston – who punctuated her no with a whip-crack flourish -- all declined to let their fingers do the walking on the mani cam. But, as Alyx Gorman noted last month on the Mama Mia blog, other actresses, who have lucrative jewelry and cosmetic deals, may feel more favorably disposed to name-check the brands that are paying them to do so. "It’s worth acknowledging that actors aren’t passive victims of a global obsession with image," she wrote. "They’re savvy media manipulators who leverage that obsession with image for a great deal of personal financial gain." And that truth is one of the many great sticky wickets of modern red carpet coverage.

We are a long, long way from the days when Joanne Woodward walked off with an Oscar in a hundred dollar dress she put together herself. We're even pretty far gone from Sharon Stone rocking a shirt from the Gap. And you're going to have to dig deep into your memory to come up with the last Oscar fashion moment that was a truly no damns left to give statement.

Even 10 years ago, we were mostly limited to the entertainment TV shows to give an omniscient assessment of how the women of the red carpet looked – and celebs were already starting to play it super-safe. (But Blanchett's yellow gown still rules into infinity.) We didn't have the instant wrath of the Twitterverse, ready to rain down on anyone with a laugh line or cellulite or an unfortunate hemline choice. Awards – and the Oscars in particular – have now become big endorsement moments for the stars, and if their willingness to turn themselves into billboards for the companies they represent stems at least in part from the intense scrutiny they're under to look perfect, you still can't say they're entirely victims of the cruel social media monster.

Here's the other inescapable thing about red carpet watching: There's more to say about women's clothing. There just is. What have the men to offer the sartorial conversation? Traditional tux, tux, tux, occasional white jacket. If you can put on pants, you can pretty much do it right. And that's fine. Let's not pretend there's something inherently sexist or bad about wanting to talk about Lupita Nyong'o's glorious Prada gown, any more than we should pretend that celebrities don't invite commentary about what they wear and how they look on the red carpet. Fashion is beautiful. Dresses are beautiful. There's nothing wrong with celebrating that -- as an aspect of a larger event that happens to be about the work these individuals do, not the ensembles they wear.

And that's why the clothes and the hair and even the manicures aren't the real problem. The problem arises when interviewers can't think of anything else to talk to a woman about than what's in her purse. It's when, as Jennifer Garner noted after a press junket last year, "Every single person who interviewed me — and I mean every single one -- asked me: 'How do you balance work and family?'" But when her husband, Ben Affleck, returned from his "Gone Girl" junket, "He said that no one asked him about it that day. As a matter of fact, no one had ever asked him about it. Not once." And as Emma Stone said in a 2012 interview she did with Andrew Garfield, "You get asked interesting, poignant questions because you are a boy."

When you are a woman who commands millions of dollars to act, when you can get designers begging to custom-make dresses for you, and when you're among the very fortunate, very few people in your profession who do get to dress up fancy because your work has been singled out for the highest recognition your industry offers, then a degree of commentary about how you're dressed for it may just have to come with the package. That does not mean, however, that you should be exclusively confined to what Scarlett Johansson once famously referred to as the "rabbit food questions," or that you should be expected to have cameras crawling up and down your body. This week, Makers offered its suggestions for reporters to ask this year's Oscar nominated actresses that go beyond the usual "Who are you wearing?" Let's see if anybody gets around to asking them. Because "Who are you wearing?" isn't a bad query. It just shouldn't be the only one.