"Call your mom": How J.K. Simmons made an Oscar night cliché a rally cry for women

Why mothers were front and center Sunday night 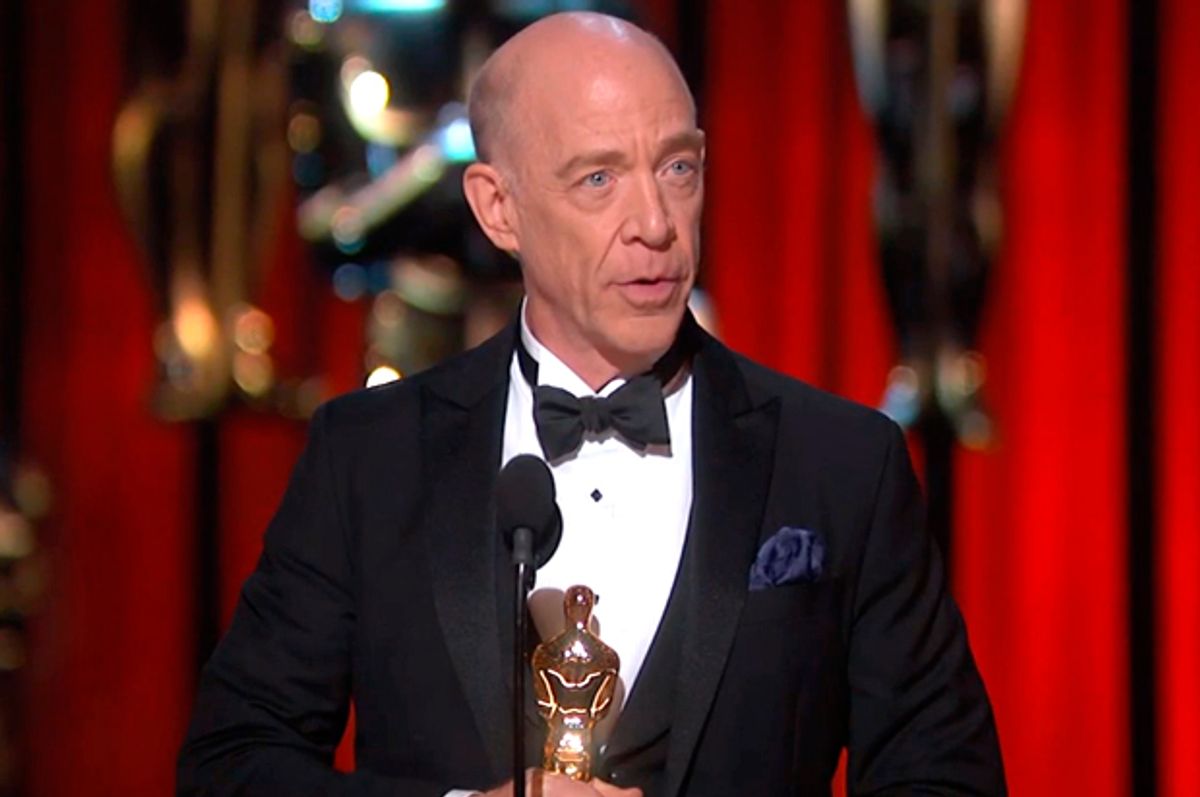 Thanks, mom. It's a prizewinner speech cliché. But on Sunday night, it became something a little bigger. It became a rallying cry.

For an Academy Awards show that was near epic in its stupefying dullness, in the somnambulant appearances of so many of the presenters, this year's show still managed to deliver some breathtakingly moving moments -- and some powerful social messages. There were Common and John Legend, following up a show stopping performance of the song "Glory" from "Selma" with their impassioned acceptance speeches, acknowledging that "That right now, the struggle for freedom and justice is real." There was "Birdman" director Alejandro González Iñárritu's prayer for "my fellow Mexicans" – after Sean Penn preceded the announcement of his film's win with the question "Who gave this guy a green card?" -- that "I just pray that they can be treated with the same dignity and respect as the ones who came before and built this incredible immigrant nation." There was "Imitation Game" screenwriter Graham Moore's admission of a suicidal period in his teen years, and his directive to other struggling kids to "Stay weird and stay different." But in the midst of all those socially conscious messages -- as well as speeches that touched on awareness for ALS and Alzheimer's -- there was another voice to be heard as well. The one that says, listen to your mother.

You got an early sense of it on the red carpet, when supporting actress nominee Emma Stone appeared with her date for the evening, her mother. Ansel Elgort likewise brought his mother. Presenter and "50 Shades of Grey" star Dakota Johnson cane with her mom too – 1988 Best Actress nominee Melanie Griffith. And the show was not too long under way when J.K. Simmons, picking up his expected supporting nod for "Whiplash," did something unique. He started his speech not with an expression of gratitude to the Academy, or the filmmakers, but to his wife. He then thanked his "above average" children, calling them "Smart, funny, kind, loving people -- and that’s because you are a reflection of your mother." Then, for the kicker, he said, "Call your mom, everybody. I’ve told, like, a billion people or so. Call your mom, call your dad. If you’re lucky enough to have a parent or two alive on this planet, call them. Don't text. Don't email. Call them on the phone. Tell them you love them, and thank them, and listen to them for as long as they want to talk to you." It damn near brought down the house.

But what did bring down the house, what had Meryl Streep and Jennifer Lopez cheering like their team just won the World Series, was Patricia Arquette's fiery acceptance speech for her supporting win for "Boyhood," in a role credited simply as "Mom." "To every woman who gave birth to every tax payer and citizen of this nation," she said, reading her notes through her mom glasses, "we have fought for everybody else’s equal rights. It’s time to have wage equality once and for all, and equal rights for women in the United States of America!"

It was a rousing, sincere moment that predictably spawned an instant contrarian New Republic piece about "the problem" with Arquette's words, and a suggestion from Lena Dunham of "PATRICIA 4 PREZ." It was a notable dig at an industry in which a top female film studio executive recently said that "Women shouldn’t work for less money" after a hacking scandal revealed she was paying women less money. And it was for Arquette the culmination of over a dozen years of devotion to a project that many critics said was radical simply for depicting a woman growing credibly older. It was also the evening's biggest shoutout to the nation's hard working mothers.

This being the film industry, of course that sentiment couldn't hold for the length of an awards show. Yes, the filmmaker's of the Oscar-winning short "The Phone Call" also thanked their "mums," but by the time Alejandro González Iñárritu picked up his little gold man for "Birdman," he had to be reminded onstage to thank his wife. And in the end, race for Oscar recognition boiled down to a race between a movie with "Boy" in the title and one with "Man" in it.

It should also be mentioned that the reality of parenthood is cannot be neatly summed up in an actor's speech. Simmons' presumption that if you have "have a parent or two alive on this planet," that automatically makes you "lucky" is sweet but deeply simplistic. For plenty of people who've survived abuse or neglect or just run of the mill dysfunction, a living parent is not a blessing at all. Likewise, Arquette's assumption that motherhood can be defined by "every woman who gave birth" leaves out a whole lot of caring, wonderful mothers who didn't earn the title by pushing a baby out of their bodies.

Yet the messages of Simmons and Arquette were still powerful and positive. They offered validation -- on an evening in which an industry run by middle-aged men handed out its highest prize to a film all about a middle-aged man who works in the entertainment industry – of the special value of the moms out there who are doing it right. It was an expression of gratitude and love. It was a "Thanks, mom" that came with stern, clear directives – to appreciate the loving, supporting parents out there in our families, and to demand equal pay and equal rights for all of them. And while those are welcome sentiments on a Sunday evening, the real test of those ideals, for a whole lot of working families in this country, comes out in the real world, every Monday through Friday.