"Fight for us now": What Patricia Arquette got right (and wrong) about equal pay

Arquette's heart was in the right place, but her comments flattened the struggles of women of color and LGBTQ women 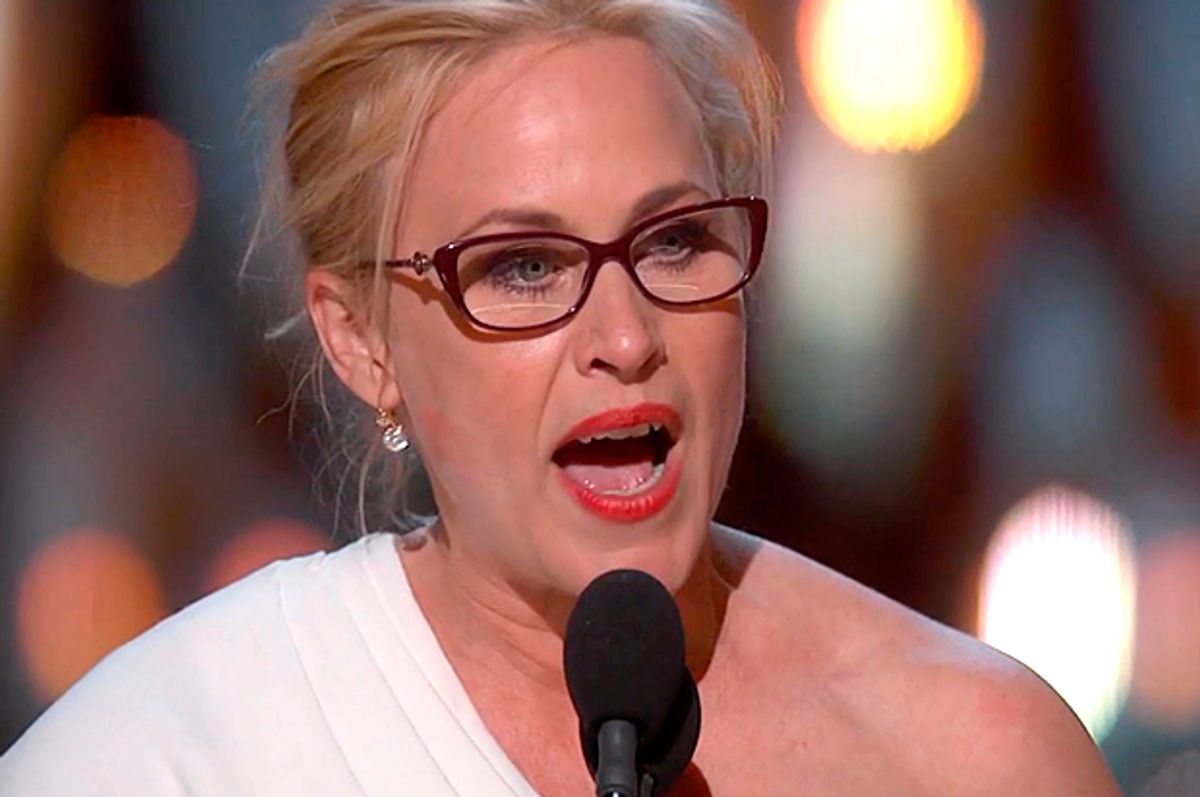 Patricia Arquette took home an Oscar for her performance in “Boyhood,” and her acceptance speech brought the audience to its feet (and inspired Meryl Streep and Jennifer Lopez to freak out in the best way possible). “We have fought for everybody else’s equal rights,” she said. “It’s our time to have wage equality once and for all and equal rights for women in the United States of America.”

Once offstage, Arquette expanded on her initial remarks, telling reporters:

It's time for women. Equal means equal. The truth is the older women get, the less money they make. The highest percentage of children living in poverty are in female-headed households. It's inexcusable that we go around the world and we talk about equal rights for women in other countries and we don't. One of those superior court justices said two years ago in a law speech at a university that we don't have equal rights for women in America and we don't because when they wrote Constitution, they didn't intend it for women. So the truth is even though we sort of feel like we have equal rights in America right under the surface there are huge issues at play that really do affect women. It's time for all the women in America, and all the men that love women and all the gay people and all the people of color that we've all fought for to fight for us now.

It's clear that Arquette wanted to use her speech to talk about economic justice, and that’s a good thing. (And she will forever have my heart after her performance in "True Romance.") The problem with her speech was simply that it was narrow. Her framing didn't touch on the realities of the wage gap, and her later remarks flattened the fact that people embody multiple identities at once. This kind of thing isn’t a hazard of when celebrities get political, it’s a hazard of when any person doesn’t think expansively and intersectionally about their politics.

And in a speech that is directly about equal pay, Arquette’s call for solidarity from “all the gay people and all the people of color” ignores the fact that the wage gap for women of color and LGBTQ women is much, much worse than it is for straight white cis women.

Some numbers first. According to a breakdown of median weekly salaries from the Bureau of Labor Statistics, the gender pay gap is consistent across fields. Disparities between men and women's earnings exist in all but seven of the Bureau’s 600 listed occupations. Men who drive buses, prepare meals in cafeterias, run companies and watch your kids, on average, make more money than women who do the exact same work.

A quantitative analysis from the Government Accountability Office also found that the pay gap persisted between men and women even after factoring in part-time work and women working fewer hours or taking time off after they have children or when a family member falls ill. So Arquette is right about the pay gap being very, very real and badly in need of correcting.

But take a closer look at the gap and you'll find that the numbers often used as shorthand -- women earning 77 cents on the dollar -- isn’t reflective of the much starker wage gap faced by women of color. Black women who work full-time year round, on average, earn 64 cents on the dollar, and Latina women earn just 54 cents.

According to research from the Williams Institute, lesbian workers earn less than both straight and gay men. They also lack legal protection from being arbitrarily fired, harassed on the job and discriminated against in 29 states. Trans women also experience rampant pay discrimination. And in a majority of states, they are also denied the basic legal protections to ensure they can find and keep a job at all. (And these aren't neat or stable categories. A trans woman of color is forced to contend with multiple forms of discrimination that limit her earnings.)

More from the Williams Institute:

One study found that the earnings of female transgender workers fell by nearly one-third following their gender transitions. [...] This research strongly indicates that in addition to facing significant workplace discrimination in hiring and firing based on their gender identity, transgender women experience significant gaps in pay largely attributable to their gender.

Arquette’s comments also failed to address the realities of the labor and social justice movements organizing around these issues. According to data from the National Women’s Law Center, “the share of women of color in the 10 largest low-wage occupations (36.8 percent) is over 2.3 times larger than their share of the workforce overall (16.0 percent).” White women need to stand in solidarity with the women of color who are already organizing for fair pay, reliable scheduling and living wages -- not the other way around. (White women also need to stop voting against those interests.) It's essential that this kind of an intersectional analysis shape how we talk about equal pay, particularly when white women talk about equal pay.

John Legend started his Oscar acceptance speech with a comment on the role of artists in any movement for justice. “Nina Simone said it’s an artist’s duty to reflect the times in which we live,” he said. Taking that to heart, he used his time onstage to draw a continuous line from the civil rights struggle of 50 years ago to the civil rights struggle happening right now in plain terms about voting rights and the mass incarceration of black men in America.

Arquette’s speech, well intentioned though it may have been, did not fully reflect the times in which we live. If we want equal rights for women in the United States, accuracy and honesty in how we talk about the women who are already fighting that fight -- and the movements that intersect in that struggle -- is the first step.