Scott Walker's cunning "stumbles"? Why the dullard may actually be a political savant

Sure, Rudy Giuliani has become the Donald Trump of this election cycle. But Walker’s screwups may reflect strategy 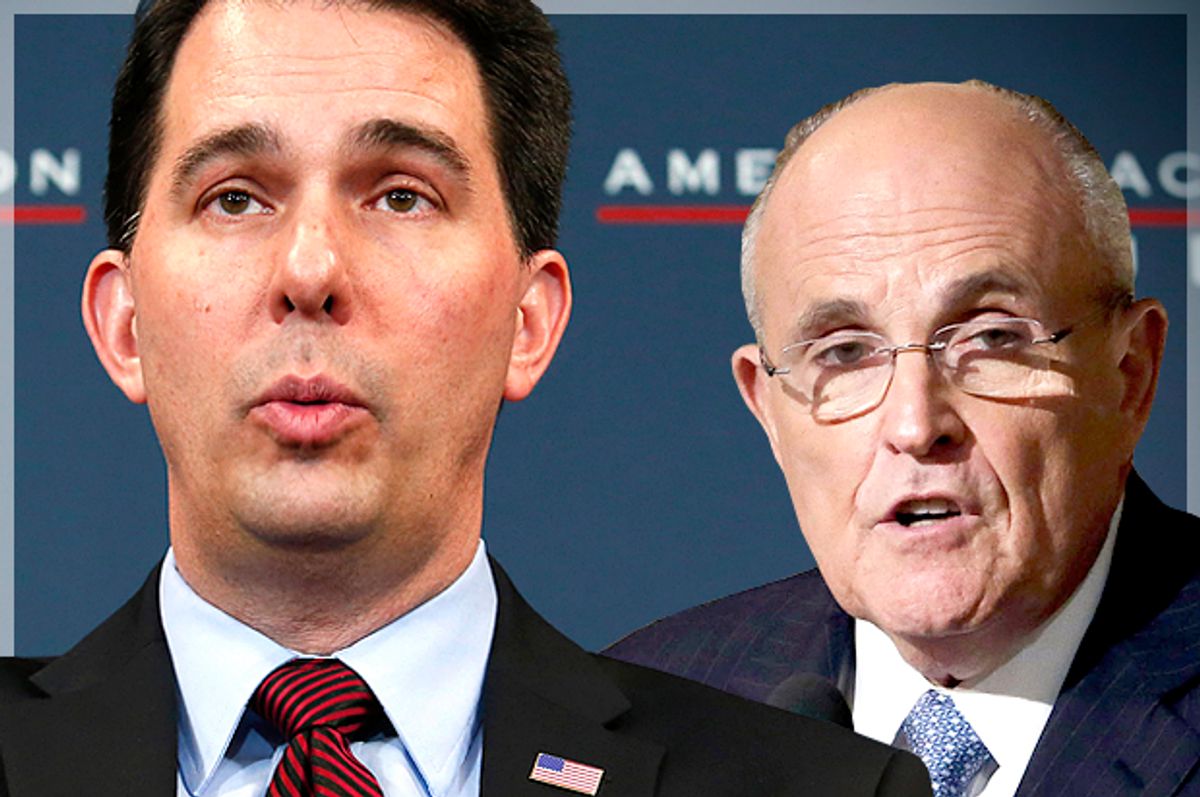 A year away from any feedback from actual voters, it’s hard to resist analyzing the 2016 GOP presidential race in terms of 2012. We already know Rudy Giuliani is the Donald Trump of this cycle; “America’s mayor” has soiled himself with his hateful musings about President Obama. But the other characters are tougher to cast at this point.

It’s been tempting to see Scott Walker’s recent rise as the kind of temporary surge virtually every Republican enjoyed in the last cycle -- the measure of a weak field, not a strong candidate. His stumbles in the last few weeks – on Syria, on evolution and most recently, on handling Giuliani’s Obama comments – at first confirmed that for me.

But now, watching Walker raise money off the Giuliani controversy, it’s possible to think maybe there’s cunning behind his dull-eyed refusal to say whether he thinks the president is a Christian, or loves America. Walker and his team seem to believe they can create a new position in the GOP primary field: the right-wing establishment candidate. That may seem like an oxymoron, since “right wing” and “establishment” candidates have been distinct in prior cycles. But Walker thinks he has the strength to run to Jeb Bush’s right in the GOP establishment primary: to compete for donors, and the love of the party base, too.

Pundits, including some conservatives, spent the weekend harrumphing first over Walker’s refusal to distance himself from Giuliani, and then over his trafficking in “Muslim/Kenyan/socialist” nonsense, by refusing to say whether he believes he’s a Christian. Dana Milbank insisted the Wisconsin governor’s mealy-mouthed response to Giuliani “ought to disqualify him as a serious presidential contender.” Matt Lewis called his claim that he doesn’t know if Obama is a Christian Walker’s “terrible, horrible, no-good very bad answer,” and suggested, from the right, that it showed he “might not be ready for prime time on the national stage.”

The arbiter of political propriety, Ron Fournier, seemed to agree:

But what if Walker is hitting just the right notes, to get the right kind of attention, in the opening days of a crowded primary campaign? His team seems to think so, sending a fundraising email hyping the conflict – a conflict Walker has publicly insisted is unimportant. Friends of Scott Walker puts it this way:

He refuses to be drawn into the sideshow of answering pointless questions about whether and how much President Obama loves our country… Now is the time to stand up against the publicity hounds and the journalistic pack, and help Governor Walker fight back.

As Jamelle Bouie noted in Slate, Walker has shown a keen instinct for picking the right battles and making the right enemies. What liberals like me think of as over-reach, from his attacks on collective bargaining in 2011 to his assault on the University of Wisconsin system in 2015, makes the GOP base, as well as much of its donor base, very happy. After moderating, a little, on social issues while running for re-election last year, he’s moving hard right now, expressing support for a personhood amendment, according to anti-choice activists.

As someone who’s long underestimated Walker’s political skills, at least in Wisconsin, maybe I’m overcompensating in seeing genius in what first seemed like political mis-steps. I still think the governor and his record will wither under the harsh light of national media attention. And if Walker seriously emerges as a threat, look for the Bush political empire to take him down. They have plenty of ammunition. But Walker certainly has fundraising chops; before Giuliani stepped on his storyline, the big Walker news was the inroads he’d made into Chris Christie’s Wall Street territory.

In the last two presidential cycles, the (comparatively) “moderate” establishment candidate won the nomination, to the chagrin of the right-wing party base – first Sen. John McCain, then Mitt Romney – at least partly because the conservative candidates shot at one another. This time around, Bush could have Walker shooting at him in the establishment lane. It could get interesting.