Farewell to "Parks and Recreation," the quirky comedy that bet on its cast and won

By constantly shuffling the deck in its ensemble, “Parks and Recreation" found its sweet spot 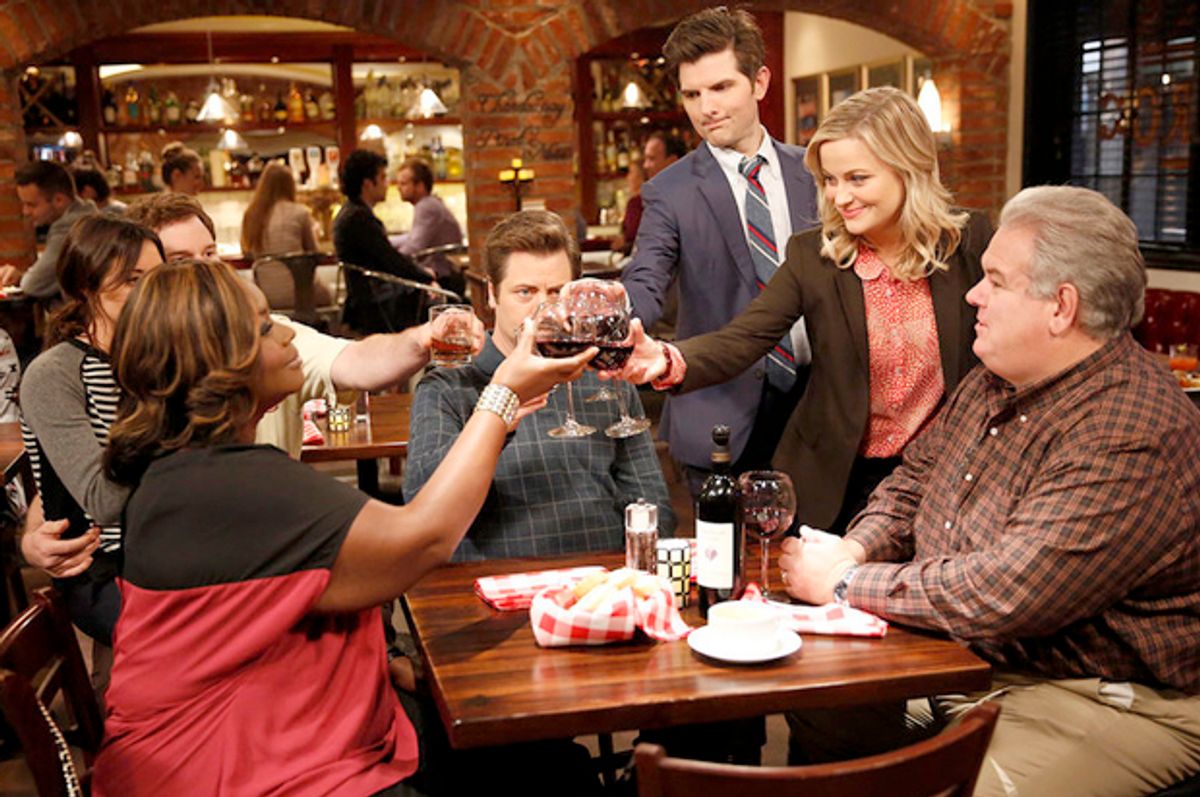 If you look back at the first season of “Parks and Recreation” now, it really does feel like an entirely different show. Amy Poehler's Leslie Knope is brash and bumbling instead of lovable and self-assured, while the characters that orbit her feel like part of some bizarro alternate universe: Her love interest isn’t Adam Scott's goofy Ben Wyatt, it’s uptight city planner Mark Brendanawicz (played by Paul Schneider). Chris Pratt is a mere guest star — and sort of the show’s antagonist (!?) — and he’s dating Rashida Jones' Ann. Ron Swanson wears a tie. Jerry/Garry/Larry/Terry and Donna are essentially glorified office furniture. There is no Rob Lowe. Lil’ Sebastian is nary but a twinkle in co-creators Mike Schur and Greg Daniels’ eyes.

The strength of “Parks” has always been in its ensemble and the relationships between the core group. All of the characters are fully fleshed-out individuals instead of sitcom composites, and the joy comes from seeing them play off each other in different ways. There really are no weak links here; unlike some shows, which have subplots you just don’t enjoy watching, I enjoy watching Tom and Donna on a shopping spree as much as I like Andy and April's adventures or seeing Leslie and Ron duking it out about the role of government. Chances are, your favorite character is different from the person sitting next to you’s favorite character, and that's what makes the show so broadly appealing.

There’s a lot of reasons “Parks" improved since that first season: Better writing, more evolved characters, and simply growing up and coming into its own. But “Parks” also, much more than some shows, felt free to change up its ensemble. This sort of flexibility was built into the show to begin with; as Mike Schur explained in an AV Club interview, “We didn’t really have a character for Jerry at the beginning. Or Donna. We just liked those actors and figured we’d work it out later. So we threw them in desks—this is something Greg [Daniels] had a lot of success with on 'The Office': Just populate the world with other people, and let those characters naturally develop.”

It’s safe to say, the success of “Parks” proves that more shows should be willing to diverge from their pre-ordained starting lineups. The show cut characters that weren’t working and made more space for those that were. They let the characters grow into the best version of themselves, and in doing so, they found a sweet spot that few other ensemble comedies have managed.

Take the shuffling of Ann and Leslie’s love interests in the first few seasons. Initially, Ann was dating Andy, who was annoying and kind of mean, nowhere near the goofy, good-hearted guy we know today. Meanwhile Leslie pined after the incomprehensibly dull Mark Brendanewicz, who then moved on to dating Ann after she and Andy split. None of these cast pairings really landed, either on a fictional or a creative level. Ann and Andy never made sense as a couple, while Mark didn't really fit into the future that the show was building towards — as Vulture’s Nate Jones puts it, “he doesn't make sense in the bright and zany Pawnee of latter-day Parks.”

So "Parks" switched things up. Come season three, Brendanewicz was out, Andy was dating April, and Rob Lowe and Adam Scott had been thrown into the mix. It’s here that the show really started to come into its stride. Andy and April both became more fun when they got together, acting as each other's yin and yang. Together they proved that playfulness, not seriousness, could form the basis of a truly epic love story. Adding Scott and Lowe was similarly a stroke of genius; the pair ranks up there with Ed Helms on the "Office" and Danny Devito on "Its Always Sunny in Philadelphia" as the best post-launch cast additions ever. Chris Traeger and Ben Wyatt carved out their own niche within the show, and helped to recalibrate the relationships amongst the show’s key players. Rob Lowe, best known for dramas, created a timeless comedic character with the upbeat Chris, heightening the positive energy that would become the show's trademark. Meanwhile, Scott's Ben ended up being the perfect love interest for Leslie. A bit of a straight man, like Paul Schneider, but not such a straight man that he didn’t have his own charming follies and quirks, this role allowed Scott to showcase the sort of deadpan comedy that “Party Down” fans already loved him for. What’s more, Ben really helped Leslie blossom as a character. It's this kind of positive growth that truly sets "Parks" apart: The characters actually change for the better over the course of the show. Like the pairing of April and Andy, Leslie and Ben were a couple that allowed one another to shine, and that upended the traditional sort of sitcom-couple scenarios we see on TV.

Over the course of seven seasons, the show allowed the actors to find their own rhythms and for minor characters to come into their own. Where characters like April and Ron could have been a collection of funny quirks masquerading as actual people, they developed into nuanced and lovable individuals in the hands of Aubrey Plaza and Nick Offerman (nobody can argue this was a poorly-cast show). Pretty much every cast member has developed an off-screen cult following, too — as their roles grew, fans responded -- and the synthesis of all these strong comedic personalities has benefited the show in turn. Early on, the producers wisely gave Chris Pratt more to do, allowing him to play to his strengths and clearly picking up on the charisma and lovability that would see Pratt transformed into one of the world’s biggest action stars by the show's end. Meanwhile, Jerry and Donna were allowed to become integral members of the gang, and as a result, yielded some of the show's funniest and freshest storylines. What would the show be without Retta's sass or Jim O'Heir's sweet haplessness? "Parks" leaned on its cast and followed the funny, instead of trying to impose humor from above.

And “Parks" also wasn’t afraid to say goodbye. When Ann and Chris weren’t working anymore, the show sent them packing. Their storyline had gone stale (some would certainly have argued in favor axing Ann even earlier) and the “Parks” creators had the foresight to realize the show would be freer without them. And it was: Characters like Donna were really given room to flourish, while the Springfieldian kaleidoscope of minor characters in Pawnee — Jean-Ralphio Saperstein, Joan Callamezzo, Perd Hapley, Councilman Jamm, Tammy 2, Bobby Newport, and on and on — continued to develop and expand. The relationships we cared about on the show grew even stronger.

Now we have to say goodbye to the gang for good, and at this point, it feels like bidding farewell to old friends. It may have taken a few tries to "Parks" to hit that sweet spot, but now that it has, boy: we do not want to see them go.