Just let them kiss already: Why are TV shows so weird about male relationships?

From "The Big Bang Theory" to "The Odd Couple" reboot, a mild undercurrent of gay panic follows on-screen bromance 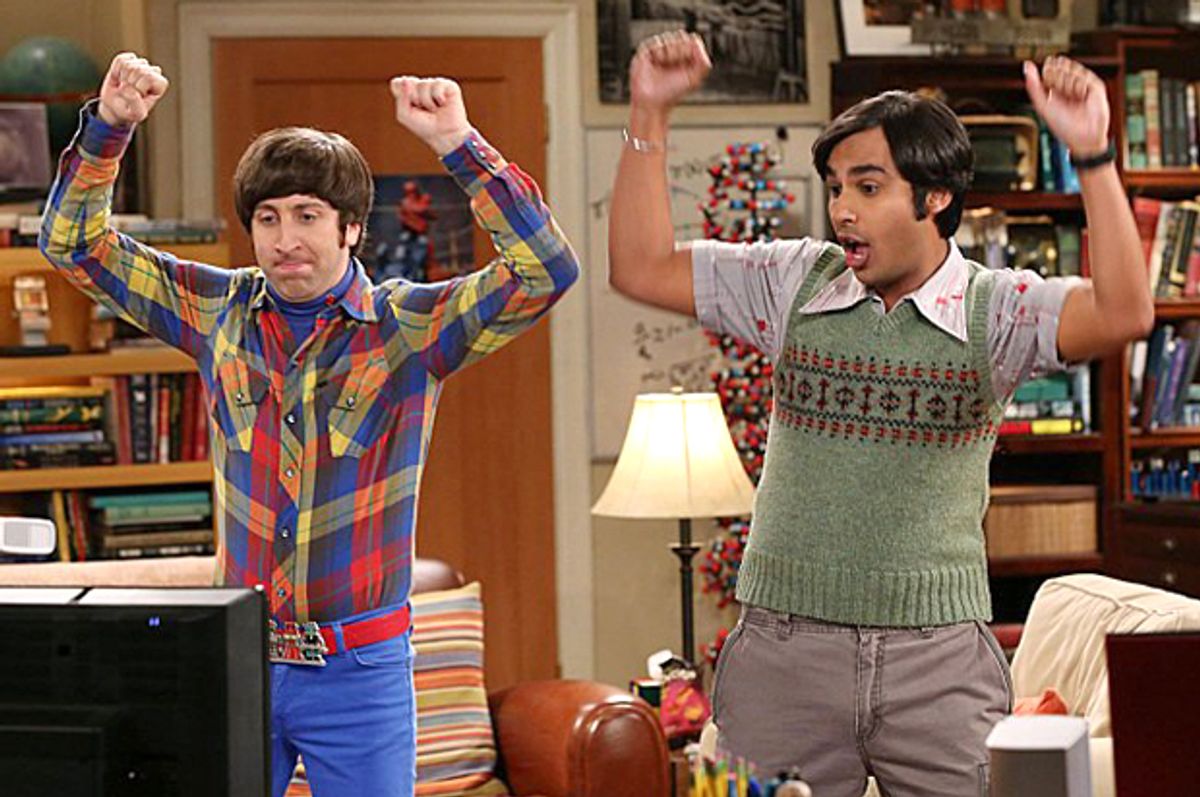 In the third-season “Louie” episode “Miami,” comedian and showrunner Louis C.K. has an unexpected, moving adventure while on a business trip to Miami. He’s out swimming on the beach, and a lifeguard who thinks he’s drowning rushes out to sea to save him. But that’s not the adventure, really. The adventure is that Louie makes friends with the lifeguard. The man—Ramon—ends up showing Louie a bit around Miami, and Louie is so taken with him that he impulsively extends his trip, so as to spend more time with this new friend.

But when Ramon learns that Louie’s extended his visit, he balks. He’s not interested in Louie like that. Ramon and Louie have an awkward, stuttering exchange where they both try to assert that they are not gay while not ever using the word “gay,” in an attempt to defuse the defensiveness and tension that has filled the room. Ultimately they can’t do it. Ramon says goodbye, and Louie is left alone for his last few days in Miami.

In the stand-up monologue Louis C.K. uses to close the episode, he reflects on the moment. “Heterosexual men have a big burden we put on ourselves, which is that we want to be identified as heterosexual men. We’re the only ones that care. We’re the only sexual group that gives a shit that we are not mistaken for anything else. Nobody else cares. I don’t know any women who are worried someone will think they’re a lesbian. I’ve never heard a gay guy say, 'Everybody’s gonna think I’m straight.' It just doesn’t happen. We’re the only ones that care. And it’s a drag for us, because—there’s a lot of things that we maybe could do, that might be nice, but we can’t, because someone will think we’re gay.”

If there was just one artifact of heterosexual masculinity to present to the court as evidence for Louie’s argument, it would be CBS’s “The Odd Couple”—a reboot of a reboot that is textually all about straightness and yet derives all of its humor and much of its plot from the specter of homosexuality. “The Odd Couple” comes to CBS via the hit ABC sitcom from the early ‘70s featuring Tony Randall and Jack Klugman—which was itself the successor to an “Odd Couple” film and the original “Odd Couple” play, by award-winning writer Neil Simon, which debuted in 1965. The premise is that two divorced men end up living together, falling into a couple-like bachelorhood. Oscar Madison is a macho slob; Felix Unger, a neatnik snob. Hilarity, high jinks and vague gestures toward homoeroticism ensue.

Despite debuting 50 years later, the new show has done little to update itself. CBS has literally remade a story from the era of “Mad Men” for modern audiences. And where the play, the film and the ‘70s show played with straightness and queerness within the narrow strictures of what popular culture could get away with at the time, the 2015 version does not even bother with opening the envelope, let alone pushing it in one direction or another. If anything, it’s even more blatantly reductive. Where the older iterations of “The Odd Couple” had to skirt around even using the word “homosexual,” it also could not dismiss Felix’s mannerisms as simply or merely “gay.” In its societally mandated restraint, the story asked the audience to accept a widening definition of masculine gender performance. Meanwhile, in the pilot of CBS’s 2015 version, which premiered last night, Matthew Perry’s Oscar destroys any available subtlety with the blunt force—“He seems extremely gay,” he says to a friend, “but he’s not.” The world of 1965 was one where it might make some sort of sense that two gay men would end up divorcing their wives and late in life create some sort of domestic partnership, even if they could never openly admit that’s what was happening. The world of 2015 is one where displays of affection and overtures of friendship between men have to be aggressively coded and labeled before they can be deemed “safe.”

Indeed, the story of male friendships on television is a strange one—particularly when those friendships are played up for comedic effect. As queer issues have entered the common vernacular, male friendships on television have engaged in a complicated dance of grandiose posturing followed by insistence that no posturing is happening at all. The anxiety around being possibly mistaken as gay has led to what feels like infinite television plotlines that play with the humor of two straight men in a domestic partnership and zero that lead to two men ending up in a romantic relationship (giving “no homo” a new meaning).

So, for example, the humor of Mac and Dennis’ codependence in “It’s Always Sunny In Philadelphia” comes from Mac’s not-that-implicit sexuality and Dennis’ rather explicit sociopathy; they’re both so hopelessly mired in the norms of hetero masculinity that they can’t see their incredibly intimate relationship as something more than bros. The humor from Nick and Schmidt’s codependence in “New Girl” is a little different; more than being in denial, the show derives comedy from just how domestic the two roommates and best friends are with each other.

Then there’s the more sinister kind of bromance—where the fear of signaling homosexuality is not just the anxiety fueling the comedy, but the punch line itself. The most obviously homophobic of these are Raj and Howard in “The Big Bang Theory,” where the story has repeatedly circled back to their intimate relationship as a form of “ersatz homosexual partnership,” as Leonard’s mother diagnoses them. And when I say “homophobic,” I do literally mean “phobic”; the show repeatedly uses Howard and Raj’s “odd” “coupling” to milk hysterical laughs from the audience, but whenever being gay is advanced overtly, Howard and Raj freak out. This, while the openly gay Jim Parsons is in the show’s lead role, while his character, Sheldon, is so desexualized as to be essentially asexual. There is just a bit of cognitive dissonance going on here.

Writers in the LGBT community have dubbed this type of thing “queer-baiting”—where a show puts two same-sex characters in an intimate partnership and plays up their chemistry but then insists, on-screen and off-, that the relationship is purely platonic. It’s a calculated doublespeak; the obvious chemistry snags the fans who are interested in the queer relationship, but the show can distance itself from homosexuality at a moment’s notice. This happens with female and male relationships—Angie Harmon of “Rizzoli & Isles” has come out on the record about “do[ing] a take for that demo”—but given how difficult it is for men to be friends on television without this coming up, it seems significant that some of the best examples are of men in close partnerships: BBC’s “Sherlock,” the CW’s “Supernatural” and MTV’s “Teen Wolf.” It’s “Sherlock,” in particular, that has the most in common with “The Odd Couple.” Here’s another show about two unlikely roommates who seem, most of the time, to be polar opposites; here’s another show written in an era where men in general had more privileges, but couldn’t be gay in public. And here’s another show that struggles with the difference between friendship and romance, especially as it applies to men today.

CBS’s “The Odd Couple” stars Thomas Lennon as a very capable Felix and Matthew Perry—the network sitcom’s version of “always a bridesmaid, never a bride”—as a less believable but adequately charming Oscar. They have good comedic chemistry and a ridiculously fantastic apartment (that kitchen alone!). But the show just exists on the surface of what is quite a complex current phenomenon—the fraught bromance, in a world where male friendship is so coded as gay that we needed to invent a portmanteau for it. As Willa Paskin of Slate put it, “The new The Odd Couple has no rhythm, mostly for fear of showing two men dancing together too well.”

“The Odd Couple” would be a lot less frustrating if it had just shaken up the formula a bit more. I’m reminded of one of the sitcom greats, “Frasier,” which incorporated the intimacy, wit and restraint of a theatrical comedy of manners into the sitcom format. Unlike its predecessors in theater, “Frasier” was aware of homosexuality; one of the interesting struggles of the show was baked into the casting of David Hyde Pierce as Niles Crane. Pierce is extraordinary in the role—it really couldn’t have been done better by anyone else—as a man who is coded simultaneously gay and straight, much like Tony Randall as Felix in “The Odd Couple” on ABC. Part of the humor of “Frasier” derives from knowing Pierce is gay and laughing at Niles pining after women, even though the show at times also uncomfortably mocks and stereotypes homosexuality.

But where other shows have played up perceived queerness by building contrast (“The Odd Couple), or creating subplots that serve to shame the characters (“The Big Bang Theory”), “Frasier” took a different tack; Kelsey Grammer’s Frasier Crane was almost identical to Niles in taste and mannerisms, because, indeed, the two were brothers. It allows them to show neurotic, codependent love for each other while sidestepping the nagging question of romance. It works well, and it’s a great show. What strikes me is how many safety measures we require our on-screen men to put into place, merely so that they may demonstrate, and receive, and even enjoy the simple human pleasure of affection.