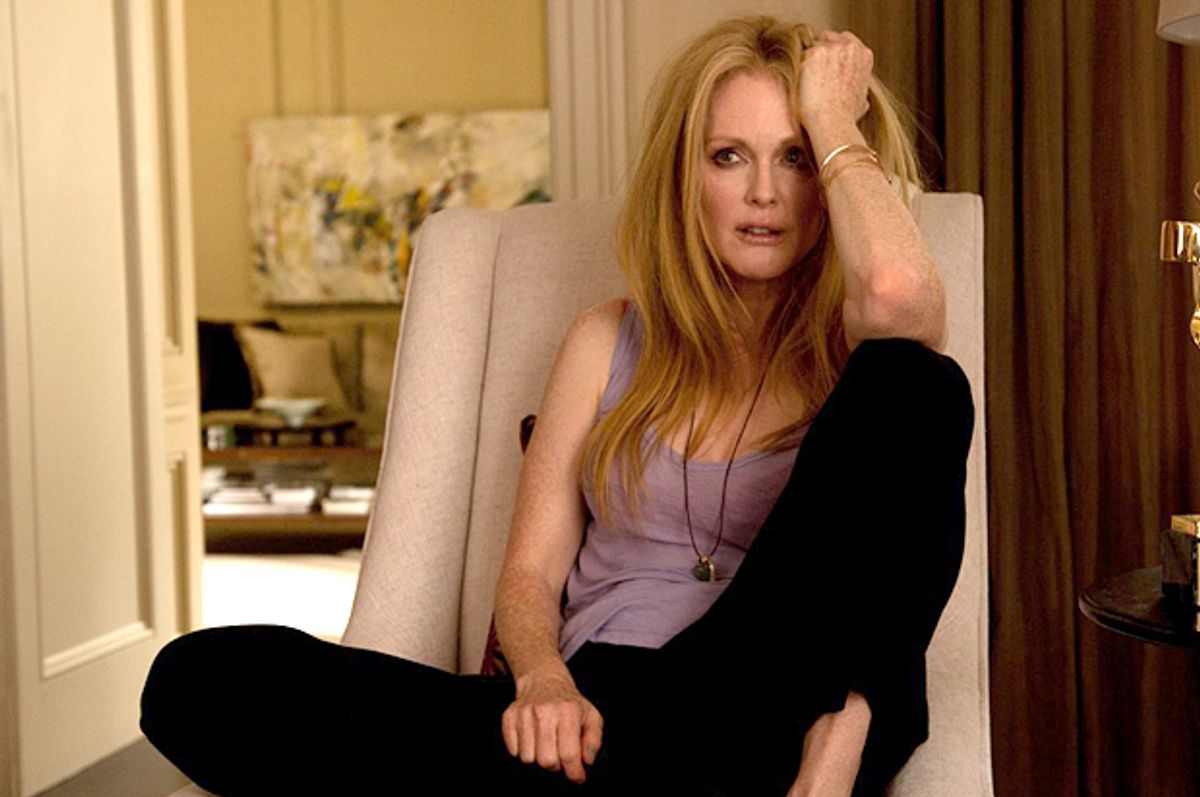 Julianne Moore in "Maps to the Stars" (Focus Features)
--

There’s an entire dissertation to be written, out there somewhere, about the post-horror career of David Cronenberg, the groundbreaking director who single-handedly put Canada on the cinematic map while bridging the gap between visceral terror, social satire and art-house intellectualism. Indeed, there are numerous potential versions of that learned treatise, fueled by different interpretations. Cronenberg’s complicated dance with mainstream cinema -- the road that led him from “Shivers” (aka “They Came From Within”) and “The Brood” through “The Fly” and “Crash” and “A History of Violence,” with such seemingly anti-Cronenbergian detours as “M. Butterfly” and “A Dangerous Method” -- is controversial, and doesn’t fit into any simple career narrative.

Any way you slice it, Cronenberg’s highly acidic new Hollywood satire, “Maps to the Stars,” with its surprising and terrifying performances from Julianne Moore and Mia Wasikowska, feels like an important moment in that trajectory.

Let’s start with the obvious fact that all of Cronenberg’s 21st-century films  -- and nearly all of them since the mid-1980s -- have been collaborations and/or adaptations. His personal-demon explorations as a revolutionary horror auteur basically ended with “Videodrome” in 1983; he’s been doing other things much longer than he did that. “Maps to the Stars” represents his long-delayed collaboration with screenwriter Bruce Wagner -- also the author of a series of satirical novels set in and around the movie business (the best known are “I’m Losing You” and “I’ll Let You Go”) as well as the script for the cult 1990s miniseries “Wild Palms,” a deeply strange and deeply flawed work that was years ahead of its time. (And which clearly bore the influence of “Videodrome” in particular and Cronenberg’s aesthetic in general.)

I defer to almost no one in my Cronenberg fandom; I’m happy to defend even the movies his other fans don’t like. “Spider” and “Eastern Promises” are both severely underrated, for instance, and shooting “Cosmopolis” on Toronto locations that looked nothing like New York City yielded a surreal quality that may not have been entirely intentional. The best way to sum up my sharply divided response to “Maps to the Stars” lies in a single word in that last paragraph: “delayed.” This is essentially the same movie Cronenberg and Wagner tried to make years ago that fell apart (and became the basis for Wagner’s 2012 novel “Dead Stars”). If it had hit in the late '90s or early 2000s, this ruthless portrayal of the soullessness, self-hatred and self-pity of the entertainment industry – an endless feedback loop whose inevitable vanishing point is death – might have been right on the money, Zeitgeist-wise. In 2015, it feels a little recycled.

That said, there’s plenty of acrid, delicious, ultra-dark comic sizzle to be savored in “Maps to the Stars,” especially in newly minted Oscar-winner Julianne Moore playing a grasping, fading and thoroughly shameless actress named Havana Segrand, memorably seen here with her underwear around her ankles, complaining to her naïve new assistant (Mia Wasikowska) about opiate-related constipation. Wagner’s plot feels deliberately hard to follow, as if standing for the circuitous self-involvement of its characters, but here goes: Havana hopes to relaunch her career in a remake of an early ‘60s melodrama that made her mother famous (her mother having been a Natalie Wood-style starlet named Clarice Taggart who died young). As if that weren’t enough, Havana has recently done the talk-show therapy circuit to tell the world that Clarice sexually abused her as a child. Yes, maternal sexual abuse is so rare as to be freakish, but that’s the point, as Clarice’s ghost (Canadian actress Sarah Gadon, a Cronenberg regular) tells her unraveling daughter during late-night visits.

That’s not the only incest theme in “Maps to the Stars,” nor the only ghost. One of those ghosts is a live human being, that being Agatha, played by Wasikowska with a blank watchfulness whose true significance takes time to reveal itself. Agatha is fresh off the Greyhound bus from Florida and sends mixed signals: She’s innocent and star-struck, but has burn marks on her face and hands and a back-story that doesn’t quite add up. Even Jerome (Robert Pattinson), the dim and dead-eyed limo driver she briefly hooks up with, can tell that Agatha is bad news, which of course does not stop him from having sex with her. But Agatha isn’t exactly bad news, or she’s only bad news for bad people. One of Wagner’s points in this nihilistic and overdetermined universe is that Agatha’s brand of luminous insanity and quest for human connection at least reflect real emotions, while everybody else is devoted to a calculated performance of emotion that renders the real thing impossible.

It’s not clear at first what connection there may be between the stories of Havana and Agatha and the family of child star Benjie Weiss (Evan Bird), except that Benjie is almost a miniature Havana. A formerly beloved TV moppet with a worsening personality disorder and a tyrannical sense of entitlement, who first entered rehab at age 9, Benjie’s got one more shot and is on the verge of blowing it. His obsessive and tormented showbiz parents, played by John Cusack and Olivia Williams, are trying to keep the lid clamped down on way too many family secrets, while coaxing and cajoling Benjie, now a fully depraved 13-year-old, through his comeback role in a wholesome and thoroughly idiotic “Facts of Life”-style sitcom. Benjie sees ghosts too, most notably that of a terminally ill girl he recently visited in the hospital, in an orchestrated P.R. moment, and asked, “So how did you get AIDS?” She didn’t have AIDS.

(“Non-Hodgkins?” rages Benjie to his handler later. “What the fuck is that? If it’s not Hodgkins, what is it?”)

As I’ve suggested. I claim no dispassionate perspective when it comes to Cronenberg. Both his chilly and brilliant technical craftsmanship and his willingness to push and challenge actors into unfamiliar zones are alive in “Maps to the Stars.” There are some potent cinematic ghosts moving through this film too, most obviously the specters of Billy Wilder’s “Sunset Boulevard” and Roman Polanski’s “Chinatown.” (I gather there are some “Wild Palms” references too, although I didn’t spot them.)

Cronenberg doesn’t get much credit as an actor’s director, but he has learned how to calibrate and contain performances. While Moore goes full throttle as the thoroughly hateful but feverishly alive Havana, Wasikowska is cool, standoffish and clear-eyed as Agatha, the one character in this story who knows what she wants and how to achieve it. Cusack is clammily amusing as both the worst dad in the world and an unctuous self-help guru spouting solipsistic bullshit. When “Maps to the Stars” abruptly shifts keys into gruesome violence – yes, it has classic Cronenbergian qualities after all – it’s not as if that violence wasn’t already visible, just below the surface.

I have generally found that Cronenberg’s films yield greater complexity and richness with repeat viewings, and I should leave myself open to that discovery here. (OK, I’ve never seen his 1979 drag-racing movie, “Fast Company.” I bet I’d like it!) But while “Maps to the Stars” is a lot likelier to please his old-line fans than was the period costume drama of “A Dangerous Method,” it’s also the first Cronenberg movie I don’t especially want to watch again. Despite at least two unforgettable performances, an eerie atmosphere of deepening psychosis and satirical zingers that sometimes hit the mark, its cultural critique falls halfway between grossly exaggerated and hammeringly obvious.

Celebrity is empty and destructive, and devours the souls of those who spend their lives chasing it. Hollywood is a hotbed of incest, both figurative and literal. OK, sure. I don’t want to defend the entertainment industry from David Cronenberg, God knows, but does any possible viewer of “Maps to the Stars” see that as breaking news? Those are truisms and stereotypes, long ago absorbed by every reality-TV fan and every “Entertainment Tonight” viewer. The mass audience has already been inoculated against those ideas, in a way that cannot be overcome by the superior-minded editorializing of a Canadian filmmaker who has never worked in Hollywood and a writer Hollywood long ago spat out.