Rahm Emanuel's "huge embarrassment": What it means for liberals -- and America 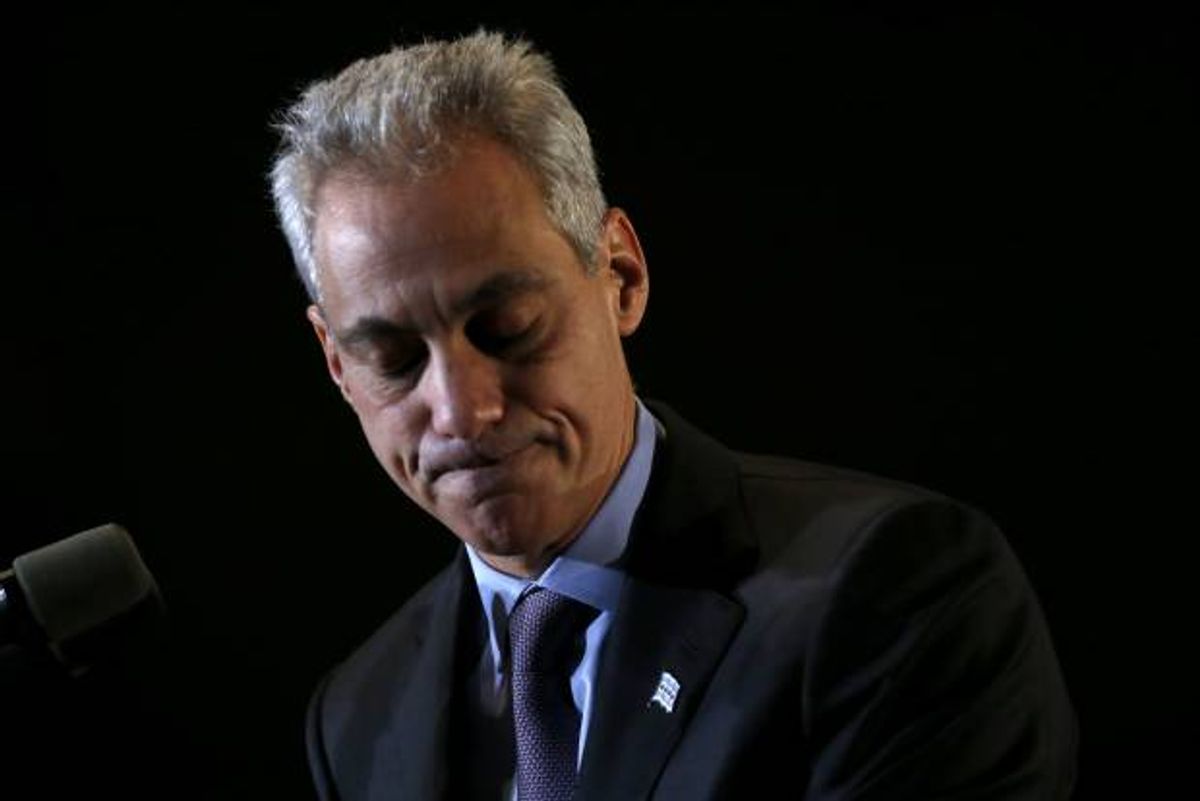 The liberal wing of the Democratic Party can be susceptible to the “moral victory” fallacy, which in its most degraded form considers a righteous loser preferable to a compromised winner. All the same, it’s hard not to interpret Chicago Mayor Rahm Emanuel’s Pyrrhic victory on Tuesday as a major win for the party’s economically populist wing. After all, this is Chicago we’re talking about; incumbent mayors expect to be crowned, not subjected to the indignity of actually campaigning for reelection.

Before I take another guess at the result’s implications, though, here’s a quick recap of Chicago’s unusually competitive mayoral campaign. If you look at the final results, you’ll see that Emanuel was far and away the most popular single candidate, logging 45 percent of the vote. That’s more than 10 percentage points higher than Jesus “Chuy” Garcia, the relatively unknown Cook County commissioner who came in second. But a key thing to understand about this campaign is that Emanuel’s securing a plurality was never in doubt. He never trailed in the polls, in fact.

The real question, instead, was whether he’d be able to win more than 50 percent of the vote, and thus avoid an April runoff election. Historically, this is something Chicago’s mayor has almost always accomplished with relative ease; it’s even more perfunctory than when an incumbent president “runs” in his party’s primary before the general election. Yet despite his national profile, the backing of the city’s formidable Democratic machine, an ungodly sum of money, and the support of his former boss (and fellow Chicagoan) President Obama, Emanuel fell short. Experts on Chicago politics described his failure as “a huge embarrassment.”

At this point, Emanuel’s imperiousness, brusqueness, overweening ambition is legendary. As then-Sen. Obama joked in 2005, when an accident in his teenage years caused the future White House chief of staff to lose a chunk of a middle finger, Emanuel was rendered “practically mute.” But as much as Emanuel’s interpersonal shortcomings have made him an unsympathetic figure, the mayor doesn’t find himself in his current predicament because he doesn’t mind his Ps and Qs. It’s policy, not personality, that Garcia’s backers should credit and Emanuel supporters should blame.

Because while the Democratic Party has more than its fair share of neoliberals — i.e., politicians who are socially liberal, fiscally conservative, and more reliant on the support of affluent professionals than organized labor – few are as brazen as “Rahmbo.” As Edward McClelland, Rick Perlstein and others on the left have noted already, Emanuel’s tenure as mayor has been defined by the kind of aggressive anti-union and pro-corporate initiatives that were once the exclusive purview of the GOP. And politically speaking, the fact that public union membership tends to be disproportionately African-American certainly didn’t help.

Indeed, even if the massive spike in violent crime of his first term, which disproportionately affected African-Americans, never happened, Emanuel would still likely find his relationship with the city’s minority communities on relatively shaky ground. Obviously, there was Emanuel’s high-profile battle with the Chicago Teachers Union, which the CTU ultimately won after staging an eight-day strike. But there was also his incredibly controversial decision to close 50 underachieving public schools, which affected some 30,000 Chicago students (90 percent of whom were African-American) and was seen by many as the first step toward a broader privatization of the city’s educational system. The “young people pretending to be old people” at the Economist may have loved these moves, but many of Emanuel’s constituents did not.

Of course, as encouraging as Emanuel’s stumble is to the left wing of the Democratic Party, it’d be the height of folly to declare victory over the “third way,” neoliberal approach just yet. Emanuel is quite likely to defeat Garcia now that the two are going one-on-one. And protest votes can have a way of making people think the battle’s been won, when in truth it’s only just started. Nevertheless, if we pair Emanuel’s hollow victory with other recent, successful campaigns from the left  — like Sen. Elizabeth Warren's thwarting of the Antonio Weiss nomination, or Zephyr Teachout’s humbling of Gov. Andrew Cuomo — it’s hard to deny that there’s a change happening within the Democratic base.

And for their own sake if nothing else, Hillary Clinton and the other national leaders in the Democratic Party would be wise to pay it attention.