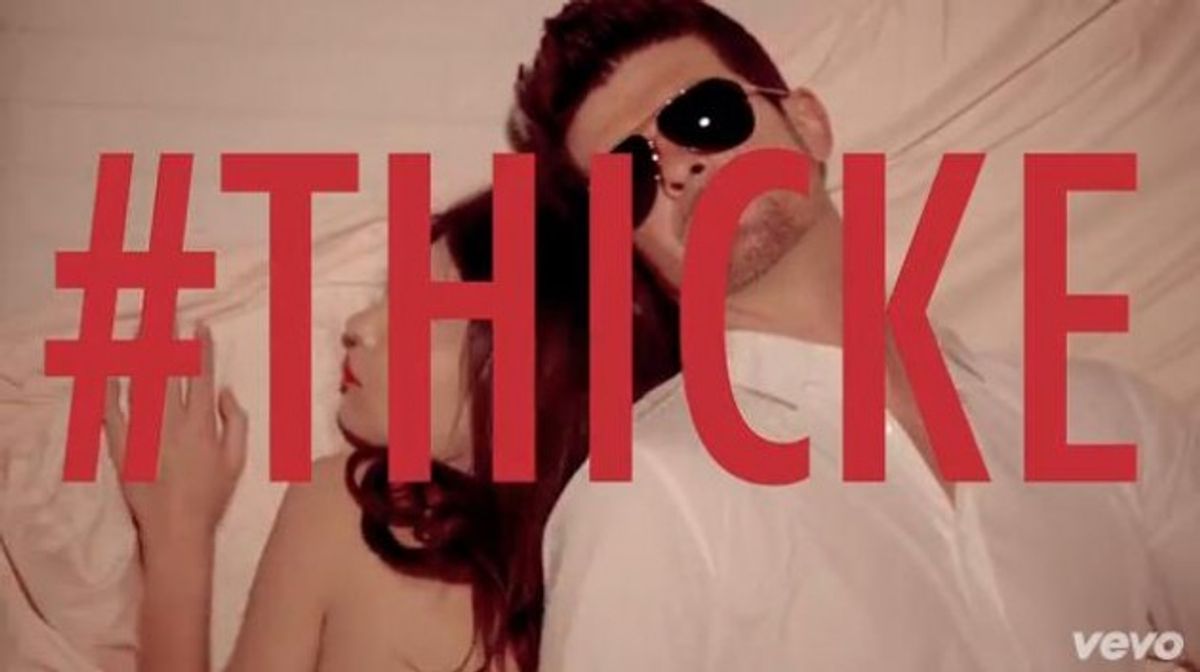 2013’s catchy song of summer “Blurred Lines” has been at the center of a fraught legal battle in recent months, with Marvin Gaye’s children alleging that Robin Thicke and Pharrell Williams plagiarized the song from Gaye’s 1977 hit “Got to Give it Up." The trial finally kicked off yesterday, with Thicke and Williams arriving in an L.A. federal courtroom to defend their creation. Here's a look at some of the major developments that brought us to where we are today:

August 2013
After Marvin Gaye’s family allege similarities between “Blurred Lines” and Gaye’s “Got to Give up,” Robin Thicke, Pharrell and T.I. file a pre-emptive suit against Marvin Gaye’s estate telling them essentially to quit it with their copyright infringement claims.

September 2013
Questlove defends Thicke and Pharrell in an interview with Vulture, saying: "Look, technically it's not plagiarized. It's not the same chord progression. It's a feeling. Because there's a cowbell in it and a Fender Rhodes as the main instrumentation — that still doesn't make it plagiarized. We all know it's derivative. That's how Pharrell works. Everything that Pharrell produces is derivative of another song — but it's a homage."

October 2013
In response to Williams and Thicke's suit, Marvin Gaye’s children Frankie and Nona Gaye file suit alleging that Thicke copied Gaye’s songs “Got to Give it Up” and “After the Dance” (for his track “Love and War,”) pointing to a series of interviews where Thicke talks about Gaye being an inspiration and pointing to his "Marvin Gaye fixation." The family also sues EMI, who works with both sides, for failing to protect Gaye’s work.

July 2014
A motion for summary judgment from Williams and Thicke's camp alleges that the claim only happened because "defendants smelled money” while ignoring “that the songs had no similarity in actual notes or phrases.”

September 2014
Gaye’s children produce a mash-up between the two songs for the judge to see the similarities, as well as hiring musicologists who lay out eight major similarities (the hooks, the bass melodies, the keyboard parts, the signature phrase in the main vocal melodies etc). The Gayes' bid for summary judgment reads: "Not only was it, therefore, Thicke and Williams who actually 'smelled money,' but it was they who then played the role of bully by suing Marvin Gaye's children when the Gaye children had the temerity to question why their father was not credited, or why 'Got to Give it Up' was not licensed, betting that the Gaye children would not have the will or resources to fight this battle. Thicke and Williams bet wrong, and they will now have to face the consequences of their misjudgment and their blatant copyright infringement."

September 2014
The Hollywood Reporter gets their hands on depositions given by Thicke and Pharrell the previous April, in which Thicke alleges that he was too high to actually write the song and Pharrell wrote most of it. As he says: "I was high on Vicodin and alcohol when I showed up at the studio. So my recollection is when we made the song, I thought I wanted… to be more involved than I actually was by the time, nine months later, it became a huge hit and I wanted credit. So I started kind of convincing myself that I was a little more part of it than I was.... But the reality is, is that Pharrell had the beat and he wrote almost every single part of the song.” Thicke also says he doesn't consider himself an honest person, and that all the media statements he gave surrounding the song should be ignored because "had a drug and alcohol problem for the year" and "didn't do a sober interview."

Williams’ testimony was equally bizarre, acknowledging he was in the "driver's seat" while writing the song before spiraling into a tangent about discrimination towards white artists in the music industry. You can read the whole sordid thing here.

October 2014
Judge John Kronstadt rules there is “sufficient showing” that “Blurred Lines” is similar enough to “Got to Give it Up” and a trial is scheduled for February 2015.

January 2015
The judge agrees not to play the original "Got to Give It Up” recording during in the trial, because the Gaye estate only owns the written sheet music, not the actual sound recording (a ruling based on the fact that the song came out before copyright law changed in 1978). “I love Marvin Gaye. My clients love Marvin Gaye. But this is not about his voice, his character, his charisma,"  said Thicke and Williams’ lawyer Howard King. "The question is whether ‘Blurred Lines’ is a copy of what he wrote in the sheet music. And it’s not."

February 2015
The court case kicked off today in L.A., with Thicke and Williams' lawyer Howard King playing the non-explicit version of the "Blurred Lines" video in his opening statement. “I’m not drunk on vodka or high on cocaine or Vicodin,” King reportedly also said referencing Thicke’s earlier claims about being high during the “Blurred Lines” sessions.

The Gaye’s lawyer Richard Busch warned the jury not to be fooled by Williams and Thicke’s charms, saying they "will wink at you and they’ll be charming. But keep one thing in mind. They are professional performers.”

Busch pointed out the discrepancies between Thicke and Williams' depositions and their media interviews, while King told the jury to ignore the media hubbub and focus on the depositions.

In addressing similarities between the two songs, King also spoke to the important distinction between Gaye's original sheet music and the sound recording. "The sheet music was only consulted a few months ago, after hundreds of thousands of dollars spent, and it was revealed that a lot of elements of the recordings are not in the sheet music," he said. "We're going to show you what you already know: that no one owns a genre or a style or a groove. To be inspired by Marvin Gaye is an honorable thing."

You can read THR's longer report of the trial here, which is supposed to last eight days and will feature testimony from Thicke, Williams, T.I., and Thicke's ex Paula Patton, as well as a number of professional musicologists.

Here are the two songs below. What do you think?