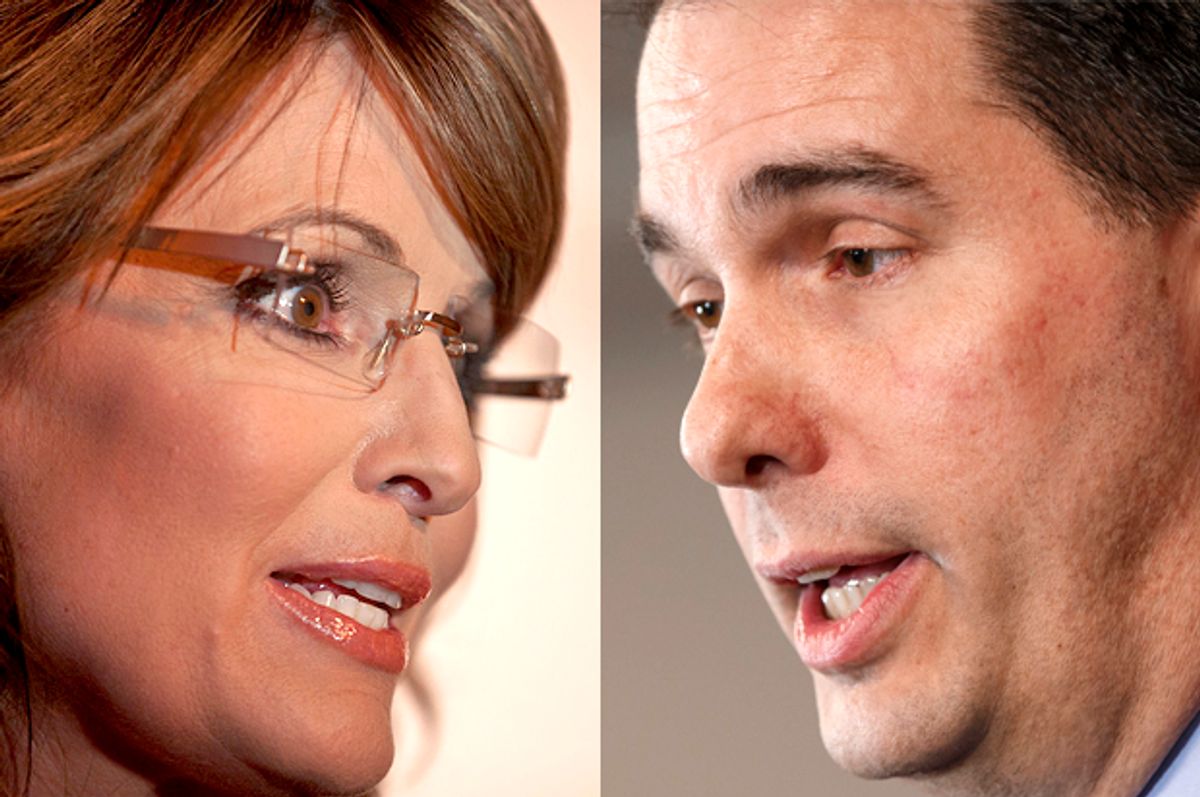 According to the Urban Dictionary a "Gotcha Question" is defined as a question that Sarah Palin is "too stupid to answer." For instance:

Charles Gibson: "Do you agree with the Bush Doctrine?"

Sarah Palin: "In what respect Charlie?"

Charles Gibson: "What do you interpret it to be?"

One could just as easily apply that particular definition to the man himself, President George W. Bush who, when asked what he thought tribal sovereignty meant in the 21st century replied:

"Tribal sovereignty means just that; it's sovereign. You're a -- you've been given sovereignty, and you're viewed as a sovereign entity."

He was king of the gotcha whiners and for very good reason. He had a hard time answering a lot of questions. However, he was justified in his whining in one respect. Before his presidential run in 2000, a gotcha question was almost always a "when did you stop beating your wife" kind of thing. Perhaps one of the most famous of gotcha questions was when George Bush Sr. was asked at a press conference out of the blue if he'd had an affair, thus making it clear that someone had said he had. And as everyone knows, questions about his marital fidelity swirled endlessly around Bill Clinton's 1992 campaign and beyond.

But there has probably never been a more clear-cut case of "gotcha" than the Gary Hart-Donna Rice episode. Hart was the presumptive front-runner for the presidential nomination and widely considered to be the intellectual leader of the new Democratic Party. As relayed in this fascinating recitation of the events, the press knew Hart was having a relationship with Rice and clumsily staked out his house, unwittingly revealing themselves to the candidate. Hart didn't know they had been tipped off to the relationship with Rice and stepped outside to confront them:

Hart may have surprised the reporters by choosing the time and place for their confrontation, but it’s not as if they weren’t ready. They had conferred on a list of questions intended to back Hart up against a wall — which was now literally the situation.

McGee reminded Hart that he and the woman had walked right past McGee earlier that evening on the way to his car. “You passed me on the street,” McGee said.

“I may or may not have,” Hart replied.

McGee asked him what his relationship was with the woman.

“I’m not involved in any relationship,” Hart said carefully.

So why had they just seen Hart and the woman enter the townhouse together a few minutes earlier?

And so it went. A picture of Hart and Rice on the boat called "Monkey Business" was eventually published and the rest is gotcha history.

But as you can see, the definition of the gotcha has undergone a subtle change over the years. Where it was once thought to be a question about their personal life or history designed to embarrass the candidate with the mere insinuation, today's gotcha is almost always a question rudely designed to test the candidate's knowledge of the issues and skill in navigating treacherous political controversies. (They can thank George W. Bush and Sarah Palin for that --- they made it obvious these tests were necessary.)

Scott Walker, for instance, was making the apparently requisite GOP primary candidate's pilgrimage to Britain where he was quizzed about whether or not he believes in evolution. He quite oddly replied that he was going to "punt" rather than try to answer. According to the right wing this is the worst kind of gotcha journalism because it is irrelevant and solely designed to embarrass the governor. His staff later released an anodyne statement saying that he believes there is no conflict between the Bible and science, which would seem an obvious enough answer for any American running for city council much less the presidency. It revealed that Walker wasn't quite ready for prime time.

More interesting, however, is the idea that such a question isn't relevant. It is certainly relevant to the evangelical community from which Scott Walker hails and from whom he will need to draw support in the primaries. The fact that so many Republicans consider asking about evolution to be a gotcha question is revealing. Evidently they believe that most Americans would find it embarrassing if their candidate said he believes what a substantial faction of their party believes. (They are,of course, right about that.)

But Walker's latest alleged victimization at the hands of the gotcha police is more interesting. When asked whether President Obama is a Christian he said he didn't know. Now anyone who has followed politics for the past seven years knows that the right-wing fever swamps are convinced that Barack Obama is a Muslim. They also know that he worshiped in the Christian church under the leadership of the Rev. Jeremiah Wright, but because they believe Wright is an America-hating black nationalist, it is further proof that Obama is actually a Muslim. (No, this doesn't make any sense.) Walker is a professional politician, the governor of a large Midwestern state and a card carrying member of the conservative movement. By saying he didn't know if the president was a Christian, it's fair to assume that Walker didn't want to make that "punt" mistake again and  thought he was being "mainstream" by not blurting out the president is a Muslim and simply saying he didn't know. This shows Walker needs to talk to some people other than Sean Hannity and Steve King.

The right has rallied to his side, shrieking about "gotcha" journalism and issuing philosophical treatises on epistemology. (Does anyone really know anything at all?) The best is this one from Charles C. W. Cooke:

As Soren Kierkegaard rather brutally observed, the question of what we mean by a “Christian” is extremely complicated, especially in a country in which most people claim to be devout.

(That's pretty funny coming from him as virtually every war hawk in the nation declares himself an expert on Islam...)

But as much as the "gotcha" may have devolved from an impertinent personal question designed to plant the idea that a politician is a naughty boy to a "question that Sarah Palin and George W. Bush are too stupid to answer" to a question that will make a desperate right-winger very nervous, there is a method to their madness and it's actually an evergreen strategy.

Yesterday I expressed scorn that the guy who’s endured all those famous death threats in Wisconsin can’t seem to summon up the courage to answer difficult questions. But perhaps Team Walker is planning to treat media hostility as another form of persecution, along with the death threats. It does scratch the culture-war itch without necessarily involving a controversial issue position.

There it is. The "liberal media" cri de guerre brings all the disparate threads of the conservative coalition together, from the persecuted social conservatives out on the front lines defending Christians against the marauding secularists to the poor scapegoated Masters of the Universe who are trying to make capitalism safe for rich people. (Not to mention the assault on the good name of that great patriotic combat journalist Bill O'Reilly ...)

That damned liberal media is once again making them look like fanatics and criminals by asking them questions about what they believe before they've had a chance to check with their handlers. How low can you get?