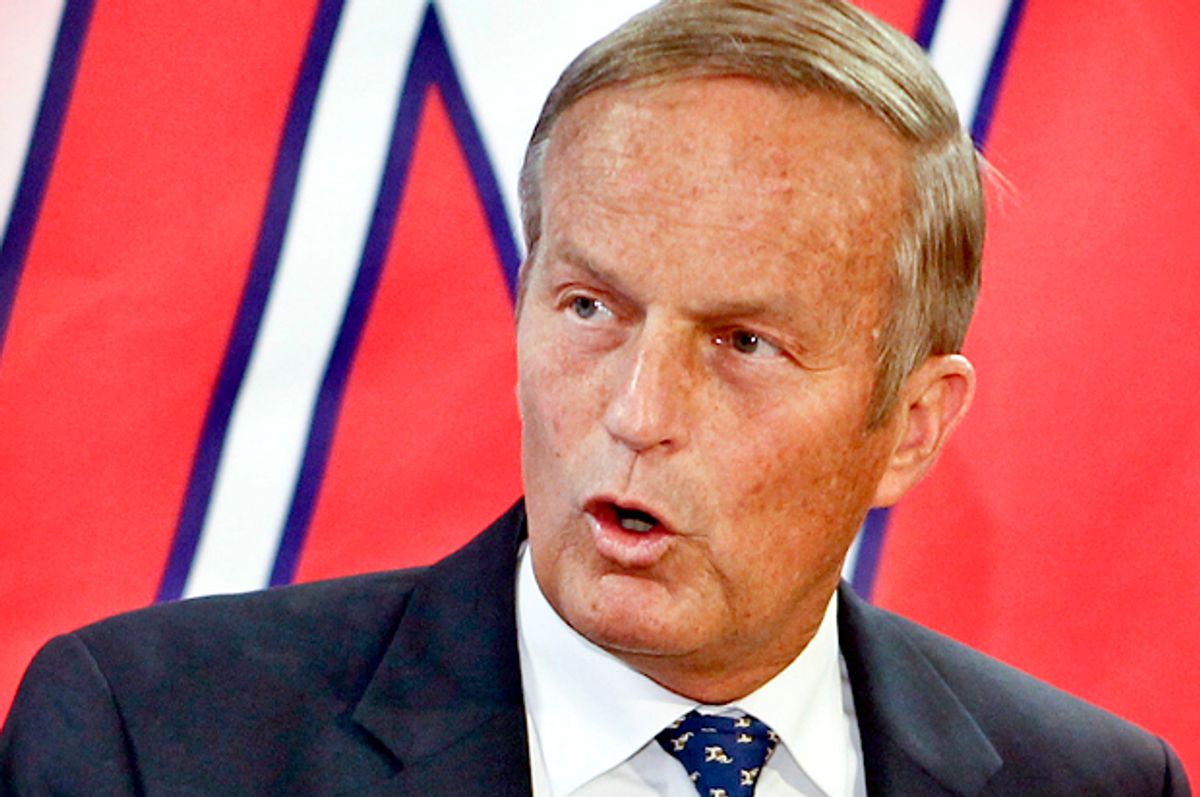 For all the official GOP efforts to put the specter of Todd Akin behind the party, the conservative firebrand refuses to go quietly into the night.

Nearly three years ago, you'll remember, Akin was all set to oust Missouri Sen. Claire McCaskill, widely considered the Senate's most vulnerable Democratic incumbent. Narrowly elected in the Democratic wave year of 2006, McCaskill confronted a more daunting political environment in 2012. President Obama and his signature health care law were deeply unpopular in Missouri, which had drifted increasingly to the right. McCaskill's approval ratings were nothing to write home about, and it seemed her only path to victory was drawing a far-right opponent. Accordingly, McCaskill and her allies waged a concerted effort to promote Akin, then a suburban GOP congressman, over his less-conservative primary opponents; one McCaskill ad touted Akin as "the most conservative congressman in Missouri." Much to the McCaskill camp's delight, Akin prevailed, taking 36 percent of the vote in the three-way primary.

But it was unclear that McCaskill's successful bid to boost Akin would pay off in the fall. A post-primary poll showed Akin leading McCaskill by 11 points, 51 percent to 40 percent. Days later, however, Akin delivered a jolt to the race when he told a local television interviewer that "legitimate rape" doesn't result in pregnancy, asserting that "the female body has ways to try to shut that whole thing down."

The rest is history. Akin surrendered his polling lead and went on to lose the election by a margin even wider than the surveys had predicted, with McCaskill blowing him out 55 percent to 39 percent.

That humiliation sounded Akin's swan song, right? Not quite. He released a memoir in 2014, blasting the GOP for abandoning him following his "legitimate rape" remarks. Party officials returned the fire, calling Akin an "embarrassment" and demanding that he shut up.

Akin shows no signs of heeding that advice:

Former Rep. Todd Akin (R-Mo.), who drew national attention in 2012 for comments about "legitimate rape," says he is considering running for office again.

Akin told the St. Louis Post-Dispatch last week that he had not ruled out a primary challenge to Sen. Roy Blunt (R-Mo.) in 2016. Akin reiterated to The Hill on Wednesday that he was considering a run for Blunt's seat.

“I think there is a high level of dissatisfaction among conservatives, that they have to some degree been pushed out of the Republican Party,” Akin told The Hill, elaborating on why he thinks Blunt may merit a primary challenge. “The sentiment is there. The Tea Party is skeptical and wants some fresh blood, not just the same establishment guys.”

Blunt's lifetime score from the American Conservative Union is 91 percent.

First, while Blunt's approval rating among Republicans is middling -- he scored 52 percent in a GOP poll this month -- primary voters appear disinclined to give Blunt the boot. The poll found GOP businessman John Brunner -- who was runner-up to Akin in the 2012 primary -- trailing Blunt by 31 points in a hypothetical match-up. (Brunner is adamant that he's not running.)

Moreover, a reinvigorated GOP establishment has fended off Tea Party challengers in the wake of high-profile disasters in 2010 and 2012. While Cantor's stunning loss to David Brat last year scrambled the narrative that right-wing primary challengers were fizzling, not a single Senate incumbent lost their primary last year, as Republican officials spent and organized big against conservative upstarts like Mississippi's Chris McDaniel who would have endangered otherwise safe seats.

Should he enter the race, Akin would undoubtedly face such an onslaught. Not only did he infuriate the party by blowing his 2012 race and subsequently lambasting the national GOP; a defiant Akin is already vowing that he'd put social issues front and center in a 2016 campaign, at a time when GOP officials are looking to turn voters' attention elsewhere.

Finally, the recently-announced candidacy of a promising Democratic contender, 33-year-old Missouri Secretary of State Jason Kander, guarantees that the GOP will pull out all the stops to ensure that Blunt is their nominee. Blunt starts out with a sizable, if not insurmountable, lead, taking 49 percent of the vote to Kander's 36 percent in a poll this month.

By jettisoning Blunt for Akin, Republicans would trade a favored conservative incumbent for an incendiary, all-but-certain loser.