As allegations mount, Fox News has gone silent—but that didn't stop O'Reilly from sneakily having his say 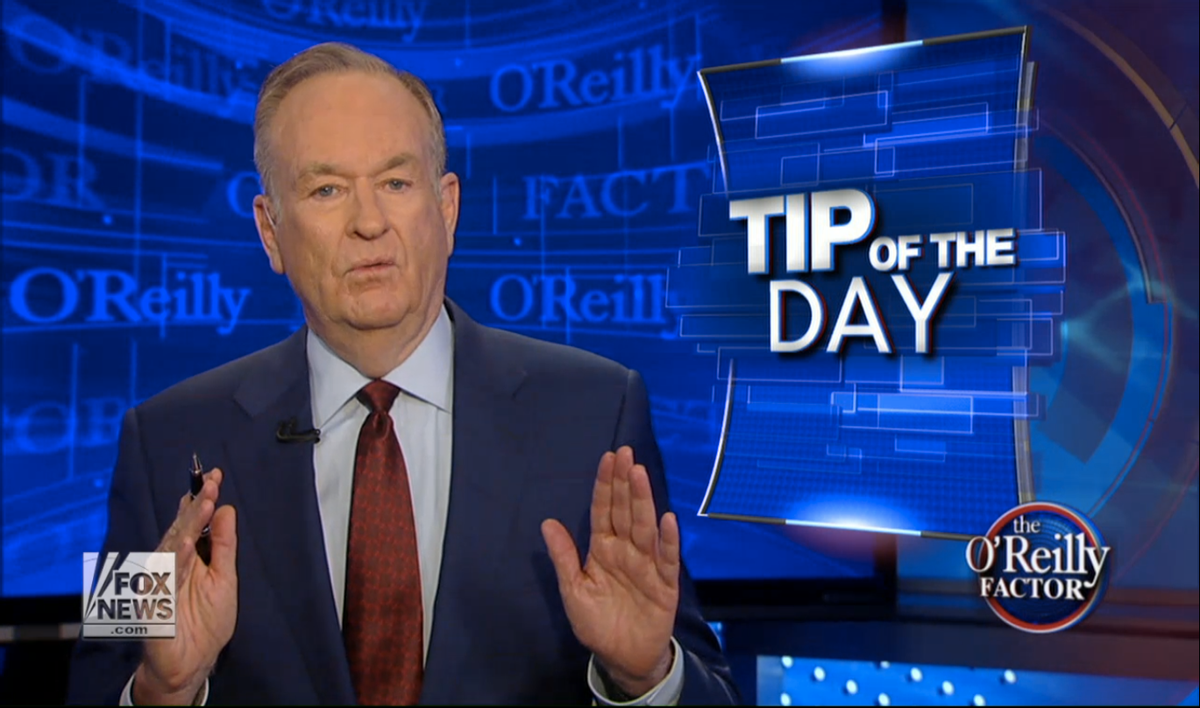 On Wednesday evening's edition of "The O'Reilly Factor," Bill O'Reilly refrained from commenting on recent accusations that he fabricated stories about his early days as a reporter. Or, at least, he didn't comment on them explicitly.

Controversy has swirled around the Fox News anchor ever since the publication last week of a Mother Jones report alleging that he had embellished his experiences as a war reporter during the Falklands War in 1982. In the days since, the proverbial floodgates opened; progressive watchdog Media Matters has reported two additional O'Reilly claims that couldn't possibly be true: The first, that he was present when a personal friend of Lee Harvey Oswald killed himself; and the second, that he had witnessed the execution of American nuns in El Salvador during that country's civil war.

After the initial Mother Jones report, Fox News adamantly defended its star anchor, and O'Reilly himself aggressively confronted the charges on air. However, as additional accounts of embellishment have arisen, the network has gone oddly silent, as Gawker points out, only commenting once: "This is nothing more than an orchestrated campaign by far left advocates Mother Jones and Media Matters. Responding to the unproven accusation du jour has become an exercise in futility. FOX News maintains its staunch support of O'Reilly, who is no stranger to calculated onslaughts." (O'Reilly, for his part, issued a brief statement to Mediaite yesterday evening before going to air.) Considered in this greater context, it perhaps makes more sense that O'Reilly hasn't commented on air about the new allegations.

"The O'Reilly Factor" did, however, include two segments last night that seemed suspiciously apropos.

In the first segment, his daily "Talking Points Memo," O'Reilly took the time to defend President Barack Obama against a spate of recent personal attacks: "Talking Points laments the haters on both sides. Smearing anyone should be unacceptable," he said. "Once and awhile a takedown is necessary, but to make a living out of gutter-sniping [is a] ticket to defeat." Of note here is the term "gutter-sniping" — one that O'Reilly has used on a handful of occasions over the years — which was the very same descriptor he used last week to describe Mother Jones' initial report on his embellishments.

In the second segment of note, during the final minute of the show, O'Reilly described the Internet as a "superhighway of defamation."

Now, it's clear to anyone with eyes and a brain that the Internet has become a superhighway of defamation. Anything goes, no accountability. That situation has a chilling effect on democracy, because falsehoods can become truth in weak minds and there are plenty of those.

If this seems like a transparent response to his detractors, O'Reilly goes on to insist that it's the wellbeing of Hillary Clinton that he's concerned for. (Uh huh.) "So here's the truth," he says in summation. "The truth really doesn't matter anymore, does it?"

Well does it, Bill?