"He makes George W. Bush and Nixon look good": Why Obama's attack on privacy is so historic 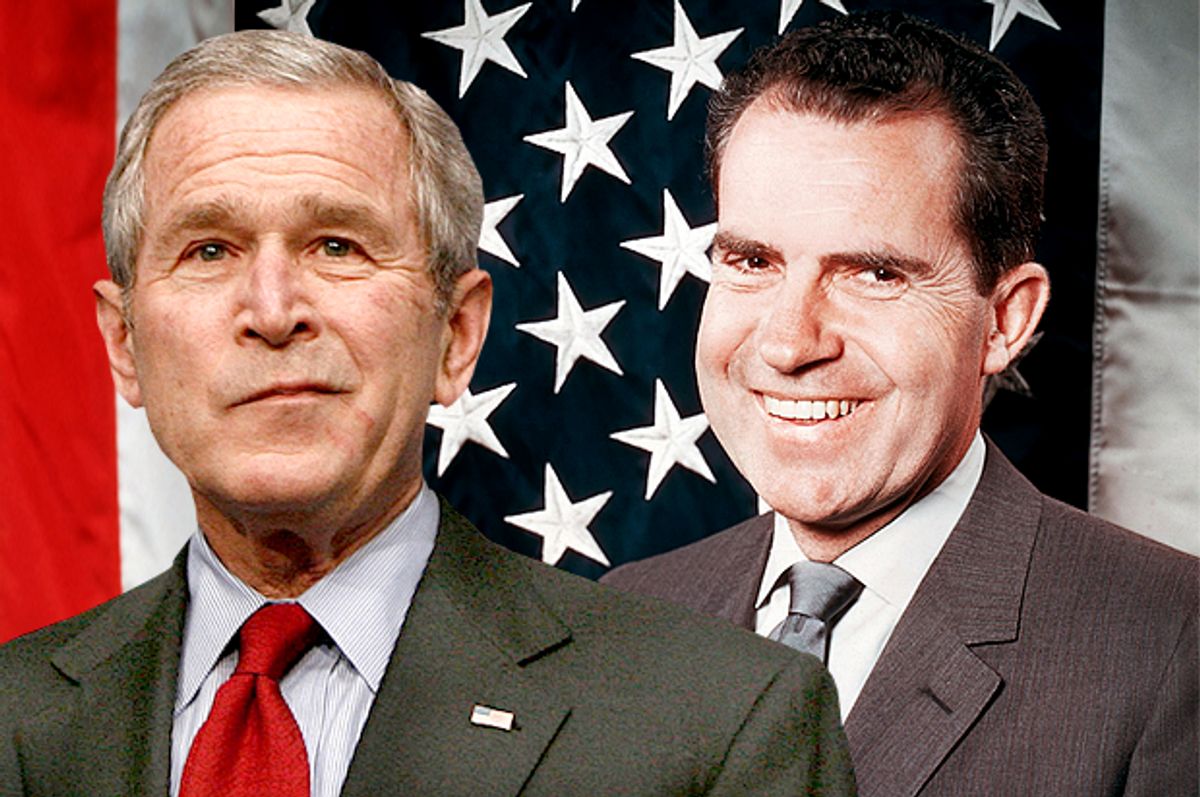 As increasingly tends to be the case, this year's edition of the Academy Awards was deemed by many to have been a boring dud. But aside from Chris Pine's tears and Patricia Arquette's clarion call for true gender equality, one of the few memorable moments of the show was undoubtedly when Laura Poitras won the best documentary award for her movie on the Edward Snowden NSA leaks, "Citizenfour." Flanked by the film's producer and editor, as well as Salon alum Glenn Greenwald, Poitras used her acceptance speech to argue that the Snowden leaks "don’t only expose a threat to our privacy but to our democracy itself."

That's a view shared by many critics of mass surveillance — and none more so than Robert Scheer, the celebrated journalist, author and founder of Truthdig. Scheer's been warning about the dangers of big data for years, but his new book, "They Know Everything About You: How Data-Collecting Corporations and Snooping Government Agencies Are Destroying Democracy," is his most thorough and detailed attack on the new status quo yet. Recently, Salon spoke over the phone with Scheer to discuss his book, the New York Times' James Risen, the essential nature of privacy in a democracy, and why the fight against the dangerous collusion between the national security state and giant tech corporations isn't over yet. Our conversation is below and has been edited for clarity and length.

What made you want to write this book?

I think the Internet is the best and worst of worlds. I love it. I edit an Internet publication and it’s been very liberating, and yet it has the seeds of very vicious surveillance and destruction of privacy. I’ve been concerned about this for some time. I think it was 1999 — I worked on a special issue of Yahoo Internet Life — and this is before 9/11 — which was warning that the government was already in the business of mining this data. It seemed to me we were indeed entering a brave new world that we were barely comprehending.

That has accelerated since 9/11 dramatically, not only because the government had license to grab this material in the name of making us safer, but also because computers are faster and the ability to store data has much expanded and the amount that people turn over freely and easily now is astounding. I think I used my thumbprint about 10 times already this morning just trying to make my iPhone 6 Plus work. If any government anywhere in the world had required you to give your thumbprint every time you did anything it would be considered the most invasive totalitarian society. We’ve accepted as normal a degree of intrusion that would have been astounding any time in history, and we do it because we’re thinking in terms of consumer sovereignty as a main expression of our freedom; we want the convenience of picking that restaurant or what-have-you.

How have WikiLeaks and the Snowden leaks changed our views of what you call our "sovereignty"?

It seemed to me what the Snowden leaks taught us was first of all that there was a great deal of connection between the private sector and the government, even to the degree of private sector, lead companies claim they didn’t know. They claim that a lot of this that was done without their knowledge or approval. The illusion that we had, that we could choose what we want to turn over about our behavior— not only what books we buy, but how far we read into a book, who we have dinner with, whatever — we assume that was in something called the private sector.

The significance of the Snowden leaks, it seems to me, is something we already knew: the degree to which this data we are turning over— ostensibly to private corporations who have an incentive to protect consumers — all the data’s been cut off at the knees by government intrusion. And not just our own government, which many people may think is benign and always well-intentioned, although the Founders warned us never to think of our government as well-intentioned and they put in these protections like the Fourth Amendment precisely to guard against their own power, power of Madison or Washington or what-have-you.

If you accept this view of a benign government it’s very clear that this data gets to be mined by any government in the world. It represents an assault on privacy that is a totalitarian assault in terms of its scope, and so that’s really what the book centers on.

Are you an optimist or a pessimist on this?

It's not necessarily a pessimistic book. When it is revealed that the companies we trust are in fact not in a position to act as truly multinational corporations and protect your customers, but rather are subservient to the power and the whims of American intelligence agencies, it threatens their business model. I was asked by Google to join the 3 million people who have already signed up asking for tougher regulation of the NSA, because Google, however complicit it was in all this, and it was, now recognizes that this threatens their business model, as it does Facebook’s and everyone else. So I think that’s a reason for optimism.

When I was covering the financial deregulation of the '90s for the L.A. Times when I was still working there, this issue of opt-in as opposed to opt-out came up. People said, the consumer should have to explicitly opt-in to allow you to use that data. That’s the first big battle on privacy that we lost, and I would like to see the discussion return to some variation of opt-in. If people are going to mine your data, third party or private organization are going to mine your data, you have a right, you should be asked, do you want that to happen?

How do you respond to people who are complacent, who are content with things being this way? What about the argument that more or less says the horse has already got out of the barn?

Well, it’s a convenient argument to be made for those who want the horse to be out of the barn, but the fact of the matter is that they resist opt-in or any other serious restraints because they know the horse can be put back in the barn. The argument against opt-in when they did the reversal of Glass-Steagall was, you’re taking the profit out of the merger. Yes! It will be more costly. Yes, it will be less profitable. Yes, you will have to query us to learn how we use our data. Doesn’t mean you’re going to destroy all profit. But it’s precisely because you know that the horse can be put back in the barn that you’re resisting these kinds of measures.

It doesn’t have to be impenetrable text that skilled lawyers can barely understand. Your consent agreement can be understandable, and it should actually be a bit alarming. Are you giving permission for this data to be sold to anybody in the world who wants to look at it? No, I don’t, and I’ll find my restaurant another way. I’ll find out what time the movie is starting another way.

James Risen recently described the Obama administration as one of the gravest threats to freedom of the press that the country's ever experienced. Would you agree with Risen on that? Will history look back on this element of the current president's record uncharitably?

Certainly on the question of surveillance. On healthcare I think Obama has done some good things, but I think the record on civil liberties and transparency is abysmal. He’s probably the worst president that we’ve had in our history — he makes George W. Bush and Nixon look good by comparison. I supported Obama. I gave money; I contributed more than I could afford; I thought this guy was going to be great. I thought he was going to be great because of the very sensible things that he said about banking and Wall Street, and about torture and national security, so I drank the Kool-Aid. I’m not going to pretend otherwise.

Plenty of people can find my columns celebrating this guy, and I just sit there scratching my head about Holder and Obama, about what happened to these guys. I think they made a compromise that Democrats have often made: be tough on national security and then you get to do your progressive domestic stuff. That’s usually the cop-out. It’s a very dangerous cop-out because the fact is national security is the ballgame. It’s what determined the degree of our civil liberty, it determines our allocation of resources--it’s the ballgame. And you can’t make that compromise, you open the door to absolute madness.

I think Risen has played a truly heroic role in defending the press, so I applaud him.

Do you think Obama and Holder have a chance to redeem themselves?

I think the problem is it’s going to get worse. I try to argue in this book that we have a national security intelligence apparatus now that is much more frightening than the one Eisenhower warned us about, and the main reason that they are so frightening is that they have a monopoly on information.

And how do you respond to those who say that these policies may make us uncomfortable but that they're a necessary response to legitimate security threats?

That's the other thing that drives me nuts about all this, the assessment of the danger we face. I’ve traveled most of the world and I’ve interviewed a lot of people, and they all could make a case for repressing freedom. I never interviewed anyone of power anywhere in the world who did not have their arguments lined up for doing bad stuff. They’ve all been victimized, they all have enemies, they all have dangers. We have a relatively minor threat to our freedom, after all we are the strongest economy, the strongest military, the biggest power that has ever existed in the world and yet it's argued that we don't know what we face. Well, what do the Israelis or Palestinians face, for that matter? What do the Chechnyans face from Russia? You look at any part of the world, and there’s a history of grievances, of fear, of concern about the enemy, about the potential attacks.

We have always told people that freedom is something that will protect you, that will save you, because you will fight in the right struggles, and you will do it in the right way, and you’ll have your people with you. And then after 9/11, we abandoned all that. We said, no we’re under attack, freedom is a luxury we can’t afford, and that is the most dangerous argument anywhere in the world.