Mike Lee at CPAC: CPAC is dumb, stop being dumb 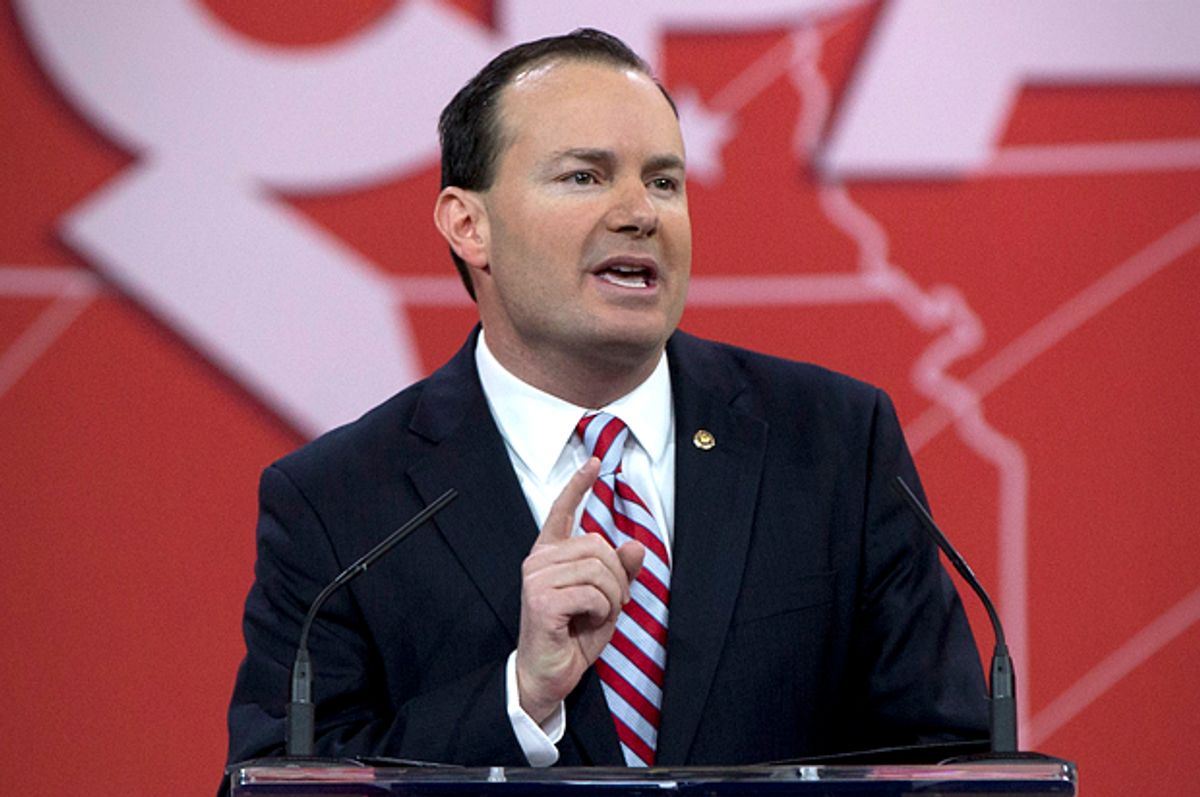 The annual Conservative Political Action Conference kicked off this morning with a refreshing and necessary speech from Sen. Mike Lee (R-UT), who used the opportunity to tell the conservative activists in the CPAC audience that Republican politics too often becomes an embarrassing parade of sideshow clowns and that they are part of the problem.

Okay, he didn’t put it that starkly, but that was more or less the message he delivered to the conservative faithful as he called for the GOP to support and elect “principled, positive, and proven” conservative candidates, and not to reward candidates whose sole talents are stimulating the reptilian sectors of the conservative brain with empty slogans and buzzwords:

LEE: We have a job to do, and that job is not just to find the guy who can shout “freedom” the loudest. … If that that’s what conservatives reward, and that’s all they reward in the next year and over the next two days here at CPAC, if that’s what they reward with cheers and standing ovations and straw poll votes, then that’s all that we, as conservatives, will ever get. Talking points, and platitudes, and empty promises. But when conservatives elevate unserious presidential candidates – candidates who are not principled, positive, and proven – it’s not the media’s fault. It’s not the establishment’s fault. It’s our fault, and we can’t let that happen.

Lee also had a challenge for the crowd: “Imagine for a moment the impression this audience could leave a candidate if each of you refused to give a standing ovation to every trite one-liner, every empty platitude, or every hollow political slogan that you hear over the next day and a half – and yeah, you will hear some of those.”

It was a bold message, a clarion call for seriousness in political discourse and a sober approach to elections and policymaking, and it was rewarded with a smattering of perfunctory applause from the people on hand to hear it.

CPAC crowds don’t want to hear this sort of thing because that’s not what CPAC is about. The people who attend are there to laugh at TelePrompTer jokes and buy “Obama is a socialist” bumper stickers and get really drunk. Lee’s speech was preceded by an address from crazy man Ben Carson, who is riding high in 2016 GOP polling because of his willingness to say outlandish nonsense about Barack Obama. His speech was one vacant pro-freedom slogan after another. During the ensuing Q-and-A he said his plan for defeating terrorists was to “destroy” them (wild applause). Later today, there will be speeches from Ted Cruz, Bobby Jindal, and Sarah Palin. All three are champions of slogan-heavy, zinger-laden politicking, and their remarks are going to drive the CPAC crowd wild.

More broadly, conservatives generally don’t like hearing that it’s their fault when they lose. Whenever a Democrat wins an election – especially a closely contested race – there’s always an exogenous factor that conservatives blame for Republican failure: ACORN stole the election, the New Black Panthers scared off voters, the liberal media was biased against their candidate, etc. The glorious infallibility of what they perceive to be conservatism has been pounded into their heads through years of conservative media messaging, which has had the effect of confusing "loudest conservative" with "most conservative."

So when Mike Lee warns about some “unserious” candidate being given undue adulation and warns “we can’t let that happen,” he’s completely wrong. Conservatives very much want that to happen. That’s why they’re at CPAC in the first place.