Rand Paul's faux-candor nonsense: Why Katie Couric had him bobbing and weaving 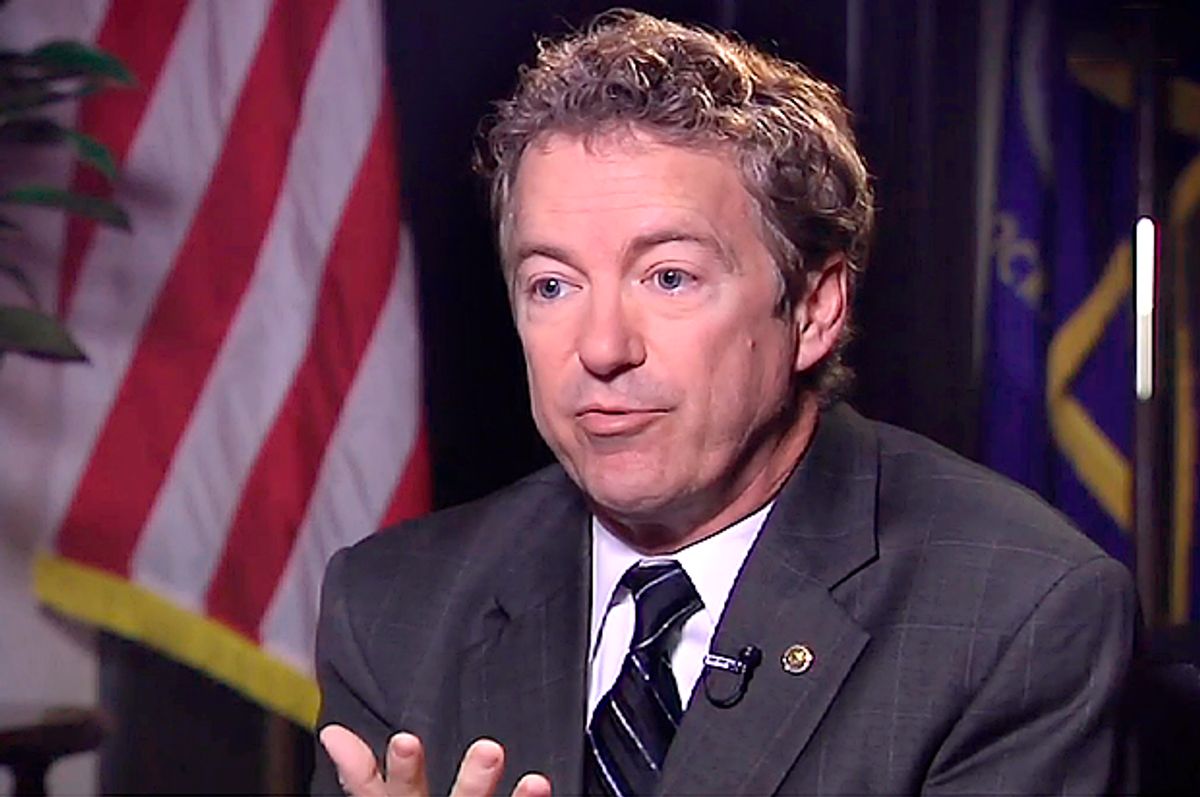 Sen. Rand Paul is gearing up for a triumphant return to the Conservative Political Action Conference Friday morning, where he’s a star. But in a warm-up interview with Yahoo’s Katie Couric, he again looked unready for the glare of a national presidential campaign. This time he didn’t “shush” the female journalist, but he wiggled and squirmed and ducked direct questions in their 17-minute interview.

The woman who dispatched Sarah Palin to the sidelines in 2008 again just did her job. Paul wasn’t Palinesque, but it’s consistently clear he’s more accustomed to speechifying and holding forth than being questioned by a reporter. He insisted the Benghazi tragedy “precludes [Hillary Clinton] from ever being considered for higher office,” explained he’d beat ISIS by arming the Kurds, and repeatedly ducked comment on his father’s recent slide back into racism when he explained that his anti-war allies in the Congressional Black Caucus “didn’t want the war because they wanted that money to go to food stamps to people here.”

But the contrast between Paul’s bold pronouncements and his inability to answer direct questions was stark. He was eloquent, and somewhat convincing, when he explained that the U.S. can’t fight wars everywhere. But when Couric asked him directly whether he thinks the president should send ground troops back to Iraq, he bobbed and weaved.

“I don’t believe in any absolute prescription against them,” he told her, adding, “I’m not ready to send millions of troops around the world.” At another point he coyly allowed “we already have [sent some ground troops], and I have not objected to it.” He went on: “I think it’s a mistake to put a half a million troops in there,” and Couric interrupted. “I’m not even asking you for a number…”

He didn’t quite shush her, but he got irritated, “I’m trying to answer the question, so you gotta let me answer the question.” In the end, we learned he would arm the Kurds to fight ISIS, and create a new Kurdistan out of parts of Iraq and Syria. Although how he’s going to get a piece of Syria without ground troops toppling Bashar al-Assad went unasked and unanswered.

He did the faux-candor routine again on questions about whether, ultimately, he will vote for a clean bill funding the Department of Homeland Security, one that doesn’t block President Obama’s executive actions on immigration. Each time Couric asked, he repeated GOP talking points about how it’s the Democrats who want to shut down the government because they won’t support a bill that blocks the president. But on Couric’s fourth try he wavered: “I haven’t decided yet because I haven’t seen what’s going to happen.”

Likewise, he wouldn’t answer a direct question about whether he’d vote for a Patriot Act extension. To be fair to Paul, Couric came with FBI talking points to jam him on his opposition to the Patriot Act, and he was very strong in explaining how he believes security agencies exaggerate terror threats. But asked whether that meant he’d vote down an extension, he answered oddly: “I will vote for the Constitution, which has different amendments.”

I honestly couldn’t tell whether he was being condescending to Couric, obstinate or just plain odd.

One place where the Yahoo journalist didn’t push back was on Paul’s repeated assertion that Hillary Clinton has disqualified herself for the presidency because “when she was asked to provide security for Benghazi, she didn’t do it” (a claim Politifact rated “mostly false”). “Not defending the consulate in Benghazi will be an albatross over her neck for the rest of the campaign, I don’t think she’ll be able to overcome it,” he insisted.

But Paul’s ultimate moment of evasion came when Couric asked him to comment on his father’s latest outbreak of racism, this time in an interview with his longtime buddy, known racist Lew Rockwell – that’s the guy Ron Paul blamed for writing his racist newsletters back in the '90s, you’ll recall. Paul took a deep breath and dove in:

“You know, I have a good relationship with the Congressional Black Caucus,” he told Couric. “I met with them yesterday, with the president, on criminal justice reform…I think we have a great relationship.”

The anchor pushed: "And what’s your comment on your dad’s remarks?"

“I think my comment would be I have a great relationship, you know, with the Congressional Black Caucus,” Paul said again. “I think I’ll be judged on my own actions.”

It sounded a little like Donald Trump’s famous insistence “I have a great relationship with the blacks,” but in Paul’s case, his work on criminal justice reform, at least, is real.