The right's fear of education: What I learned as a (former) conservative military man

Why are Republicans constantly bashing college these days? I was one of them -- and the answer may surprise you 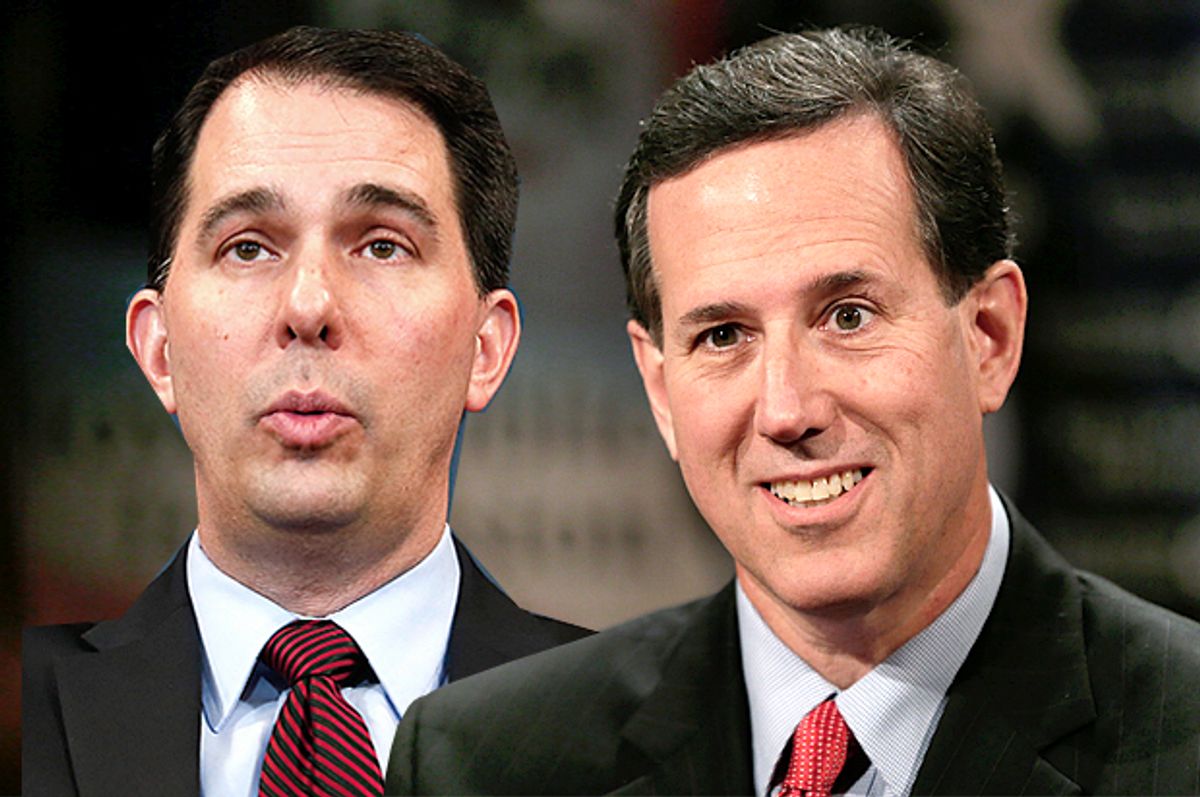 My first college experience was failing half my classes at the University of Nevada Las Vegas in 1992.  The highlight was getting a “D” in English 101.  Like many small town kids, I was overwhelmed and underprepared.  I dropped out of UNLV, joined the military and got married.  Being a 20-year-old father and “enlisted” man showed me exactly how not to live, so I started a backward, fumbling and circuitous process of getting my undergraduate degree.  In seven years, I attended four community colleges, a university on a military base and attended military journalism school.  I pieced the whole mess into a bachelor’s degree from Excelsior College, a credit aggregator that caters to military members.

Modern conservative politics push the notion that people who flip switches, burgers or bedpans don’t need “education.”  They instead need “job training.”  In Wisconsin Gov. Scott Walker’s budget, someone crossed out this phrase: “to extend knowledge and its application beyond the boundaries of its campuses and to serve and stimulate society.”  And added this instead: “to meet the state’s workforce needs.”  Walker backed down on the language change when it was exposed, claiming it was a “mistake.”  Really it was just one more tired attack on the idea of education as a public good, one that helps people find fulfillment and meaning.

I value education more than many people, because I struggled so hard to get it.  I had a bad elementary school experience, failed the fifth grade, muddled through high school and dropped out of college.  Teachers were always kind to me, saying things like, “He’s clever, but lazy.”  They were wrong about me, just like when Republicans are always wrong about poor people being lazy or stupid.  When I failed out of college the first time I was working a full-time job far above 40 hours a week, while also going to school.  I was most worried about making a living, and my skill set mirrored that of so many in the working class: Work hard, day in and day out and be grateful.  Educational success has little to do with innate intelligence or “goodness” and almost everything to do with class, upbringing and privilege.

I also viewed education with suspicion bordering on paranoia. I came from a rural mining town in Nevada where I knew mostly blue-collar men who neither needed nor wanted a college education. Listening to adults talk they always had a favorite villain: the person who jumped ahead in line and got a job or promotion, only because he or she had a college degree.

I have my own children now, and I know the limits of parenting.  Children heed your example far more than your advice.  It’s painful to watch your children struggle. It was the same for my conservative family who encouraged me to go college. They weren’t able to offer any meaningful guidance or help, and it was not their fault.  First generation college students, like me, face an impossible climb.  If you add in conservative hostility to education, it gets that much harder.

After getting a bachelor’s at 27, I went back to graduate school to study 18th century British literature at California State Hayward.  I landed a new job in Reno and moved to the University of Nevada, Reno, finishing a master’s in English there.  A few years later, I went back again, this time for a master’s of fine arts in creative writing from Antioch University Los Angeles, a school that emphasizes social justice—for many conservatives, a coded phrase that means “liberal.”  Even as a libertarian attending a liberal college, people went out of their way to be both kind and tolerant to me.  My preconceived notions about the “evil liberals of the ivory tower” looked more ignorant and narrow by the day.

Before college, I voted conservative, hated gay people, loved America and served my country in the armed services.  I’ve changed because of many factors, but I know that college and graduate school made a difference. I met people unlike myself and was forced to defend sometimes ugly political positions.  The Tea Party thrives on blue-collar “common sense” that is composed of a combination of ignorance, superstition and fear. A literate and educated populace is an existential threat to the kind of thoughtless rage that has consumed the right over the past few years.

When I write about how my politics evolved over a lifetime from conservative to liberal, people in the comments section (note: never read Internet comments) like to point out my “liberal arts degrees.”  Even my own friends like to remark on my MFA, usually by asking me to whip them up a “grande cappuccino.”  It’s funny, and I go right along with the joke too.  I understand the reality of trying to earn a living with an arts degree. At the same time, it’s troubling that educational fulfillment has turned into a punch line, even among those who believe in it.

Some people on the right are very educated. Rick Santorum holds an MBA and a JD (with honors, no less), and his vehement hatred of college seems to stem from his kooky take on religion.  Modern politics is drawing bizarre new battle lines between “family values” and a halfway decent education.  American Christians may dislike “Islam,” but they share a lot of opinions with the radical Islamic group “Boko Haram,” a name that itself translates into “education is forbidden.” In our own country, we have a massive and growing group of people who would rather have illiterate children than let their kids learn anything that contradicts their most extreme religious views.

I know many thoughtful, educated and even liberal people who hold deep faith.  Despite my own personal atheism, I accept the authentic religious experiences of others, but I’m troubled by a growing chorus of denial on climate change, evolution and the age of the planet.  Anti-intellectualism may be an American tradition, but when “mainstream” politicians embrace ignorance, education ends up as collateral damage.

“Serious” presidential candidate Scott Walker seems to have a problem with evolution, sounding like an idiot, most recently while in England. Unlike Rick Santorum who is an overeducated hypocrite, Walker lives the life of a true education hater. Asked about not finishing his undergraduate experience (which I'm not necessarily attacking), Walker said, “The reason I went to college, in large part, was not just to get an education for an education’s sake, but to get a job." For too many politicians, it all comes down to money.

In America, to our everlasting shame, money is the absolute yardstick of goodness. I like money just like anyone, but many other things have brought me as much or more satisfaction: being a father, writing an essay or seeing a new part of the planet.  It’s easy to pick on poetry, humanity or art degrees.

I was able to go back to school in large part because my military service made it affordable. The GI Bill paid for both my master’s degrees. My background and rough start make me an unlikely champion of college education.  I’ve also been socially adjusted for my whole life to feel like a pretentious asshole and a fraud every time I bring it up.  But education makes a difference in people’s lives.

That’s why sensible people need to stand up against the vilification of education. A good start is to support Barack Obama’s free community college initiative. I earned most of the credits for my very first undergraduate degree at community colleges, and those classes kickstarted my interest in school. It’s hard to see how I would have ever overcome my own barriers without the patience of many community college instructors. Obama’s plan to fund community college will not only make our country a better place but will also improve, even slightly, the state of our shared humanity.

And to acknowledge the “other side,” education does help people find good, fulfilling jobs.  Even my “slapped together” bachelor’s degree helped launch me into a career in public relations. The job has more than sustained me and my family, while also allowing me to explore my own outside interests.

Some days I wish I could use my graduate education to find a full-time academic job, but I passed up too many opportunities and wasted too many years fumbling around. Academic jobs and humanities scholarship itself are under assault, just like so many other valuable parts of America. I’m probably a coward, but I also don’t like the idea of leaving my longtime profession to start all over. Besides, there is inherent value to education even if someone isn’t paying you for it. I know my life would be less satisfying without it. For instance, if I had turned my back on education, I could have ended up as an ignorant asshole trying to turn back the very hands of human progress, much like the party to which I once belonged.