The lurid coverage of war and terror as ratings catnip is back, and worse than ever. Here's what happens next 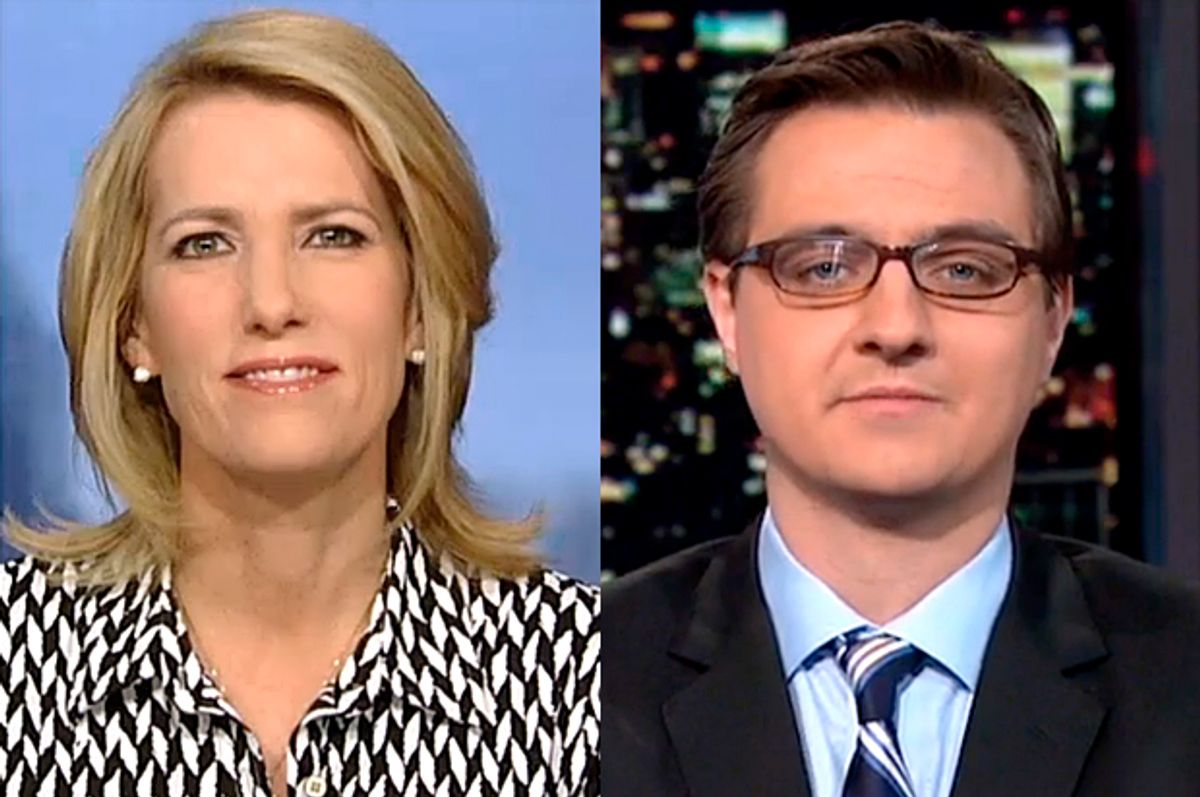 Sometimes watching cable news these days is literally sickening to watch. And no I'm not just talking about any random segment featuring Fox News' Steve Doocy. All the networks are basically trafficking in violent pornography these days. (And no, I'm not talking about the breathless reporting of the "50 Shades of Grey" box office.) I'm talking about the endless loops of lurid, graphic footage of terrorist propaganda being beamed into Americans' living rooms 24/7.

First there are the chilling images of hostages who know they are about to be executed. The news networks pretend they are being responsible by just showing stills of those moments, but it makes no difference. We know the context and it is devastating. The terror of the situation comes right through the screen. And it comes through over and over again, hour after hour. No one with any sense of humanity could see them and not be utterly horrified.

But perhaps even more frightening is the endless airing of stock footage showing terrorist training camps and frightening men dressed in black Ninja style gear looking menacingly into the camera. Over these pictures are the words of various talking heads, politicians and alleged experts drumming up shock, hysteria and fear. It's surely a ratings grabber or they wouldn't do it so relentlessly.

And it doubtlessly serves the purposes of people who want to draw the world into more war in the middle east without a proper debate or understanding of the stakes and and the cost. It isn't the first time this has happened, is it? In the wake of 9/11 the news networks caught such a bad case of war fever that they were unable to distinguish where 9/11 ended and the Iraq war began. The images of the first blurred into the second to such an extent that the public had a hard time telling the difference. And that was exactly what those who wanted to take advantage of the chaos and fear from 9/11 to invade Iraq intended.

President George W. Bush's consiglieri Karl Rove had a saying: "politics is TV with the sound turned off." And if you turned off the sound in those days you could see the story that those people were telling in pictures: the World Trade Center being hit, President Bush on the rubble, Saddam Hussein giving a speech, terrorist training camps, American soldiers (and reporters) in uniform, Donald Rumsfeld at the podium, chyrons running across the bottom of the screen juxtaposing Al Qaeda one minute with Saddam the next, maps of the middle east.

We don't know to what extent the news media did this purposefully. Some of it was clearly just following the zeitgeist and succumbing to their own fears. But we do have some indications that networks were consciously beating the war drums for ratings. MSNBC, for instance, famously fired commentator Phil Donohue out of concern that the network would be "a home for the liberal anti-war agenda at the same time that our competitors are waving the flag at every opportunity." Chris Matthews, who now claims that he was against the Iraq war, was instrumental in engineering his departure because Matthews feared he "would bring down the network" with his skepticism over Iraq.

And there was the firing in April 2003 of Ashleigh Banfield (the reporter who had shot to fame for her intrepid reporting from the streets of New York on 9/11) after she gave this speech:

I suppose you watch enough television to know that the big TV show is over and that the war is now over essentially — the major combat operations are over anyway, according to the Pentagon and defense officials — but there is so much that is left behind. . . .

That said, what didn’t you see? You didn’t see where those bullets landed. You didn’t see what happened when the mortar landed. A puff of smoke is not what a mortar looks like when it explodes, believe me. There are horrors that were completely left out of this war. So was this journalism or was this coverage?

There is a grand difference between journalism and coverage, and getting access does not mean you’re getting the story, it just means you’re getting one more arm or leg of the story. And that’s what we got, and it was a glorious, wonderful picture that had a lot of people watching and a lot of advertisers excited about cable news.

But it wasn’t journalism, because I’m not so sure that we in America are hesitant to do this again, to fight another war, because it looked like a glorious and courageous and so successful terrific endeavor, and we got rid of a horrible leader: We got rid of a dictator, we got rid of a monster, but we didn’t see what it took to do that.

When I said the war was over I kind of mean that in the sense that cards are being pulled from this famous deck now of the 55 most wanted, and they’re sort of falling out of the deck as quickly as the numbers are falling off the rating chart for the cable news stations. We have plummeted into the basement in the last week. We went from millions of viewers to just a few hundred thousand in the course of a couple of days. . . .

I think there were a lot of dissenting voices before this war about the horrors of war, but I’m very concerned about this three-week TV show and how it may have changed people’s opinions. It was very sanitized. . . .

This TV show that we just gave you was extraordinarily entertaining, and I really hope that the legacy that it leaves behind is not one that shows war as glorious, because there’s nothing more dangerous than a democracy that thinks this is a glorious thing to do.

War is ugly and it’s dangerous, and in this world the way we are discussed on the Arab street, it feeds and fuels their hatred and their desire to kill themselves to take out Americans. It’s a dangerous thing to propagate. . . .

She is on CNN these days. It took her the best part of a decade to get back.

And here we are again in 2015, with the Big TV Show Redux, day after day. Leading warhawks like Senator Lindsay Graham are telling anyone who will listen that America is under attack:

This is not about bringing a few people to justice who behead the innocent in a brutal fashion. It's about protecting millions of people throughout the world from a radical Islamic army. They are intending to come here. ...

There is no way in hell you can form an army on the ground to go into Syria, to destroy ISIL without a substantial American component. ...

This is a turning point in the War on Terror. Our strategy will fail, yet again. This president needs to rise to the occasion before we all get killed here at home.

And just this week even the administration joined in by flogging a vague threat to U.S. shopping malls from an obscure Somali terrorist group. (Granted some of that may have had to do with the more likely imminent threat of the GOP shutting down the Department of Homeland Security, which may even be worse.)The networks, predictably, went wild with more Ninja-style footage juxtaposed with America's Cathedral of Capitalism, The Mall of America and footage of the horrific terrorist attack in the Nairobi shopping mall a couple of years ago.

However, there is one commentator who has been resisting this storyline: Chris Hayes of "All In" on MSNBC. For months he's been making the case that this lurid coverage is not only creating the conditions for war without any proper debate, it's playing into the terrorists' hands. When Fox's Bill O'Reilly recently declared that we are in a "Holy War" with Islam, Hayes said on his program:

"That sort of rhetoric is, of course, exactly what ISIS wants. For if this is a Holy War, they aren’t some murderous cult or some fringe Sunni militia. No, if it’s a Holy War, then they are the representatives of Islam, which is why the president at today's summit on countering violent extremism was so careful not to cast the fight on those terms.”

These terrorists produce this propaganda for recruitment purposes but produce them with slick production values for U.S. and other western media in order to try to make the US the common enemy of all Islam.  Hayes is one of the only cable news hosts to explicitly challenge not only the Holy War meme, but the reaction of the media to every alleged threat.

But he is on the same page with one very unlikely Fox News personality. Here's Laura Ingraham, of all people, talking about the shopping mall threat assessment:

"I don’t think we should jump every time the freaks with the ACE bandages around their faces put out videos... I think we should have a mature debate about how to secure the Homeland without changing our way of life."

Amen sister. I was incredibly gratified to see Laura Ingraham making essentially the same point about terrorist propaganda that we have been making consistently on this show which is that everyone needs to stay calm and rational in the face of what is obviously emotional manipulation, by people whom we all agree are invested in our emotional manipulation and who achieve emotional manipulation in large part with propaganda videos demonstrating their brutal tactics. But the ability of Al-Shabaab or Boko Haram or ISIS to murder people they've captured or make videos of those murders does not correlate in any meaningful way to an actual threat they pose to Americans here in the U.S. Nor does it correlate to its military potency.

He went on to discuss a a recent analysis by Zack Beauchamp showing that ISIS is, in fact, losing ground militarily and dolefully added, "if you've been watching the national news coverage of ISIS, Beauchamp's report feels like it might as well be coming from Mars."

Oh, and in case you were wondering, Chris Matthews has joined the war party once again. Hysterically declaring that moving on without taking strong action is not an option because “the alternative is too sick, too un-American, too inhuman" and "we cannot act like America… is not being morally humiliated."  One cannot help but wonder if he's the network source who is whispering to anyone who will listen that MSNBC is to going to have to "move away from left-wing TV."  It wouldn't be the first time.